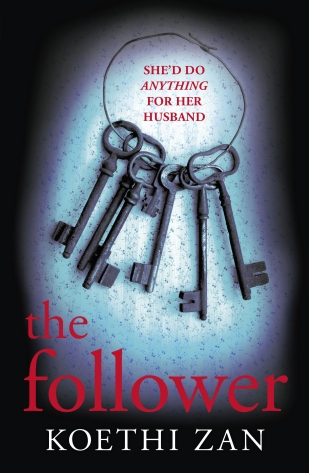 “SHE’D DO ANYTHING FOR HER HUSBAND.

Julie has the perfect life

A kind boyfriend, loving parents and good grades. She has everything ahead of her.

Cora’s life is a nightmare

A psychopath for a husband, a violent father and a terrible secret. There’s no way out.

But one night, their worlds collide

Locked in an isolated house together, they must work out what has happened – and who they can trust to set them free.

From the bestselling author of The Never List, this is a breath-taking new thriller about the wife of a kidnapper and her relationship with his last victim.”

I am delighted to welcome you to my stop on the The Follower blog tour.  The Follower is author Koethi Zan’s second novel after her brilliant debut, The Never List (which I absolutely loved by the way!).  I, for one, can’t wait to read this book so look out for a review coming to damppebbles soon!

Today I am thrilled to be hosting a character spotlight.  So without further ado, let’s find out more about Cora:

Cora Jenkins will do anything for her husband.

The seeds of her dysfunction were planted in her difficult childhood on the run with her alcoholic father. He changed their names as often as their towns and raised her in an atmosphere of violence and neglect. Later, falling in with the wrong high school crowd has severe consequences for her, making her particularly vulnerable to the persuasive powers of James Jenkins, an itinerant preacher looking for a cult following. Her feelings muddled by guilt and desire, she manages to push rational thoughts out of her mind enough to embrace the fantastical scenario James concocted. She needs what he offers and refuses to recognise that he is actually a failure, a shyster, and mentally ill. Instead, she sees only her distorted vision of spirituality, home, and power. Believing she’s failed on her own, she clings to James as a way to build the more secure life she always wanted.

Cora will do anything to preserve this fake world, embracing his fantasy as her own. As James takes each step toward evil, she follows him devotedly, ready to implement his sick desires without question. Anything to keep the farm, to beat back her own guilt, to forget the mistakes of her past.

But then James abducts Julie Brookman, a smart, pampered rich girl who refuses to go down without a fight. Worse still, he leaves Cora alone with her. Cora has never faced anything like this and suddenly has to confront the despair that was always right beneath the surface of her dream.

Julie—it turns out—is a worthy adversary, knowing enough to mess with Cora’s twisted mind. She intuitively senses Cora’s enormous psychological strain, and decides to push her to the limits in the hope of cracking her delicate psyche. But Cora is playing her own game, and the inner strengths of her youth come raging back within her. Their battle forces her to confront her past and the sacrifices she’s made, and desperately search for a way to hold on to everything she wants, no matter what the cost.

Oh wow, I was excited to read this book but having read Cora’s spotlight, I want to read it even more! It’s official, The Follower has moved up several places  on the TBR.

The Follower by Koethi Zan was published in the UK by Vintage B0oks | Harvill Secker on 23rd February 2017 and is available in eBook format (with the paperback to follow later this year) | amazon.co.uk | amazon.com | Goodreads |

When Koethi Zan was born in the sleepy farming town of Opp, Alabama, the “City of Opportunity,” her mother was Valedictorian of the local public high school and her father the star of its football team. Her parents named her after the homecoming queen of Lurleen B. Wallace Junior College, perhaps hopeful that some of that glory would rub off on her.

But Koethi would never be a homecoming queen. In fact, she spent most of her youth in her room, reading, listening to Morrissey, and avoiding everything connected to high school football—not an easy task in those parts.

After graduation, Koethi put herself through Birmingham-Southern College with scholarships and a small “cow fund” courtesy of Molly, the Charolais heifer she’d received as her third birthday present. She used the money wisely, travelling to New Orleans on the weekends to hit the club scene, almost always in silver-sequined costume, surrounded by transvestites, Goth kids and her gay male entourage. Perhaps, in some roundabout way, she had fulfilled her homecoming queen destiny after all.

Then, in what may have been a misguided fit of pique, Koethi threw away her all-black daywear and her thrift-store evening gowns, and went to Yale Law School, with some vague idea of becoming a film producer. Afterwards, however, she unexpectedly found herself twenty-eight stories up in the Manhattan offices of Davis Polk & Wardwell, a prestigious white shoe law firm that represented mostly investment banks. She regularly pulled all-nighters working on secured financings and revolving credit facilities. She tended to wear demure black pantsuits, with her hair up.

It didn’t take her long to realize corporate life wasn’t for her, and Koethi spent the next fifteen years practicing entertainment law both in private practice (at Paul Weiss Rifkind Wharton & Garrison and, later, Schreck Rose & Dapello) and in-house business and legal affairs positions (for the film producer, Ed Pressman, and, most recently, at MTV), with a slight detour along the way to study cinema at NYU’s Tisch School of the Arts.

Then, while Senior Vice President & Deputy General Counsel at MTV, she decided to fulfill a lifelong dream on the side, and in the early mornings she wrote a crime novel, The Never List.

Now, coming full circle in a way, Koethi, her husband, Stephen Metcalf, and their two daughters, live in an old farmhouse in a rural community in upstate New York. Her husband occasionally watches a football game on television. But her daughters have never even heard of homecoming queens. 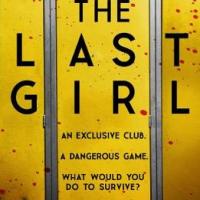