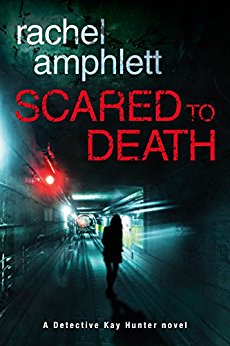 “If you want to see your daughter alive again, listen carefully.”

‘When the body of a snatched schoolgirl is found in an abandoned biosciences building, the case is first treated as a kidnapping gone wrong.

But Detective Kay Hunter isn’t convinced, especially when a man is found dead with the ransom money still in his possession.

When a second schoolgirl is taken, Kay’s worst fears are realised.

With her career in jeopardy and desperate to conceal a disturbing secret, Kay’s hunt for the killer becomes a race against time before he claims another life.

For the killer, the game has only just begun…’

I have a terrible habit.  It’s not a secret, I’ve mentioned it on the blog before.  But it’s something that I’m determined to break as it causes undue stress and adds to my heightened levels of confusion.  I’m rubbish at starting a series with the first book.  Yup, you read that right, I’m one of THOSE people.  I always end up starting part-way through, normally somewhere between book 2 or 7!  I haven’t always been this way.  I blame the blog.  It used to be a strict rule of mine that if I hadn’t read the beginning of the series there was no way I was going to read later books.  Like I say, I blame the blog.

In a couple of weeks time I am hosting a stop on the Will to Live blog tour.  Will to Live is the second book in the DS Kay Hunter series written by author, Rachel Amphlett.  The first book is called Scared to Death and ladies and gentleman, I am delighted to confirm that I have managed to squeeze it into my reading schedule.  Yes dear reader, I have started a series with the first book!  Yay, go me!

And what a first book!  I featured on the Scared to Death blog tour towards the end of 2016.  If you click here you can read Rachel’s brilliant guest post about the editing process.  At the time I felt I was really missing out as the reviews from fellow bloggers were fantastic.  And in all honesty, I was.  This is a fantastic start to what promises to be an outstanding series.  The book starts with a bang and I was immediately drawn into the story.  Seventeen year old Melanie is missing and her frantic parents, Tony and Yvonne are racing to find her after having dropped the £20k ransom off elsewhere.  They find her…but it’s too late.  What no one realises is what appears to be a kidnapping gone wrong, is a whole lot darker.  And so the hunt for a psychopath begins….

DS Kay Hunter is an appealing character.  She’s not the usual fusty, grumpy, addiction riddled detective I tend to like in my crime novels but that didn’t matter on this occasion.  There is mention of an incident in the past which was thoroughly investigated, and feelings are still running high amongst Kay’s senior management.  You’re given the impression that Kay is totally innocent of any wrongdoing and I hope this will be covered in more detail in future books.  I’m curious about her.  As I said, she isn’t my usual type of detective but I really liked her!

You find out who the killer is quite early on in the story but you’re left wondering who their accomplice is; who is the guy/gal at the top of the tree pulling the strings?  I was drawn in from that fantastic opening until the very end.  A wonderfully intriguing story which is skillfully told.

However, there was one point which caused an issue for me.  One of the investigating team has a strong link to one of the kidnap victims but it is not mentioned until much later in the story.  I found this, for me, upset the flow of the plot somewhat.  Just as the adrenaline is starting to pump, just as the action is picking up, this ‘connection’ is thrown into the mix and it just felt wrong.  I’ve pondered on this since finishing the book but I’m afraid I still can’t fathom the reason for this.  This is a small moan though in what is a fabulous book written by a talented author.

Would I recommend this book?  Oh yes, I would.  I can’t wait to make a start on Will to Live ready for my stop on Sunday 9th April so make sure you join me then.  Rachel Amphlett has created a gutsy female detective who I really like and I can’t wait to read more!

I chose to read and review an eARC of Scared to Death.  The above review is my own unbiased opinion.

Scared to Death by Rachel Amphlett was published in the UK by Saxon Publishing on 3rd December 2016 and is available in paperback and eBook formats (please note, some of the following links are affiliate links) | amazon.co.uk | amazon.com | Waterstones | Goodreads | Rachel Amphlett’s online eBook store |

Rachel Amphlett is the bestselling author of the Dan Taylor espionage novels and the new Detective Kay Hunter series, as well as a number of standalone crime thrillers.

She is a member of International Thriller Writers and the Crime Writers Association, with the Italian foreign rights for her debut novel, White Gold, being sold to Fanucci Editore’s TIMECrime imprint in 2014, and the first four books in the Dan Taylor espionage series contracted to Germany’s Luzifer Verlag in 2017.

14 thoughts on “#BookReview: Scared to Death by Rachel Amphlett (@RachelAmphlett)”