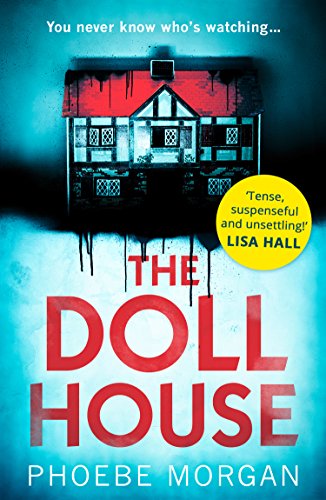 Corinne’s life might look perfect on the outside, but after three failed IVF attempts it’s her last chance to have a baby. And when she finds a tiny part of a doll house outside her flat, it feels as if it’s a sign.

But as more pieces begin to turn up, Corinne realises that they are far too familiar. Someone knows about the miniature rocking horse and the little doll with its red velvet dress. Someone has been inside her house…

How does the stranger know so much about her life? How long have they been watching? And what are they waiting for…?

A gripping debut psychological thriller with a twist you won’t see coming. Perfect for fans of I See You and The Widow.”

I was a very lucky little blogger recently as I won a copy of The Doll House by Phoebe Morgan on Twitter.  I had seen this book mentioned in booky circles over the Summer and had picked up several flyers about it in Harrogate, waaaay back in July.  Regular readers of the blog will know that I love a scary tale and The Doll House, with that striking cover and intriguing blurb grabbed my attention and sank it’s dastardly teeth in. I just HAD to read this book!  So much so, I suggested the author take out a restraining order when she asked those who were keen to win a copy to comment on her Twitter feed!

I must also say a very happy publication day to Phoebe Morgan and the team at HQ Digital!  Please accept my most humble apologies for sort of, kind of, suggesting I would stalk you otherwise.  Whoops…

The Doll House is a tale of two sisters; Corinne and Ashley.  The story focusses mainly on Corinne and her boyfriend Dominic, with her sister, Ashley and husband, James playing a smaller yet necessary part in proceedings.  I want to get this out there as early on as possible and say that I found Corinne hard to like.  She felt a little…weak and whiny to me.  She couldn’t be in an unexpected situation without the support and reassurance of her boyfriend.  Others won’t, of course, feel the same as I do.  In fact, I’m pretty sure she will be loved by many readers.  At times I wanted to give her a good shake and remind her that we live in the 21st century and woman do not need a man riding to their rescue on a white steed.  As I progressed through the book though, I got the impression that the author had written Corinne’s character to be exactly as I had experienced her.  She certainly lacked a backbone…until it was needed.  Until everything she believed in and loved was on the line.  Then, and only then, did Corinne shine for me.  Saying that, if I found myself in some of the situations Corinne does, then who knows how I would cope!

I found it much easier to relate, and like Corinne’s older sister, Ashley.  Ashley is the mother of three children; one baby, one eight-year-old and one sulky teen.  In order to ‘adult’ she works part-time in the local cafe, which is pretty much the only grown-up conversation she has, as her husband works from dawn till night in publishing.  Or that’s what he tells her anyway (NB. my husband does not work such long hours nor do I suspect him of extra-marital doings so I may relate, but not totally, lol!).  I liked Ashley. She didn’t moan, she wasn’t a daddy’s girl like her younger sibling.  She just got on with life and that made her my favourite character in this great book.

Corinne and Dominic’s life is controlled by the need for a baby.  After several failed IVF attempts the couple are reaching the end of their very worn tether.  Whilst this subplot was interesting I did feel it took over the story a little at times.  I wanted a little more threat and impending doom, a little less longing and heartache.  But that’s just me and my bloodlust!  I did enjoy the way in which Corinne’s fear built as she started to receive the tiny doll house furniture pieces.  I loved the way she was the only character in the entire book to see something wrong and sinister with them whilst her loved ones fobbed her off, thinking she was being over-sensitive and hormonal.

The Doll House contains some chapters which are split into the present and the past.  I loved the ‘past’ sections as they had a sinister edge to them.  You weren’t sure who was narrating these sections but you were fully aware that they were doing something they shouldn’t have been.  I loved the way the narrator of these sections aged throughout the book.  It’s obvious to the reader that they are very young to start with but as you approach the end, this character is no longer a child and is hellbent on one course of action.  Brilliant, and wonderfully intense!

Would I recommend this book?  I would.  I promise I’m not being derogatory when I say the end of this book was my favourite part.   It was action packed, a little bit violent (but not too violent for the squeamish readers) and incredibly satisfying.  I can’t go into details but oh my gosh, what a gratifying conclusion.  Phoebe Morgan is certainly an author to watch out for based on this, her debut.  I’m looking forward to reading more.

I chose to read and review an ARC of The Doll House.  The above review is my own unbiased opinion.

The Doll House by Phoebe Morgan was published in the UK by HQ Digital and is available in eBook format | amazon.co.uk | Goodreads |

Phoebe Morgan is an author and editor. She studied English at Leeds University after growing up in the Suffolk countryside. She has previously worked as a journalist and now edits crime and women’s fiction for a publishing house during the day, and writes her own books in the evenings. She lives in London and you can follow her on Twitter @Phoebe_A_Morgan. The Doll House is her debut novel.