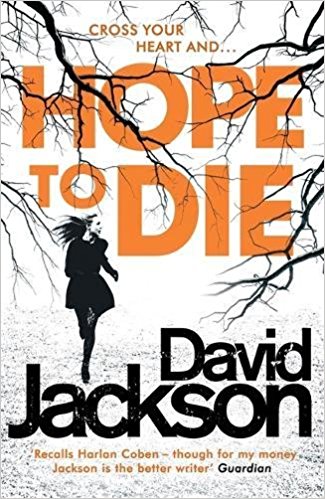 “On a bitterly cold winter’s night, Liverpool is left stunned by a brutal murder in the grounds of the city’s Anglican Cathedral. A killer is on the loose, driven by a chilling rage.

Put on the case, DS Nathan Cody is quickly stumped. Wherever he digs, the victim seems to be almost angelic – no-one has a bad word to say, let alone a motive for such a violent murder.

And Cody has other things on his mind too. The ghosts of his past are coming ever closer, and – still bearing the physical and mental scars – it’s all he can do to hold onto his sanity.

And then the killer strikes again . . .”

I am thrilled to be today’s stop on the Hope to Die blog tour.  Hope to Die is the second book in the DS Nathan Cody series and one of my most eagerly anticipated reads of the year.  I read the first in the series, A Tapping at My Door last year when it was first released and WOW, I absolutely loved it.  Click here to read my five-star review.  So much so it made it to my books of 2016 list.  I had incredibly high hopes for this second instalment.

And having read (read = devoured) Hope to Die I can confirm that I am not the slightest bit disappointed; this book was well and truly worth the wait!  Dare I even go as far as to say that I preferred it ever so slightly to the first book?  Hmmm……

DS Nathan Cody is one damaged copper.  Having been involved in an undercover mission which went dreadfully wrong several years ago, Cody has yet to shake the guilt and the terrors viciously pummelled into him that night.  A word to the wise, if you feel any sort of unease when it comes to evil clowns then this may not be the book for you.  I am terrified of the blighters but found some strange, perverse enjoyment in reading about Cody’s association with the malicious monsters.  Who knows, you may feel the same way I do!

The incredibly intense first chapter drew me immediately into the book and I consumed the whole thing, from start to finish, in less than 24 hours (which for me is really very quick).  That old cliche, I couldn’t put it down…?  Well, I couldn’t. Nor did I want to.  It was a delight to be back in the Major Incident Team alongside Cody, the formidable DCI Stella Blunt, the kind-hearted yet newly bolshy DC Webley. What an awesome team and yes, I may be a little bit in love with them all.

Called to the scene of a vicious murder in the grounds of a cathedral, the team are left stumped.  Their victim is a single middle aged woman, a teacher of religious studies at the local girls’ school with no skeletons in her closet, no one close enough to bear a grudge. They are left floundering.  Then a second body turns up, this one not so innocent but associated with the Catholic cathedral.  Could the link between these two victims be their beliefs?  Will Cody and the team discover who their twisted killer is before a third victim meets their maker…?

I absolutely loved it.  One of my favourite reads of the year.  It may be that the murders have a religious connotation, which has always appealed to me.  It may be the subtle humour Jackson writes into his character’s narrative or it may just be that it’s an absolutely stonking crime thriller series that I insist you check out.  As I approached the end of the book I had a fair idea of ‘whodunit’ but that didn’t take away from my enjoyment at all.  (I was right by the way.)

Would I recommend this book?  You have to ask?  Absolutely.  This one is definitely on the list of my top reads for 2017.  Cody and Megan have the most wonderful chemistry and I have high hopes for their future (I can hope, anyway!).  A stellar piece of crime fiction which I want all fans of the genre to read and enjoy.  It works perfectly well as a standalone but why bother when you can read the stunning A Tapping at My Door as well.  Brilliant work, well done Mr Jackson.

I chose to read and review an eARC of Hope to Die.  The above review is my own unbiased opinion.  My thanks to Imogen at Bonnier Zaffre for asking me to be a part of the blog tour.

Hope to Die by David Jackson was published in the UK by Zaffre on 21st September 2017 and is available in hardcover, paperback, eBook and audio formats | amazon.co.uk | amazon.com | Waterstones | Goodreads | 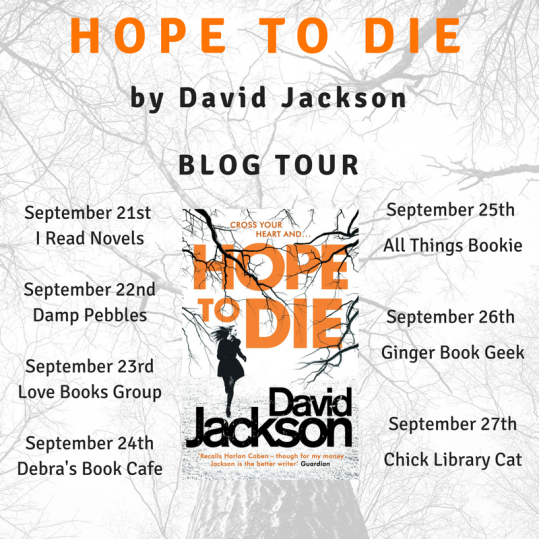 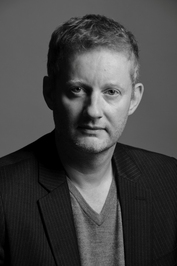 David Jackson is the author of a series of crime thrillers featuring New York Detective Callum Doyle. His debut novel, Pariah, was Highly Commended in the Crime Writers’ Association Debut Dagger Awards. When not writing fiction, David spends his time as a lecturer in a university science department. He also gives occasional workshops on creative writing. He lives on the Wirral peninsula with his wife and two daughters.