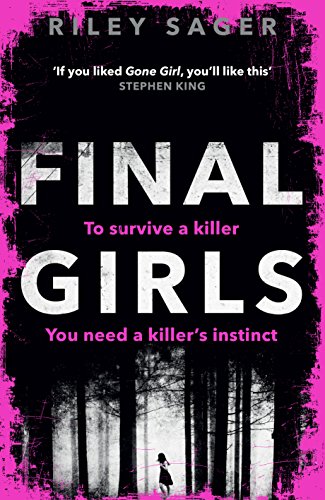 “FIRST THERE WERE THREE

The media calls them the Final Girls – Quincy, Sam, Lisa – the infamous group that no one wants to be part of. The sole survivors of three separate killing sprees, they are linked by their shared trauma.

THEN THERE WERE TWO

But when Lisa dies in mysterious circumstances and Sam shows up unannounced on her doorstep, Quincy must admit that she doesn’t really know anything about the other Final Girls. Can she trust them? Or…

CAN THERE ONLY EVER BE ONE?

All Quincy knows is one thing: she is next.”

I am feeling quite giddy today.  Giddy because it’s been a long time since a book has resonated with me quite like the mighty Final Girls did.  Having recently turned the last page I feel drained, I feel bereft, I feel strangely empowered, I want to shout from the rooftops exactly how much I enjoyed reading this incredible piece of fiction.  I think it’s fair to say I LOVED Final Girls by Riley Sager!

From the moment I saw that cover, read the blurb and read a couple of early reviews I knew this was going to be a new favourite read.  In a very egotistical way, it feels as though it was written just for me.  I say that because it’s everything I WANT in a book.  You know that age-old advice to wannabe authors?  They say write the book YOU would want to read?  Well, I’m afraid that won’t be happening for me because this is the book I want to read and it’s been written!  I actually feel envious of those that haven’t  read Final Girls yet – I would give almost anything to be able to read this book for the first time again!

Quincy Carpenter is a Final Girl.  Not by choice, no one chooses to be a Final Girl.  There are two other women who lay claim to the title, thanks to two separate massacres several years apart.  Quincy is the newest addition to the exclusive little group and the most reluctant to adopt the title.  She would rather forget everything that happened to her and her friends that fateful night in the woods.  She barely remembers what happened anyway thanks to selective memory loss, and that’s just fine by her!  When the original Final Girl, Lisa Milner, turns up dead in an apparent suicide bid, Quincy is stunned.  She cannot understand why Lisa would take her own life after everything she survived at her sorority house in Indiana.  She’s even more shocked when elusive, mysterious Samantha Boyd – the only other remaining Final Girl shows up at her apartment.  Having hidden from her family and, well, life for years now Quincy cannot understand why Samantha all of a sudden wants to get to know her.  Has Lisa’s suicide brought the two survivors together? Or is it something else completely….?

Where to start..?!  I’m normally a fan of the characters in a book but this time it was more about the situation, for me.  Ninety percent of the time I really liked Quincy, but she also irritated me with her refusal to accept or even acknowledge her past.  For this reason I despised her attorney boyfriend, Jefferson, and Quincy’s negligent mother for encouraging her to look to the future, not the past and suggesting she try her best to be ‘normal’.  Samantha was mysterious from the moment she arrived in the story and I couldn’t for the life of me work out what she was up to.

I absolutely loved the flashback sections where the reader is transported to that night in the woods ten years ago.  There is the most wonderful horror movie vibe about the events of that night which made me feel nervous and apprehensive, despite having a fair idea of what was going to happen.  The pressure mounts as Quincy begins to slowly recall her memories, filling in some pretty frightening gaps and realising what secrets she has kept since that blood filled night.  It’s fantastically written and so very well done.  I loved it!

Would I recommend this book?  Most definitely.  It’s a new favourite and one I will be driving everyone around me crazy with!  I’m so excited that this book exists – it’s perfect and I want everyone to read it so you can all see how awesome it is as well.  Brilliantly addictive, deliciously dark and everything I want in a book! Superb.

I chose to read an eARC of Final Girls.  The above review is my own unbiased opinion.

Final Girls by Riley Sager was published in the UK by Ebury Press on 13th July 2017 and is available in hardcover, eBook and audio formats (with the paperback to follow in January 2018) | amazon.co.uk | amazon.com | Waterstones | Goodreads |

Riley Sager is a pseudonym for an author who has been previously published under another name. A native of Pennsylvania, Riley is a writer, editor and graphic designer who now lives in Princeton, New Jersey.
​
Riley’s first novel, FINAL GIRLS (called “The first great thriller of 2017” by Stephen King), was published in 2017 in the United States, the United Kingdom and more than twenty countries around the world.