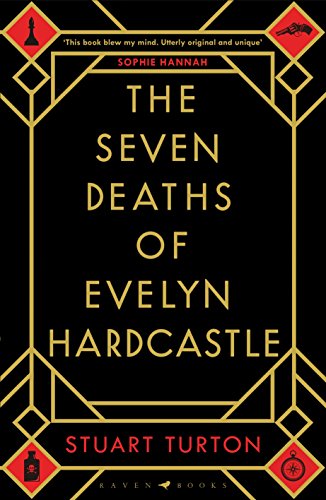 ‘Somebody’s going to be murdered at the ball tonight. It won’t appear to be a murder and so the murderer won’t be caught. Rectify that injustice and I’ll show you the way out.’

It is meant to be a celebration but it ends in tragedy. As fireworks explode overhead, Evelyn Hardcastle, the young and beautiful daughter of the house, is killed.

But Evelyn will not die just once. Until Aiden – one of the guests summoned to Blackheath for the party – can solve her murder, the day will repeat itself, over and over again. Every time ending with the fateful pistol shot.

The only way to break this cycle is to identify the killer. But each time the day begins again, Aiden wakes in the body of a different guest. And someone is determined to prevent him ever escaping Blackheath…

Well, it was a wonderful read and you should definitely purchase a copy. Thank you for your time, and goodnight!

Okay, maybe not the most extensive book review you may read today but that’s pretty much all you need to know; that’s my ‘take home’ message’ for Seven Deaths. It is utterly mesmerising as a novel and I do have to wonder exactly how Stuart Turton’s brain works. No, let’s not go there.

Aiden Bishop is in his own living hell. He’s trapped in Blackheath, a dilapidated manor house owned by the Hardcastle family. Every night he falls asleep and wakes the next day in a brand new body. Every day is exactly the same for Aiden; the day Evelyn Hardcastle is murdered at 11pm by the reflecting pool. He’s inhabiting ‘hosts’, strangers to him who have come to Blackheath for a rather macabre party. Aiden knows something isn’t quite right, he battles on a daily basis with his hosts. Their personalities sometimes pushing Bishop to the back, resulting in moments where he is not in control. Aiden is tasked by the Plague Doctor to solve the murder. He must report to the masked man at 11pm, tell him who killed Evelyn and he will finally be free. Will Aiden be able to solve the murder or will he be banished to a life of repetition. The same people, the same day, the same horrific murder, never able to remember who he is and, most importantly, what he’s left behind…

Honestly, I’m a little flummoxed about where to start. At no point whilst reading The Seven Deaths of Evelyn Hardcastle did I ever, truly, feel like I knew what was going on. This is an incredibly clever piece of fiction which I imagine took a significant amount of time to write. I think it was my friend Joanne at My Chestnut Reading Tree who I first saw compare this book to Quantum Leap. I just want to jump to my feet here and now nodding enthusiastically at you, giving you a look that says ‘YES! Flipping YES!’. This book reminded me so much of Quantum Leap. Quantum Leap plus Groundhog Day with a hefty dose of the classic murder mystery. Time hopping, body leaping and I’m going to have to say it again, OH.MY.GOSH, what a mystery! If you’re a fan of historical crime, if you’re a fan of the mystery novel then you must experience this book. It’s so different, so deliciously complex, so….well, GENIUS! And in a mere 500+ pages as well.

I am fully aware that this is a very different type of review from me today but that’s because The Seven Deaths is unlike anything I have read before. This is such a brilliant tale, so intricate and devilish that I have to recommend it highly. Not only do we have the very likeable Aiden Bishop leaping from day to day and body to body we also have the evil Footman, lurking around every corner ready to slash Aiden’s throat (or rather, his host’s throat) as soon as look at him. I loved the tension the Footman brought to the story; he was also the bringer of gore (and I do love a bit of gore in my books!) which made him a firm favourite in my eyes.

Would I recommend this book? I would. Oh flipping heck, the pressure you have placed upon yourself Mr Turton with that tricky second novel. I think many of your readers will be waiting with baited breath to see what you pull out of the hat next time. What a bar you have set. What an incredible debut. Bravo!

Stuart Turton will be appearing at the April First Monday Crime on Monday 9th March 2018. Stuart will be appearing alongside John Connolly, Rachel Abbott, Leigh Russell and moderator Barry Forshaw, one of the UK’s leading experts on crime fiction and film. The event is FREE of charge and will be held at 6.30pm on Monday 9th April at City University, College Building, A130. Click HERE to book your FREE ticket or hop over to the First Monday Crime website for more information.

My thanks to Beth over at the fantastic Bibliobeth. My copy of The Seven Deaths of Evelyn Hardcastle was part of the prize package I won to celebrate her fifth blogiversary. If you haven’t done so already then please check Beth’s blog out – I love it!

The Seven Deaths of Evelyn Hardcastle was published in the UK by Raven Books | Bloomsbury Books on 8th February 2018 and is available in hardcover, eBook and audio formats | amazon.co.uk | amazon.com | Waterstones | Goodreads | 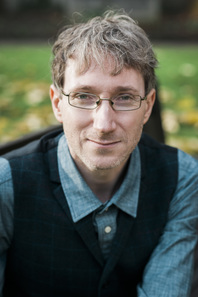 Stuart is the author of a high-concept crime novel and lives in London with his amazing wife, and drinks lots of tea.

When he left university he went travelling for three months and stayed away for five years. Every time his parents asked when he’d be back he told them next week, and meant it.

Stuart is not to be trusted. In the nicest possible way.

He’s got a degree in English and Philosophy, which makes him excellent at arguing and terrible at choosing degrees. Having trained for no particular career, he has dabbled in most of them. He stocked shelves in a Darwin bookshop, taught English in Shanghai, worked for a technology magazine in London, wrote travel articles in Dubai, and now he’s a freelance journalist. None of this was planned, he just kept getting lost on his way to other places.

He likes a chat. He likes books. He likes people who write books and people who read books. He doesn’t know how to write a biography, so should probably stop before we start talking about his dreams or something. It was lovely to meet you, though.