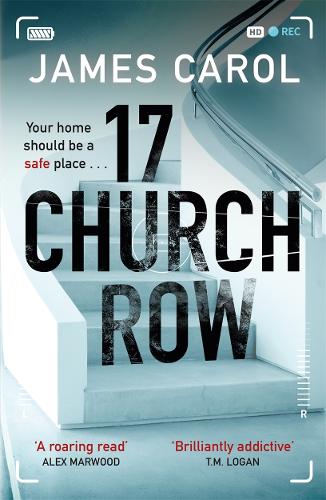 “Three years ago, Nikki and Ethan Rhodes suffered a devastating loss when their four-year-old daughter Grace was tragically killed in a road accident. Ethan, a radio personality, escapes into work, leaving Nikki to care for their remaining child, Bella, who hasn’t spoken since that day.

Seeking a fresh start, the family moves into a revolutionary new house designed by renowned architect, Catriona Fisher. The house features a state-of-the-art security system, along with every amenity you could dream of.

For the Rhodes’ this is a chance to finally pick up the pieces and get on with their lives in a place where they feel totally safe.

But what if 17 Church Row isn’t the safe haven that they think it is?”

I am delighted to welcome you to damppebbles today and to my stop (one of the first two stops!) on the 17 Church Row blog tour. 17 Church Row is the latest release from the brilliant James Carol and it will be published in paperback later this week. I received a free eARC of 17 Church Row but that has in no way influenced my review.

I am a huge fan of James Carol’s writing. If Mr Carol writes it, you can guarantee I’ll be reading it as soon as humanly possible. His Jefferson Winter series is absolutely sublime and his standalone novels (of which 17 Church Row is one) are all thrilling, captivating reads. If you’ve never picked up a James Carol novel then you’re really, REALLY missing out.

Nikki Rhodes took her eyes off her twin daughters for only a split second, and that was all it took for tragedy to strike. Nikki knows their lives have changed forever when she hears the screeching of tyres and sees the front door swinging wide open. Learning to rebuild their lives after the loss of Grace is the toughest thing they’ve had to face, but particularly for Bella – Grace’s twin sister – who hasn’t spoken since the accident. When Ethan suggests they move house, leaving behind the painful memories, Nikki doesn’t know what to do for the best. But radio DJ, Ethan has found the perfect house for them – 17 Church Row in Kensington. It’s the house of the future and architect, Catriona is looking to build many, many more. Having a media star like Ethan Rhodes move into her project is a gold mine. You just can’t buy that kind of publicity! 17 Church Row is a futuristic abode decked out with the latest in AI technology. The house is run by ‘Alice’ who can answer to your every whim and is always one step ahead of you. The pain of losing Grace will be with the family forever. Bella is their number one priority now and they have to do everything they can to make her life as happy and as fulfilled as possible. And there’s always the chance that this change of scene could be the catalyst to get Bella to talk again. But what if their new safe haven isn’t as safe and secure as they believe…?

If memory serves I’ve said this before: Woah! If this is the future then I’m locking myself in a library and NEVER, EVER leaving! The last time I said that it was about self-driving cars. I think it’s fair to say I feel the same about self-driving houses! Oh.My.Goodness. This futuristic thriller is one scary read and I’m quite happy in my very normal, very non-AI house – thank you very much! If you had presented 17 Church Row to be me before I read this book I would have bitten your hand off. Modern, sleek, visually stunning. Carol paints a beautiful aesthetic with his words. But I’ve read the book. You can keep your all-singing, all-dancing house!

This is an entertaining thriller and with some interesting characters. I really felt for Nikki who was punishing herself on a daily basis over her daughter’s death. To want to escape the memories but at the same time not feel able to leave them behind, what a tough decision to make. And poor little Bella broke my heart on a number of occasions. I did feel one of the characters was only part of the story to move the plot along – a bit like being a red jerseyed ensign about to embark on your first mission with Captain James T. Kirk to an alien planet. You’ve had a few lines, played a small part and now we all know you’re going to get in in the neck! It wasn’t a huge surprise for me when something questionable happened to them. The architect, Catriona, is also super creepy…yuck!

Would I recommend this book? I would, yes. I would recommend all of James Carol’s books as they are all brilliant. If you’re in the mood for something a little bit different then this is the book for you. It’s quite terrifying to think this is how we could be living in the future. Quite an eye-opener. And yes, my Alexa is now in the bin….

I chose to read and review an eARC of 17 Church Row. The above review is my own unbiased opinion.

17 Church Row by James Carol was published in the UK by Zaffre Books on 14th November and is available in paperback, audio and ebook formats (please note, some of the following links are affiliate links which mean I receive a small percentage of the purchase price at no extra cost to you): | amazon.co.uk | Waterstones | Foyles | Book Depository | Goodreads | 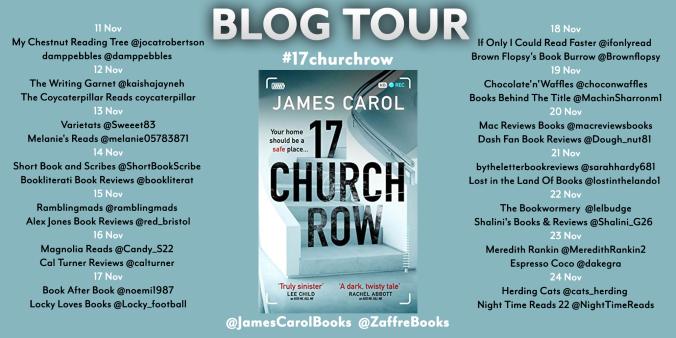 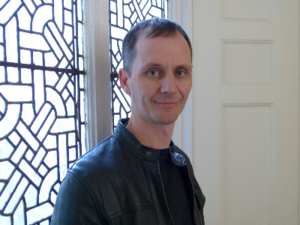 James Carol was born in Scotland, where he spent his early years. He moved to England in the eighties and has lived there ever since. At various times he has worked as a guitarist, sound engineer, guitar tutor, journalist, and a horse riding instructor.

James has also written three standalone thrillers. The first of these, The Killing Game was shortlisted for a CWA Ian Fleming Dagger award.

When he’s not writing, James can usually be found in his recording studio where he is currently writing and recording the first Dream Nation album.

James lives in Hertfordshire with his wife, two children, a dog and a horse.