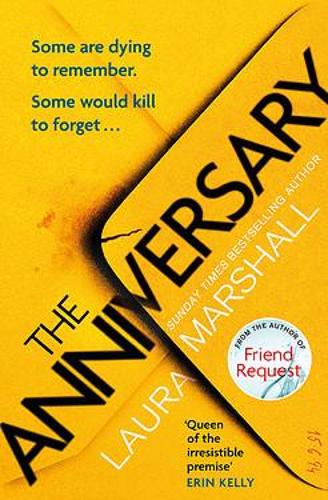 “They thought the killer had no motive. But these murders are not what they seem . . .

On 15th June 1994, Travis Green – husband, father, upstanding citizen – walked through the streets of Hartstead and killed eleven of his neighbours. The last victim was little Cassie Colman’s father.

As the twenty-five-year anniversary approaches, Cassie tries to forget the past – even as her mother struggles to remember it at all. Then something hidden in her mother’s possessions suggests the murders were not what everyone believes.

Cassie can’t stop herself from digging up the past. But someone will do anything to keep it buried . . .”

Hello and welcome to damppebbles. Today I am delighted to share my review of The Anniversary by Laura Marshall. The Anniversary was published by Sphere Books on 3rd March 2022 in paperback format and is also available in hardcover, audio and digital formats.

I couldn’t resist this book. With its striking yellow cover and intriguing blurb, it was a book I felt I had to read so downloaded a copy at the first available opportunity. And I’m so glad I did because it’s an absolute corker of a read!

Cassie Colman has reluctantly returned to Hartstead, the town she grew up in, to look after her mother who has been diagnosed with early onset dementia. Hartstead is the last place she wants to be because nearly 25 years ago on 15th June a man named Travis Green walked the streets of the small town shooting and killing its residents, eleven in total. The last victim was Cassie’s father, gunned down in his own home in front of his wife and daughter. Cassie was only four-years-old at the time. She has no memory of what happened that day but she has plenty of questions, none of which her mother is able to answer. So when a journalist approaches her wanting to write a piece on the impact of mass trauma on a small town, Cassie sees it as the perfect opportunity to find out what happened that fateful June day. But not everyone is as keen to remember and many will do anything to forget…

Woah, The Anniversary was so good! I *ahem* neglected to re-read the blurb before diving into this one so had no idea what the ‘anniversary’ the story is based around actually was (brain like a sieve!). What I wasn’t expecting was a mass shooting. So that made me immediately sit up and reassess, let me tell you! The author has created such an eminently readable novel, such a compulsive and enthralling page turner that I devoured all 384 pages in under 24 hours (which I think is a record for me!). Life in general was put on hold whilst I immersed myself in Cassie’s quest for the truth.

I thought the way the author has written Cassie’s struggle to balance life as a new mum with a tiny baby alongside caring for her own mother was authentic and heartfelt. Her loneliness at times was clear, along with her distress at being the responsible adult in the house and having to do everything. That coupled with her ‘fame’ as Gary Colman’s daughter and the approaching anniversary really add to the weight pressing down on her shoulders. I liked Cassie a lot. The author has created a very human, very relatable character.

I thoroughly enjoyed the flashbacks to 15th June 1994 where we see what is happening from the eleven victims’ point of view. Are the attacks completely random or do these people have something in common to connect them? As the story progresses the reader is able to draw some conclusions but not everything adds up which really ramps up the intrigue and keeps you turning those pages into the wee small hours.

Would I recommend this book? I would, yes. The Anniversary is an absolutely cracking read. I loved the twists and turns, I loved the pace of the book, I loved the premise SO MUCH! The characters were interesting and I was rooting for Cassie from the get-go. This is the first book I’ve read by this author but it won’t be the last as I’m planning on downloading her first two books as soon as possible (and the new one when it’s published later this year!). Hugely compelling and near impossible to put down, this is one of the best psychological thrillers I’ve read in a while. Loved it! Highly recommended.

The Anniversary by Laura Marshall was published in the UK by Sphere Books on 3rd March 2022 and is available in hardcover, paperback, audio and digital formats (please note, the following links are affiliate links which means I receive a small percentage of the purchase price at no extra cost to you): | amazon.co.uk | Waterstones | Foyles | Book Depository | bookshop.org | Goodreads | damppebbles bookshop.org shop | 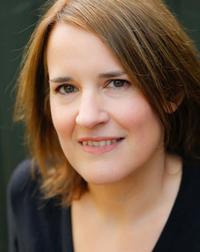 Laura Marshall is the bestselling author of three psychological thrillers. Her debut novel, Friend Request, was a Kindle No.1 and Sunday Times bestseller, with over half a million copies sold in the UK. Laura’s books have sold in twenty-four territories around the globe.

She grew up in Wiltshire, studied English at the University of Sussex and currently lives in Kent with her family.