18 months after the ‘Ragdoll’ murders, a body is found hanging from Brooklyn Bridge, the word ‘BAIT’ carved into the chest.

In London a copycat killer strikes, branded with the word ‘PUPPET’, forcing DCI Emily Baxter into an uneasy partnership with the detectives on the case, Special Agents Rouche and Curtis.

Each time they trace a suspect, the killer is one step ahead. With the body count rising on both sides of the Atlantic, can they learn to trust each other and identify who is holding the strings before it is too late?”

A couple of months ago I had the pleasure of reading and reviewing Daniel Cole’s debut crime thriller, Ragdoll. I thoroughly enjoyed it, particularly the inventive ways Cole came up with to kill off a number of the characters. It’s no secret that I like my crime thrillers edging on horror with lots of bodies and lots of blood, so Ragdoll held a lot of appeal for me. The second book in the Ragdoll series, Hangman immediately became a must-read. I just had to see what the author was going to do with his characters next…

And the answer is, he completely ignored his lead protagonist and focussed solely on a supporting member of his cast. Not what you would expect, right? I’ve seen Hangman mentioned in places as Detective Fawkes #2. It really isn’t though. Fawkes hardly features in this novel and I absolutely flipping LOVED it! My one bugbear with Ragdoll was that I felt very little for either Fawkes or his sidekick, Emily Baxter. If anything, Baxter irritated me with her fawning over Fawkes and her (ugh) neediness. Having read Hangman from cover to cover I have completely changed my mind about her. I love the new ‘slightly more damaged than she was before’ Emily Baxter. Her sarcastic manner, her bossiness, her ‘don’t actually give a damn!’ attitude and her secretiveness. I really like this new Baxter and hope she doesn’t change back to her old, puppy dog ways in book three when Fawkes *may* return.

Baxter isn’t the only character I loved in Hangman. I’ve already mentioned that Fawkes isn’t really present. However, Baxter is instructed to work alongside the FBI and CIA as her current investigation spans continents and has links to the famous Ragdoll case she ‘heroically’ solved. Curtis (the FBI agent) and in particular Rouche (the CIA operative) really brought something to the story. We get to see Baxter’s newfound barriers crumble a little as she warms to Rouche. I’m not sure there is any point in the story where she trusts him but I really enjoyed the relationship between the two.

I have to say, I found the story a little far-fetched in some places but in all honesty, I didn’t actually give a hoot as I was utterly captivated by the characters and what was going to happen next. Daniel Cole had my full attention from start to finish and to me, that is more important than a little artistic licence. I also loved the humour Cole has written into the pages of Hangman. This is the first book in a long time that I found myself quietly chuckling along to.

Would I recommend this book? Totally. I loved it. I preferred it to Ragdoll. I loved seeing things from Baxter’s perspective and I hope the *possible* return of Fawkes in book three doesn’t reduce her character to what it was in book one. I would be devastated. So utterly gripping I couldn’t put this book down. I described the need to keep turning the pages of Ragdoll as similar to catnip. Well, the author has done it again but this is super strength catnip! A perfect read for me.

I chose to read and review an eARC of Hangman. The above review is my own unbiased opinion.

Hangman by Daniel Cole was published in the UK by Trapeze Books on 22nd March 2018 and is available hardcover, eBook and audio formats (please note, the following Amazon and Waterstones links are affiliate links): | amazon.co.uk | amazon.com | Waterstones | Goodreads | 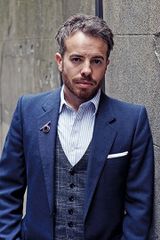 Daniel Cole has worked as a paramedic, an RSPCA officer, and most recently for the Royal National Lifeboat Institution. Ragdoll is his first novel. He lives in Bournemouth, England. 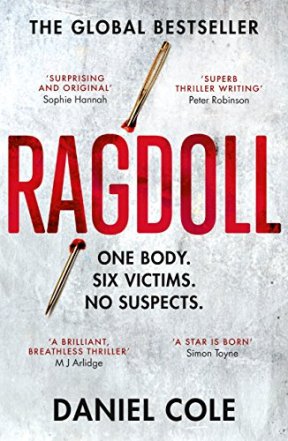 “A body is discovered with the dismembered parts of six victims stitched together, nicknamed by the press as the ‘Ragdoll’.

Assigned to the shocking case are Detective William ‘Wolf’ Fawkes, recently reinstated to the London Met, and his former partner Detective Emily Baxter.

The ‘Ragdoll Killer’ taunts the police by releasing a list of names to the media, and the dates on which he intends to murder them.

With six people to save, can Fawkes & Baxter catch a killer when the world is watching their every move?”

Ragdoll by Daniel Cole is a book which has been sat on my bookshelf for some time now giving me the eye.  I have been desperate to read this intriguing tale for such a long time, and I have finally managed to do so!  Let’s face it, regular readers of the blog will know that I like my crime fiction with lots of bodies and blood.  In fact, the gorier, the better.  So on hearing that the killer creates a ragdoll made of severed limbs and various other body parts….well, there was no way I could pass this one by!

Detective William ‘Wolf’ Fawkes is a rather notorious figure in the MET.  His career hit an all-time low during the trial of London’s most feared serial killer, The Cremation Killer.  After taking several years to himself Wolf is back in the midst of the action and facing down a new killer.  Except this one has provided a list of the intended victims and the dates they will die, alongside a macabre ragdoll which, coincidentally, points with a long-dead finger to Wolf’s newly leased apartment.  Wolf and his former partner, Detective Emily Baxter are on the case but will they be able to save the victims before it’s too late…?

I really wanted to like both Wolf and Emily Baxter but I’m afraid neither managed to provoke much of a reaction in me, I neither liked them or loathed them.  Out of the two characters, Emily Baxter was the harder to like as she came across as quite needy at times and her desire to be more than colleagues with Wolf was quite stomach churning.  But that’s me, I would happily go without a romantic interest in the books I read for, well, all eternity if I could.  Fawning over a bloke, particularly a bloke like Wolf, made her feel quite cringe-worthy to me.  This may be due to Ragdoll being the first book in the series.  There have been several occasions before where I haven’t like the lead characters in book one, only to warm to them as the series progresses.  I’m excited to see what Cole is planning next, and the good news is we don’t have to wait long.  Hangman, the second Ragdoll book, will be published in March 2018!

What I absolutely loved and what I have to commend the author on, is the fabulously inventive and original ways in which he killed off a number of the characters.  Reading this book and discovering how the next murder was carried out was like catnip to me.  I had to carry on reading, I became quite feverous wanting to know what ingenious way the killer was going to strike next.  Absolutely blinking brilliant from start to finish and I couldn’t stop reading.  I also enjoyed how Cole linked the past and the present, making sure Wolf was fully aware that he was involved in this process, whether he liked it or not!

Would I recommend this book?  Yes, I would.  This is a must read if you’re a fan of grisly crime fiction (a bit like me really!).  I can’t wait to see where Cole will take his characters next, particularly with that chilling last line of Ragdoll.  Incredibly compelling, highly inventive and full of surprises.  I very much enjoyed Ragdoll.

Ragdoll by Daniel Cole was published in the UK by Trapeze Books on 19th October 2017 and is available in hardcover, paperback, eBook and audio formats (the following Amazon links are affiliate links)
| amazon.co.uk

Daniel Cole has worked as a paramedic, an RSPCA officer, and most recently for the Royal National Lifeboat Institution. Ragdoll is his first novel. He lives in Bournemouth, England.