“Scream meets Gossip Girl with a dash of One of Us is Lying!

When it comes to horror movies, the rules are clear:
– Avoid abandoned buildings, warehouses, and cabins at all times.
– Stay together: don’t split up, not even just to “check something out.…
– If there’s a murderer on the loose, do NOT make out with anyone …

New girl Rachel Chavez turns to horror movies for comfort, preferring them to the bored rich kids of her fancy New York High School. But then Rachel is recruited by the Mary Shelley Club, a mysterious student club that sets up terrifying Fear Tests; elaborate pranks inspired by urban legends and horror movies.

But when a sinister masked figure appears, Rachel realises that her past has caught up with her. It’s time for the ultimate prank to play out …”

Hello and welcome to damppebbles. Today I am delighted to be sharing my review of The Last Girl by Goldy Moldavsky. The Last Girl was published by Electric Monkey yesterday (that’s Thursday 15th April 2021) and is available in paperback and digital formats. I chose to read and review a free eARC of The Last Girl but that has in no way influenced my review.

Everything about this book called to me. I’m a huge fan of the Final Girl trope and like to dabble in the odd spot of horror fiction every now and again (OK, it’s fairly often!). So as soon as I saw that fabulous blood splattered, yellow cover and read the blurb, I knew I had to read The Last Girl. Yes, I may be a smidge out of the books YA age range but so flippin’ what! I thoroughly enjoyed this entertaining homage to horror movies.

Rachel Chavez has a secret. Something terrifying happened to her and she lives with the trauma and the memories every day. Turning to horror movies for comfort she struggles to come to terms with what she did that fateful night one year ago. Following a move from Long Island to an exclusive private school in Manhattan, Rachel struggles to adjust to her new surroundings. There’s no denying it, she’s the new girl at school and just doesn’t fit in. She is neither privileged nor popular and only there because her mother is on the staff. But she finds a friend in Saundra who is determined to help her get to know a few people and drags Rachel unwittingly along to every party going. At one such party Rachel sees something she perhaps shouldn’t and is introduced to The Mary Shelley Club: a group of ill-fitting teens who like to watch horror movies and test whether the horror tropes they love so much can actually play out in real life by staging dramatic and terrifying pranks they like to call Fear Tests. But it soon becomes clear that Rachel can’t run from her past….

If you’re a horror movie fan this is a must read! You will love the references and the discussions which take place between the characters. I’ve seen the grand total of zero horror movies [I kid you not! I was present once in the room when Scream played out on the TV – there was another teen slasher about Valentine’s Day too but I can’t remember what that was called!] and I absolutely devoured it. I may not have seen the movies but I’m familiar with many of the characters and what happens in the more popular films. For the more obscure references Google was my friend!

The Last Girl is a terrific book. It didn’t take me long to warm to Rachel who I thought, despite what she had gone through (and her rather intense horror movie obsession), was a pretty normal, likeable kid. The other characters in the book are all very well drawn, particularly the members of the Mary Shelley Club – Felicity, Freddie, Bram & Thayer – who all had their own strong, identifiable personalities and idiosyncrasies. Some of the kids were popular, others weren’t. Some were at the school as part of a scholarship, others were there because Mummy and Daddy were part of the New York elite. Despite being quite tightknit during meetings, outside they pretended not to know each other and I really liked that. It added to the whole mystical exclusive club vibe the author does so well. The themes of ‘fitting in’ and feeling the need to belong run strong through this novel. As someone who perhaps didn’t always fit, I felt I could relate to Rachel’s awkwardness at times.

However, I have to say as a responsible, *ahem* mature adult, the idea of the Mary Shelley Club is a terrible one (bloody marvellous as a piece of fiction – truly terrible in real life). But I couldn’t help but enjoy every moment of it which probably makes me an awful human being! I loved seeing how the club re-enacted the popular tropes. The effort they put in to their ‘pranks’ was true dedication to the cause.  I’m a keen amateur sleuth – regular readers of damppebbles may already know this – but this is the first book in a while where I’ve not set out to find out ‘whodunit’. I just went with the flow of the story without trying to second guess what was going to happen next and why. And I loved where this novel took me. Whilst the big reveal didn’t come as a huge surprise there were aspects of it which I found quite shocking. I don’t think I’m quite over it yet!

Would I recommend this book? I would, yes. The Last Girl was a thoroughly entertaining read. I was expecting a full-on teen slasher but what I got was a clever mystery laden with great horror movie references featuring a group of teens I actually started to care about, despite their obsession with fear and their insatiable need to terrorise people. A well-written page turner. A story that stuck its meat hooks into me from early on and kept me riveted from start to finish. I would happily read more from this author and will be on the look out for future releases. Recommended

I chose to read and review a free eARC of The Last Girl. The above review is my own unbiased opinion.

The Last Girl (aka as The Mary Shelley Club) by Goldy Moldavsky was published in the UK by Electric Monkey on 15th April 2021 and is available in paperback and digital formats (please note, the following links are affiliate links which means I receive a small percentage of the purchase price at no extra cost to you): | amazon.co.uk | Waterstones | Foyles | Book Depository | bookshop.org | Goodreads | the damppebbles bookshop.org shop | 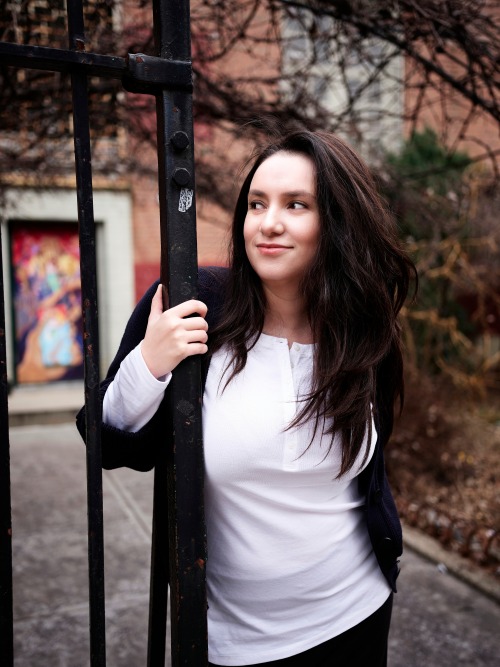 Goldy Moldavsky was born in Lima, Peru, and grew up in Brooklyn, where she still lives. Her novels include the New York Times bestseller, KILL THE BOY BAND, NO GOOD DEED, and the upcoming THE MARY SHELLEY CLUB (Henry Holt Books, 2021); her love of 80s movies, 90s boy bands, and horror flicks hugely influences her work. She can be found on Twitter and Instagram @goldywrites.