“Inspector McLean returns in the seventh instalment of James Oswald’s gritty, compelling crime series, for his most mysterious murder investigation yet . . .

When a body is found in a tree in The Meadows, Edinburgh’s scenic parkland, the forensics suggest the corpse has fallen from a great height.

Detective Inspector Tony McLean wonders whether it was an accident, or a murder designed to send a chilling message?

The dead man had led quite a life: a disgraced ex-cop turned criminal kingpin who reinvented himself as a celebrated philanthropist.

As McLean traces the victim’s journey, it takes him back to Edinburgh’s past, and through its underworld – crossing paths with some of its most dangerous and most vulnerable people.

And waiting at the end of it all, is the truth behind a crime that cuts to the very heart of the city…”

Hello and welcome to damppebbles. Today I am delighted to be sharing my third 20 Books of Summer review with you, which is for Written in Bones by James Oswald. Written in Bones was published by Penguin Books on 29th June 2017 and is available in all formats. I chose to read and review an eARC of Written in Bones but that has in no way influenced my review.

Oh the perils of NetGalley. Imagine the scene. Wherever you look, crime fiction readers are raving about an author and your FOMO seriously kicks in. Everywhere I looked on social media, the name James Oswald was being mentioned. The need to read a book by Oswald went from being ‘vaguely intrigued’ to ‘epically strong’, so I toddled off to NG and requested Written in Bones. Only to discover that it’s the seventh book in the DI Tony McLean series 🤦. Book seven. Now, I don’t mind going into a series partway through, but knowing I had missed out on six earlier books had me worried. I thoroughly enjoyed the time I spent with DI McLean and team, but I did feel a little lost at times. If you’re coming to this series for the first time, then I would strongly suggest that you start at the beginning as I felt I struggled a little not knowing the history of these characters.

McLean is called to a crime scene in The Meadows and what he finds is like nothing he’s seen before. An ex-police officer with a notorious past is found dead in a tree. By the looks of things, Bill Chalmers was dropped from a great height. The 10-year-old boy who discovered the body tells of hearing a dragon whilst out walking his dog. But surely that can’t be the case, can it…? McLean is at a loss. Taking a microscope to Chalmers’ colourful life, they struggle to find why anyone would want him dead and in such an elaborate fashion to boot! Staff shortages, the sudden retreat of many of the senior officers and an eye witness account of a mythical beast, all muddy the waters. How far does McLean have to dig into the past to discover what really happened to Bill Chalmers and more importantly, why…?

I really liked DI Tony McLean. I read a lot of crime fiction, particularly police procedurals, and I enjoy it when an author gives their lead detective a different spin. McLean’s wealth and his determination to get the job done at any cost made him a memorable character. He doesn’t need to keep the bosses onside, and does whatever it takes and upsets whoever he needs to, to get the job done. I can see why this is such a popular series and why Oswald is a much-admired writer. I absolutely loved the cold, snowy setting of Edinburgh and could easily picture the scene as McLean drove through the streets in his vintage Alfa. I liked the way the treacherous weather hampered the investigation. It was almost a character in itself!

I found the plot a little confusing but I think that’s because there are quite a few key characters at play and I was meeting them for the first time. Had I had some experience or knowledge of the cast, then perhaps I would have been able to get to grips with the plot a little quicker. Rather than having to refer to my notes a lot of the time to remind myself who was who and what I knew about them up until that point.

Would I recommend this book? Sort of. I would recommend that you start at the beginning of the series with Natural Causes and work your way up to Written in Bones. There’s a lot of pressure on authors to make sure each of their books ‘stand alone’ but I feel there’s been too much water under the bridge for that to be the case with this book. I came into Written in Bones expecting to not fully understand all of the references to previous cases and to not be familiar with the characters. That’s what you get when you start a series partway through. But I felt I had been left out of the cool group at school, a little on the periphery and watching the action from afar. Not really understanding exactly what was going on. I loved Oswald’s writing, his characters and his bitterly cold Edinburgh, and would happily (gladly!) read more. Just in the right order this time.

I chose to read and review an eARC of Written in Bones. The above review is my own unbiased opinion.

Written in Bones by James Oswald was published in the UK by Penguin Books on 29th June 2017 and is available in hardcover, paperback, audio and digital formats (please note, the following links are affiliate links which means I receive a small percentage of the purchase price at no extra cost to you): | amazon.co.uk | Waterstones | Foyles | Book Depository | Goodreads | 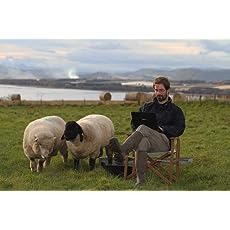 James Oswald is the author of the Sunday Times bestselling Inspector McLean series of detective mysteries. The first two of these, Natural Causes and The Book of Souls were both short-listed for the prestigious CWA Debut Dagger Award. Set in an Edinburgh not so different to the one we all know, Detective Inspector Tony McLean is the unlucky policeman who can see beneath the surface of ordinary criminal life to the dark, menacing evil that lurks beneath.

He has also introduced the world to Detective Constable Constance ‘Con’ Fairchild, whose first outing was in the acclaimed No Time To Cry.

As J D Oswald, James has also written a classic fantasy series, The Ballad of Sir Benfro. Inspired by the language and folklore of Wales, it follows the adventures of a young dragon, Sir Benfro, in a land where his kind have been hunted near to extinction by men. The whole series is now available in print, ebook and audio formats.

James has pursued a varied career – from Wine Merchant to International Carriage Driving Course Builder via Call Centre Operative and professional Sheep Shit Sampler (true). He moved out of the caravan when Storm Gertrude blew the Dutch barn down on top of it, and now lives in a proper house with three dogs, two cats and a long-suffering partner. He farms Highland cows and Romney sheep by day, writes disturbing fiction by night.