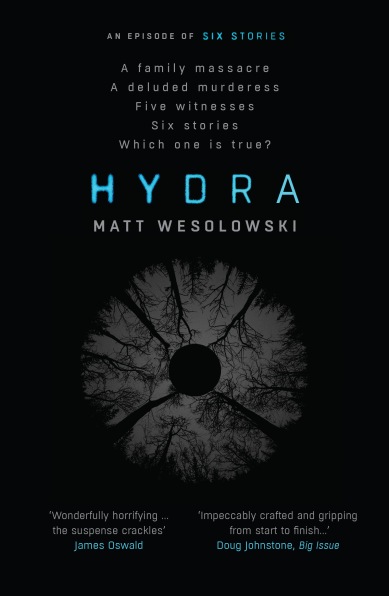 “One cold November night in 2014, in a small town in the northwest of England, 21-year-old Arla Macleod bludgeoned her mother, stepfather and younger sister to death with a hammer, in an unprovoked attack known as the Macleod Massacre. Now incarcerated at a medium-security mental-health institution, Arla will speak to no one but Scott King, an investigative journalist, whose Six Stories podcasts have become an internet sensation.

King finds himself immersed in an increasingly complex case, interviewing five key witnesses and Arla herself, as he questions whether Arla’s responsibility for the massacre was as diminished as her legal team made out. As he unpicks the stories, he finds himself thrust into a world of deadly forbidden ‘games’, online trolls, and the mysterious black-eyed kids, whose presence seems to extend far beyond the delusions of a murderess… Dark, chilling and gripping, Hydra is both a classic murder mystery and an up-to-the-minute, startling thriller that shines light in places you may never, ever want to see again.”

It is my pleasure to welcome you to my stop on the Hydra blog tour which I share with one of my very favourite bookish people, the incredible Liz over at Liz Loves Books.  If you haven’t discovered Liz’s blog yet then you must!  Hydra is the second book from the pen of author Matt Wesolowski to be published by Orenda Books.  Wesolowski’s Orenda debut, Six Stories, absolutely blew my mind last year and took it’s place proudly on my top ten (*mumble, mumble* may have been twelve) books of the year.  If you need a reminder, or if you missed my review the first time then please click HERE.  I think it’s fair to say I LOVED Six Stories.

So I was strangely apprehensive (and of course, excited!) starting Hydra.  I knew before turning the first page that the story was in a similar vein to Six Stories.  If you haven’t experienced the incredible Six Stories (you really should get yourself a copy) then let me explain.  Six Stories is a series of podcasts hosted by Scott King.  King rakes over cold cases – not to necessarily solve the mystery but to encourage new discussion and debate.  King provides his listeners with the details of a particular case but from six different standpoints.  Six different viewpoints all bringing that little bit of extra information to the front, fleshing it out for his listeners.

The focus of King’s latest investigation is the Macleod Massacre of 2014.  If there’s one way for a book to get its hook into me then that is to mention a blood-soaked spree.  I know, I’m strange.  But I’ve never shied away from the fact that I like blood, guts and gore in my books.  The reader gets so much more than that though (and it really isn’t all that gory, I promise).  This is not a book about solving a murder case – we know ‘whodunnit’ and it was Arla Macleod – it’s all about the WHY.  Why did Arla kill her family that day?  Why did she change so dramatically?  What was the cause?  And if like me, you don’t see the incredibly clever twist coming then I can guarantee it will be a revelation.  Wow!

If there is one thing Wesolowski excels at, it’s giving his reader chills.  Hydra, like its predecessor, did an excellent job of making me feel nervous and apprehensive.  The author is a master at creating a scene and dropping you slap, bang right in the action.  You live the moment with the characters which for me added extra eerieness and I was completely absorbed in the moment.  Nothing else mattered.  Incredibly atmospheric, perfectly eerie, I absolutely loved Hydra.

Would I recommend this book?  Absolutely, without a doubt.  Wesolowski is one of my very favourite authors.  He writes in a totally different, exciting and original way and I love to read his books.  I will say this though, Hydra is absolutely brilliant but I did prefer Six Stories.  There are many reviewers out there saying that this book is Wesolowski’s best yet, but I have to disagree.  It’s still better than MANY other books I have read in the past 12 months but Six Stories will always have a special place in my heart.  In fact, if you’re picking up a copy of Hydra then add a copy of Six Stories whilst you’re at it.  You won’t regret it.

An easy five out of five stars.

I chose to read and review an ARC of Hydra.  The above review is my own unbiased opinion.

Hydra by Matt Wesolowski was published in the UK by Orenda Books on 15th January 2018 and is available in paperback and eBook formats | amazon.co.uk | amazon.com | Waterstones | Goodreads | 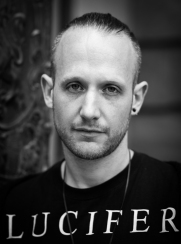 Matt Wesolowski is from Newcastle-Upon-Tyne in the UK. He is an English tutor for young people in care. Matt started his writing career in horror, and his short horror fiction has been published in numerous UK- and US-based anthologies such as Midnight Movie Creature Feature, Selfies from the End of the World, Cold Iron and many more. His novella, The Black Land, a horror set on the Northumberland coast, was published in 2013. Matt was a winner of the Pitch Perfect competition at Bloody Scotland Crime Writing Festival in 2015. His debut thriller, Six Stories, was an Amazon bestseller in the USA, Canada, the UK and Australia, and a WHSmith Fresh Talent pick, and film rights were sold to a major Hollywood studio.