“Married couple Jack and Ali Gardiner move to a self-sufficient commune in the English Fens, desperate for fresh start. The local village is known for the witches who once resided there and Rosalind House, where the commune has been established, is a former psychiatric home, with a disturbing history

When Jack and Ali arrive, a chain of unexpected and unexplained events is set off, and it becomes clear that they are not all that they seem. As the residents become twitchy, and the villagers suspicious, events from the past come back to haunt them, and someone is seeking retribution…

At once an unnerving locked-room mystery, a chilling thriller and a dark and superbly wrought ghost story, The Lingering is an exceptionally plotted, terrifying and tantalisingly twisted novel by one of the most exciting authors in the genre.”

I am delighted to welcome you to the blog today and to my stop on The Lingering blog tour.  The Lingering is the latest book from SJI Holliday and was published by Orenda Books on 15th November 2018.

To celebrate The Lingering’s release I have a paperback copy up for grabs today.  To be in with a chance of winning a copy all you have to do is pop the name of your favourite spooky book in the comments.  We’ve missed Halloween but that doesn’t matter. Ghost stories work no matter what time of year!

The giveway is open internationally and the winner will be announced shortly after midday on Sunday 25th November (GMT) when the giveaway closes.  The winner will need to provide me with their name and address which I will pass on to the blog tour organiser.  There is no cash alternative.  Good luck everyone!

The Lingering by SJI Holliday was published in the UK by Orenda Books on 15th November 2018 and is available in paperback, eBook and audio formats (please note, some of the following links are affiliate links which means I receive a small percentage of the purchase price at no extra cost to you): | amazon.co.uk | amazon.com | Waterstones | BookDepository | Goodreads | 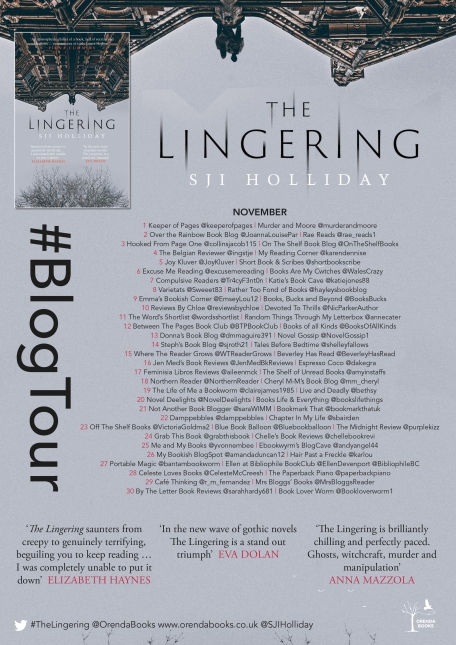 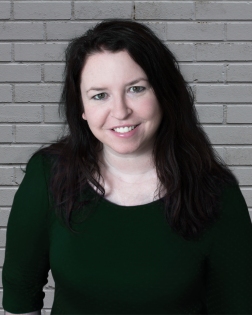 S.J.I. (Susi) Holliday is a pharmaceutical statistician by day and a crime and horror fan by night. Her short stories have been published in many places and she was shortlisted for the inaugural CWA Margery Allingham prize with her story ‘Home from Home’, which was published in Ellery Queen Mystery Magazine in spring 2017. She is the bestselling author of the creepy and claustrophobic Banktoun trilogy (Black Wood, Willow Walk and
The Damselfly) featuring the much-loved Sergeant Davie Gray, and has dabbled in festive crime with the critically acclaimed The Deaths of December. Her latest psychological thriller is modern gothic with more than a hint of the supernatural, which she loved writing due to her fascination and fear of ghosts. She is proud to be one of The Slice Girls has been described by David Mark as ‘Dark as a smoker’s lung.’ She divides her time between Edinburgh and London and you will find her at crime-fiction events in the UK and abroad.

“When the past catches up, do you run and hide or stand and fight? When a woman is brutally attacked on a lonely country road by an escaped inmate from a nearby psychiatric hospital, Sergeant Davie Gray must track him down before he strikes again. But Gray is already facing a series of deaths connected to legal highs and a local fairground, as well as dealing with his girlfriend Marie’s bizarre behaviour. As Gray investigates the crimes, he suspects a horrifying link between Marie and the man on the run – but how can he confront her when she’s pushing him away? As a terrified Marie is pulled back into a violent past she thought she’d escaped, she makes an irrevocable decision. And when events come to a head at a house party on Willow Walk, can Gray piece together the puzzle in time to stop the sleepy town of Banktoun being rocked by tragedy once more?”

Willow Walk is book 2 in the Banktoun Trilogy written by the very talented SJI Holliday.  I read Black Wood, the first in the trilogy last year and enjoyed it.  Willow Walk is however, in my opinion, the superior book.  I’m very much looking forward to the third instalment to discover if ill-fated Banktoun can take much more!

Sergeant Davie Gray is called to the ICU following the brutal attack of an unknown woman. He doesn’t understand why he’s called but he begrudgingly goes.  Only when he arrives at the hospital does he realise that the victim bears a staggering resemblance to his girlfriend, Marie.  He’s not there to assist in the case as he first thought, he’s there for identification purposes. Thankfully it’s not Marie but she is acting strangely; pushing him away and drinking more than usual.  What secrets is Marie hiding and why is she so cagey about the letters hidden in her kitchen cupboard?  Can Davie work out what implications Marie’s past has on their future and the lives of their friends…?

I was drawn in to this book straight away by the incredibly creepy prologue.  I had to find out more!  Who was this woman and how had she ended up here, surrounded by total devastation at a drink and drug fuelled party?  From there the story builds filling in the gaps so that events start to make more sense.  I felt at times that there was a lot going on but it was still easy to follow and everything is beautifully tied up at the end.

Some of the themes are quite upsetting but SJI Holliday has done a terrific job of setting the scene without going too far.  It is quite an uncomfortable and unsettling read in places so be warned. I had a sense of foreboding (introduced by that creepy prologue) from the start, which didn’t leave me until I closed the back cover and took a deep calming breath.

Would I recommend this book?  If you’re looking for a character driven psychological thriller then I most certainly would.  It’s a cracking read, very compelling and cleverly written by Susi Holliday.

Many thanks to THE Book Club on Facebook (TBC), the author and the publisher for providing me with a copy of Willow Walk in exchange for an honest review.

Willow Walk by SJI Holliday is published by Black & White Publishing and is available in paperback and eBook formats | amazon.co.uk | amazon.com | Waterstones | Goodreads |

S.J.I. Holliday grew up in Haddington, East Lothian – a small town near Edinburgh, Scotland. She spent many years working in her family’s newsagent and pub before going off to study microbiology and statistics at university. She has worked as a statistician in the pharmaceutical industry for over sixteen years, but it was on a six-month round-the-world-trip that she took with her husband ten years ago that she rediscovered her passion for writing. Her first novel, BLACK WOOD was published in 2015, the second, WILLOW WALK is out in June 2016.

You can find out more at www.sjiholliday.com or connect with Susi via Twitter @SJIHolliday 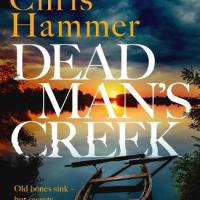