“You love your family. They make you feel safe. You trust them.

When fifteen-year-old Billy Wilkinson goes missing in the middle of the night, his mother, Claire, blames herself. She’s not the only one. There isn’t a single member of Billy’s family that doesn’t feel guilty. But the Wilkinson’s are so used to keeping secrets from one another that it isn’t until six months later, after an appeal for information goes horribly wrong, that the truth begins to surface.

Claire is sure of two things – that Billy is still alive and that her friends and family had nothing to do with his disappearance.

A mother’s instinct is never wrong. Or is it?

This book grabs you by the throat from the opening chapters introducing you to the Wilkinson family.  Within a couple of chapters I was hooked and suspicious of every character I met along the way.

I’m disappointed to say that the feeling didn’t last very long.  I really wanted to love this book but I found Claire’s fugues/blackouts quite frustrating.

Fifteen year old Billy Wilkinson is missing and has been for 6 months.  Despite pleas from his family and a thorough police investigation no one has seen or heard from Billy.  But someone must know where Billy is.  Claire, his mother, is sure of one thing – he isn’t dead. He can’t be dead.  Each member of the family has a good reason for feeling guilty about Billy’s disappearance.  So the Wilkinsons do what they do best, they keep secrets from one another and tell lies….

Threaded throughout the chapters are pages of Whatsapp dialogue which kept me guessing.  It wasn’t until I neared the conclusion of the book that I realised who the female involved actually was (I was miles out!).  I was disappointed with the reveal, I was expecting something a little…meatier.

I can’t imagine the loss and grief of losing a child and C L Taylor has done a great job of handling a very difficult subject.  This is a book about how well you know those closest to you, do you really know them at all?  It’s a good read and I can see it appealing to a lot of people but I was left disappointed and wanting more.

This is my first book by C L Taylor and despite feeling underwhelmed I intend to read both The Lie and The Accident in the future.

Three out of five stars.

Many thank to Avon Books, C L Taylor and NetGalley for proving me with an ARC copy of The Missing in exchange for an honest review.

The Missing by C L Taylor is published in the UK by Avon Books on 7th April 2016 and is available in paperback, eBook and audio formats | amazon.co.uk | amazon.com | Waterstones 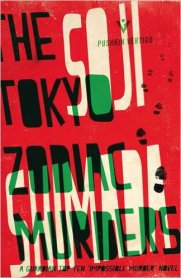 “Japan, 1936. An old eccentric artist living with seven women has been found dead- in a room locked from the inside. His diaries reveal alchemy, astrology and a complicated plan to kill all seven women. Shortly afterwards, the plan is carried out: the women are found dismembered and buried across rural Japan.

By 1979, these Tokyo Zodiac Murders have been obsessing a nation for decades, but not one of them has been solved. A mystery-obsessed illustrator and a talented astrologer set off around the country – and you follow, carrying the enigma of the Zodiac murderer through madness, missed leads and magic tricks. You have all the clues, but can you solve the mystery before they do?”

Take a compelling, intricate, well-written ‘locked room’ mystery and set it in Japan. What have you got?  Probably my perfect book!  My husband gave me this book as part of my Christmas present (one book, every month for 12 months) and he did his thorough, pain-staking research before choosing The Tokyo Zodiac Murders.  He chose a blinder!

An artist spiralling into madness decides to create his perfect woman, Azoth.  To do this he needs to kill and dismember six young woman.  Luckily for him four of his five daughters and his two nieces live in the same house as him so he doesn’t have to look too hard for his victims.

Unluckily for him he is killed and left in a locked room before he has a chance to create Azoth.  However if Heikichi Umezawa can’t make his dream woman then someone else will.  The bodies of the original six young women turn up dead, dismembered and scattered all over Japan.  Does this mean Azoth exists, and if so where is she?

The story is told from the perspective of Kazumi Ishioka who decides with his slightly strange friend, Kiyoshi Mitarai, to solve the mystery when they are presented with new evidence.  All of the clues are there for you to solve the mystery yourself so it’s a perfect read for amateur sleuths.  The culprit is of course revealed in the end so you’re not left disappointed.

I couldn’t put this book down.  It held my attention as I turned the pages and before I knew it the killer was being revealed!  There are three different investigations to uncover and each one blends seamlessly with the next.  I really warmed to Kazumi Ishioka.  He felt like the bumbling sidekick to Kiyoshi Mitarai’s super intelligent super sleuth.  Always three or four steps behind!

Did I work out who the murderer was?  No chance I’m afraid.  The book is so intricate and absorbing that I was just enjoying the story and paying little attention to what could and what couldn’t be a clue.  I absolutely loved this book and will recommend to anyone who asks in the future.  It really is THAT good.

The Tokyo Zodiac Murders by Soji Shimada was originally released in Japan in 1981.  The version I read was released by Pushkin Vertigo on 17th September 2015 and is available in paperback and eBook formats (check out the covers of the other Pushkin Vertigo Crime series – they are so gorgeous!) | amazon.co.uk | amazon.com | Waterstones

James Maybrick had secured his legacy as the most infamous serial killer of all time…his diary would one day shock the world.

Thomas Quinn wants revenge…his actions will give birth to an organisation of unspeakable power.

Together, they unwittingly set in motion a plan that will one day lead to the serial killer, Obadiah Stark.

They were The Brethren.

Maybrick is known to history by another name…”

Obadiah Stark.   The name alone is enough to give me the heebie jeebies.  Several weeks ago I reviewed the book Hellbound: The Tally Man by David McCaffrey.  I started that review by saying the name Obadiah Stark will stay with me for a long time, and it has.  You can read that review here.  So I was delighted to be able to read and review this prequel novella by the same author.  It sets the stage for Hellbound perfectly.

McCaffrey starts his novella in 1888 by assuming the identity of Jack the Ripper is that of James Maybrick, Liverpool based cotton merchant.

A little bit of history to set the scene: A journal was discovered in 1992 which was allegedly written by Maybrick; evidence was enough to connect the dots and imply that Maybrick was indeed Jack the Ripper.  That’s the history lesson over!

But what of The Brethren?  Within their ranks lies Thomas Quinn, a man with only revenge on his mind.  The all powerful Brethren have been using Maybrick to their own end but the time has come to stop the monster.  There are rumours of evidence linking Maybrick and The Brethren so Quinn is tasked with confirming it’s existence, setting an innocent up for murder in the process.  The Brethren hold all the cards and wield their power and influence when necessary and with ease.  They will stop at nothing to protect themselves…

I enjoyed this short foray into the creation of The Brethren; the  organisation behind the demise of Obadiah Stark.  I thought the way the author tied the two books together at the end was clever, using a small memorable section of Hellbound to bring the past and the present together.  And what crime fiction fan doesn’t have an interest in Jack the Ripper?

A well written blend of fact and fiction which I would recommend reading alongside Hellbound: The Tally Man.

Many thanks to Booklover Catlady Publicity and David McCaffrey for providing me with a copy of In Extremis: A Hellbound Novella in exchange for an honest review.

In Extremis: A Hellbound Novella by David McCaffrey is available in paperback, eBook and audio formats | amazon.co.uk | amazon.com | Waterstones