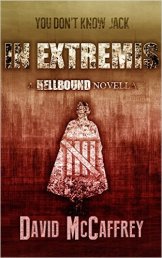 James Maybrick had secured his legacy as the most infamous serial killer of all time…his diary would one day shock the world.

Thomas Quinn wants revenge…his actions will give birth to an organisation of unspeakable power.

Together, they unwittingly set in motion a plan that will one day lead to the serial killer, Obadiah Stark.

They were The Brethren.

Maybrick is known to history by another name…”

Obadiah Stark.   The name alone is enough to give me the heebie jeebies.  Several weeks ago I reviewed the book Hellbound: The Tally Man by David McCaffrey.  I started that review by saying the name Obadiah Stark will stay with me for a long time, and it has.  You can read that review here.  So I was delighted to be able to read and review this prequel novella by the same author.  It sets the stage for Hellbound perfectly.

McCaffrey starts his novella in 1888 by assuming the identity of Jack the Ripper is that of James Maybrick, Liverpool based cotton merchant.

A little bit of history to set the scene: A journal was discovered in 1992 which was allegedly written by Maybrick; evidence was enough to connect the dots and imply that Maybrick was indeed Jack the Ripper.  That’s the history lesson over!

But what of The Brethren?  Within their ranks lies Thomas Quinn, a man with only revenge on his mind.  The all powerful Brethren have been using Maybrick to their own end but the time has come to stop the monster.  There are rumours of evidence linking Maybrick and The Brethren so Quinn is tasked with confirming it’s existence, setting an innocent up for murder in the process.  The Brethren hold all the cards and wield their power and influence when necessary and with ease.  They will stop at nothing to protect themselves…

I enjoyed this short foray into the creation of The Brethren; the  organisation behind the demise of Obadiah Stark.  I thought the way the author tied the two books together at the end was clever, using a small memorable section of Hellbound to bring the past and the present together.  And what crime fiction fan doesn’t have an interest in Jack the Ripper?

A well written blend of fact and fiction which I would recommend reading alongside Hellbound: The Tally Man.

Many thanks to Booklover Catlady Publicity and David McCaffrey for providing me with a copy of In Extremis: A Hellbound Novella in exchange for an honest review.

In Extremis: A Hellbound Novella by David McCaffrey is available in paperback, eBook and audio formats | amazon.co.uk | amazon.com | Waterstones

Beneath A Thousand Skies

Books, General Nerdery... and more than one DnD encounter

We all have the best stories.