“When a teenager is the victim of an unprovoked attack while walking his dog, a murder investigation begins.

A cruel twist of fate makes his innocent family the targets of a vicious campaign of terror.

As the detectives of Liverpool’s Major Investigation Team try to contain the violence, several key members of an organised crime family begin to topple, causing shock waves across the planet.”

Apologies to those suffering from a sense of deja vu right about now.  My recent jet-setting lifestyle (that’s Great Yarmouth, Tavistock and Newquay!) seems to have sapped my ability to use wordpress (or it’s had an update, or I just pressed the wrong button!). Many thanks to those who liked and shared this post earlier today but here’s the full version, rather than the abridged!

This is a great book which I thoroughly enjoyed from start to finish.  One of those where you can easily lose a couple of hours by becoming so drawn into the story that you don’t really notice what’s going on around you.  Such a GREAT read and I will be adding Conrad Jones to my ‘authors to keep an eye out for’ list.

Bryn is your average 14 year old lad.  He keeps himself out of trouble, has two older brothers who do the same thing and two fairly useless parents.  He’s a normal, likeable young man.  But life changes for Bryn when he encounters ‘the fat man’ whilst out walking his beloved pet dog, Alice.  After exchanging a few choice words, Bryn is chased through the local park by ‘the fat man’ and his much more athletic avenger.  Bryn suffers the beating of his short life, beaten to a messy pulp.  Exhausted and bloodied but desperate to save his dog, Bryn reaches out for the nearest object to stop the battering and finds a house brick.  Before long a murder investigation is underway and Bryn’s family are the main focus of a revenge driven organised crime family with international links.  Can they survive the reign of terror brought against them…?

Bryn is so lovely that you can’t help feeling shocked by what happens to him throughout the book; from that first savage beating and everything else that occurs after that.  There were some real jaw dropping moments for me, I felt outraged for Bryn.  How could this poor, sweet lad become a murderer (albeit, accidentally).  If you’ve read this book, did you feel the same?  I’d be interested to know.

The links between the crime families were intricate and I enjoyed seeing how one family could easily wipe out another, along with the lengths the characters would go to to protect their own backs.  There’s almost a domino effect going on which I found immensely satisfying.

Would I recommend this book?  I would.  It has a great plot with characters you will love and characters you will loathe, the perfect balance of good versus evil.  You’ll be cheering Bryn and his family on, hoping they all make it to the end in one piece (do they? Well, you’ll have to read the book to find out).  I mentioned it earlier and I will say it again, I will be keeping an eye out for Conrad Jones’s books in the future and I would love to read more of this author’s work.

Many thanks to #TBConFB and Conrad Jones for a copy of Brick in exchange for an honest review.

Brick by Conrad Jones was published in the UK by The Thriller Factory on 25th July 2016 and is available in paperback and eBook formats | amazon.co.uk | amazon.com | Goodreads | 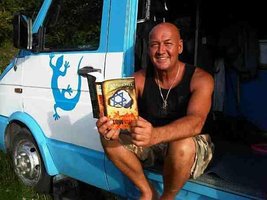 11 of his books are available in audio and his novels have been translated into six languages.

He is always keen to talk to readers and writers alike, jonesconrad5@aol.com