“Two people in exile. Two secrets. As the past tightens its grip, there may be no escape… TV presenter Allis Hagtorn leaves her partner and her job to take voluntary exile in a remote house on an isolated fjord. But her new job as housekeeper and gardener is not all that it seems, and her silent, surly employer, 44-year-old Sigurd Bagge, is not the old man she expected. As they await the return of his wife from her travels, their silent, uneasy encounters develop into a chilling, obsessive relationship, and it becomes clear that atonement for past sins may not be enough…

Haunting, consuming and powerful, The Bird Tribunal is a taut, exquisitely written psychological thriller that builds to a shocking, dramatic crescendo that will leave you breathless.”

I am thrilled to be today’s stop on the The Bird Tribunal blog tour.  The Bird Tribunal is written by Agnes Ravatn,  translated from it’s original Norwegian by Rosie Hedger and is published by the inimitable Orenda Books.  I have to say, I have never read a book quite like this before.  Strangely unsettling but a completely riveting read!

Allis Hagtorn is running away.  Something happened which has made her ‘up sticks’ and leave everything she knows behind, including her husband and her influential job.  The only way forward for Allis is to withdraw from everyday life as much as she can, submitting herself to voluntary exile.  Sigurd Bagge offers her a new job as his housekeeper and gardener, whilst his wife is away.  The job suits Allis down to the ground as Bagge’s home is remote and Bagge himself is secretive and uncommunicative.  But what secrets is Allis hiding?  And is she the only one…?

I found this a gripping read.  I had a strong feeling of impending doom from early on which stayed with me and grew stronger as I moved through the book.  It’s certainly an unsettling read and I found it oddly uncomfortable in places (not the subject matter so much as the feeling that I was intruding on the characters most private moments). That certainly didn’t put me off though!  It’s a fairly quick read and so easy to devour in the space of a few hours.  I thoroughly enjoyed it!

Allis’ neediness towards Bagge added to that uncomfortable feeling at times.  There were several points when I wanted her to walk away from the house and never look back.  I was torn in two; wanting her to leave but knowing there was something big on the way.  That delicious build up of friction between the two characters was so utterly compelling!  Not forgetting of course, that fabulous, unexpected ending.

Would I recommend this book?  I would, especially if you’re looking for a character driven, somewhat intoxicating, slow-build of a read to a surprising, yet stunning conclusion.   Packed full of secrets and shed loads of atmosphere.  It’s a great read!

Many thanks to Karen Sullivan at Orenda Books for providing me with a copy of The Bird Tribunal in exchange for an honest review.

The Bird Tribunal by Agnes Ravatn trs. Rosie Hedger was published in the UK by Orenda Books on 30th September 2016 and is available in paperback and eBook format | amazon.co.uk | amazon.com | Waterstones | Goodreads | Orenda Books | 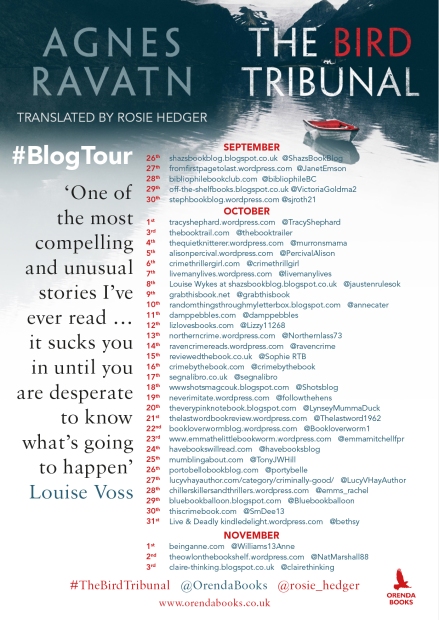 Agnes Ravatn (b. 1983) is an author and columnist. She made her literary début with the novel Week 53 (Veke 53) in 2007. Since then she has written three critically acclaimed and award-winning essay collections:Standing still (Stillstand), 2011, Popular reading (Folkelesnad), 2011, and Operation self-discipline (Operasjon sjøldisiplin), 2014. In these works Ravatn shows her unique, witty voice and sharp eye for human fallibility. Her second novel, The Bird Tribunal (Fugletribuanlet), 2013, is a strange and captivating story about shame, guilt and atonement. Ravatn received The cultural radio P2’s listener’s prize for this novel, a popular and important prize in Norway, in addition to The Youth’s Critic’s Prize. The Bird Tribunalwas also made into a successful play, which premiered in Oslo in 2015. It is published by Orenda Books in September 2016. 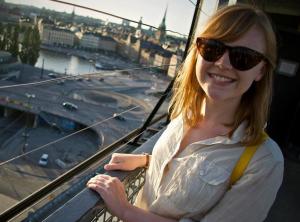 Rosie Hedger was born in Scotland and completed her MA (Hons) in Scandinavian Studies at the University of Edinburgh. She has lived and worked in Norway, Sweden and Denmark, and now lives in York where she works as a freelance translator. Rosie was a candidate in the British Centre for Literary Translation’s mentoring scheme for Norwegian in 2012, mentored by Don Bartlett. 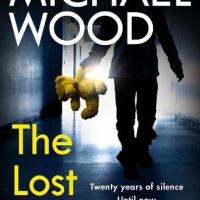