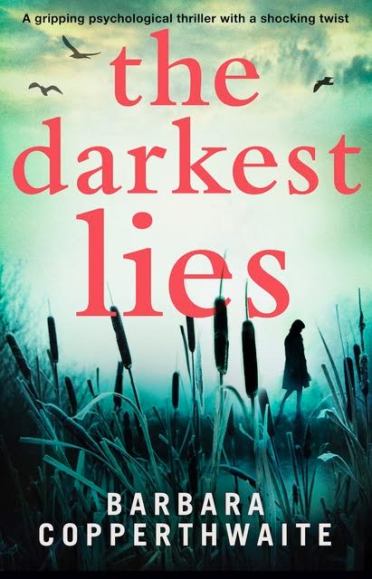 “A mother desperate for the truth. A daughter hiding a terrible secret.

Melanie Oak appeared to have the perfect life. Married to her childhood sweetheart, Jacob, the couple live with their beautiful, loving, teenage daughter, Beth, in a pretty village.

Nothing can shake her happiness – until the day that Beth goes missing and is discovered beaten almost to the point of death, her broken body lying in a freezing creek on the marshes near their home.

Consumed with grief, Melanie is determined to find her daughter’s attacker. Someone in the village must have seen something. Why won’t they talk?

As Melanie tries to piece together what happened to Beth, she discovers that her innocent teenager has been harbouring some dark secrets of her own. The truth may lie closer to home and put Melanie’s life in terrible danger…

A completely gripping psychological thriller with a twist you won’t see coming. Fans of The Girl on the Train, The Sister and Before I Let You In will be captivated.”

I am thrilled to welcome you to my stop on the The Darkest Lies blog tour which I share with the fabulous Kate over at Bibliophile Book Club.  The Darkest Lies is written by all-round lovely person and talented author, Barbara Copperthwaite.  I read Barbara’s self published Flowers for the Dead last year and fell in love with her writing (along with her incredibly likeable serial killer, Adam).  If you missed that review or would like a recap then please click here.  So I was very excited to hear that not only had Barbara been snapped up by brilliant publishers Bookouture, she was also about to publish a brand new crime thriller.

And what a thriller!  Flowers for the Dead left such a lasting impression on me that I was maybe a little harsh in my ‘bar-setting’ for The Darkest Lies.  It had to be good, and I mean really, really, unequivocally, stupendously good to merit a five star rating from me (sorry Barbara Copperthwaite, us readers have pretty high, almost unachievable standards sometimes.  It’s not just me, is it…?).  This book took me on a rollercoaster ride of emotions.  The lies, the deceit, the secrets and the fear.  It was all beautifully done.  But what I loved the most, and what hasn’t happened to me while reading for a LONG time is that I bawled my eyes out.  It was one of those big, ugly cries that is uncontrollable and very snotty.  Now I only tend to read crime and psychological thriller novels so I’m pretty used to bad things happening to good people. And I’ve read some pretty difficult and heartbreaking stuff over the years, but this book…..this book!!! This book was the one to convey the characters pain and turn this badass tough-nut reader into a smushy pile of tears.  Amazing stuff!

Thirteen year old Beth Oak plans to spend the night at her friend’s house.  Mani/pedi’s are on the agenda, lots of giggly girlie talk about boys and a sickening sweet midnight feast.  Well, that’s what Beth is telling her mum anyway.  Beth has other, much more mature things planned for her evening.  But first she needs to escape her mother and make it to the cricket pavilion in time for her date.

Melanie Oak, Beth’s mum is completely oblivious to her daughter’s hidden agenda.  She leaves her outside her friend’s house and heads home to husband, Jacob and her warm bed.  Only in the morning, when she starts to question what time Beth will be home does she realise something is terribly wrong.  Beth is missing.  Beth’s BFF doesn’t know where she is and no one from the village has seen her (despite someone, somewhere always seeing something).  Melanie begins to fall apart, drinking herself into oblivion and pushing friends and life-long neighbours away.  A chance encounter one evening in the local pub gives her the idea to start her own investigation.  After all the police, headed by DS Devonport, aren’t doing anything constructive so what harm could it do?  Will Melanie be able to discover what dark secrets her daughter was keeping and exactly what happened to Beth that fateful evening?

One of the first things which struck me about this book was the use of the second person narrative.  I’ve been pondering on this for a while now, trying to remember the last book I read which took this approach and I can’t think of a single one.  It’s unusual and made the book feel immediately different to other missing child stories.

I couldn’t turn the pages fast enough.  There I was watching this once happy and content woman unravel before my eyes.  The anguish, the fear, the fading hope all eating away at what was once a strong family-centred woman.  Oh, and the suspicion.  I loved how suspicious Melanie became of everyone around her.  The turning away of neighbours when they saw her coming down the street.  The strange flickering looks on their faces when they couldn’t escape Melanie’s interrogation.  The guarded sympathy, all wonderfully written to cast suspicion and doubt on most of the villagers.

Despite trying hard to work out what had happened to Beth, I didn’t succeed.  I was surprised (in the best way possible) by the reveal as I certainly didn’t see that one coming.  That however, is not the end of the story.  I had certain suspicions about one aspect of the book so when those suspicions were confirmed it made up for my sleuth powers letting me down in the first instance.

Would I recommend this book?  I loved The Darkest Lies and will heartily recommend it to anyone who will listen.  I adored the closing chapters which made me give a little cheer despite something quite horrific happening.  Although good doesn’t come out of this book completely unscathed, it does eventually win in the end…..just with a little rust and mud taking the shine off of its halo.

I chose to read and review an eARC of The Darkest Lies.  The above review is my own unbiased opinion.

The Darkest Lies by Barbara Copperthwaite was published in the UK by Bookouture on 12th May 2017 and is available in paperback and eBook formats | amazon.co.uk | amazon.com | Waterstones | Goodreads |

The people behind the crime, from the perpetrator to the victim and beyond, are what intrigue Barbara Copperthwaite.

She was raised by the sea and in the countryside, where she became a lover of both nature and the written word – the latter leading to a successful career as a journalist. For over twenty years people have kindly and bravely shared with her their real experiences of being victims of crime. Now, through fiction, Barbara continues to explore the emotional repercussions.

Once Upon a Time Book Blog

Living life one book at a time...