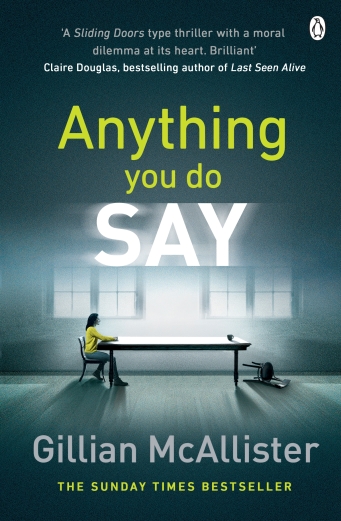 “It’s the end of the night. You’re walking home on your own.

Then you hear the sound every woman dreads. Footsteps. Behind you. Coming fast.

You’re sure it’s him – the man from the bar who wouldn’t leave you alone.

You make a snap decision. You turn. You push. Your pursuer tumbles down the steps. He lies motionless, face-down on the floor.

Call 999
Wait for the police to arrive. For judgement, for justice,whatever that may be. You just hope you husband, family and friends, everyoneyou love, will stand by you.

Run
Stay silent. You didn’t mean to do it. You were scared, you panicked. And no one saw. No one will ever know. If you leave now. If you keep quiet. Forever.

I am absolutely ashamed to admit that I haven’t (as yet!) managed to read McAllister’s debut, Everything But The Truth.  It’s another of my TBR that’s been giving me that come-hither look for a while now but thanks to my need to overindulge in blog tours it’s been left, literally ‘stood up’ on my bookshelf!  I promise, after having read the wonderful Anything You Do Say, to make it a top priority!

Anything You Do Say is quite possibly the cleverest suspense thriller I have read.  The author has managed to write two different stories (albeit with the same characters) in the one book!  Two for the price of one; what a bargain us readers are getting.  Following a night out and a frightening confrontation in a bar, Joanna heads home to husband Reuben.  Traipsing the streets of London she is suddenly aware that someone is following her.  A quick glance tells her it’s the man from the bar, the one that…. Joanna starts to panic, she knows he’s followed her so he can finish what he started.  Utterly consumed by fear and panic she lashes out at her attacker and watches as he falls, head first into a shallow puddle at the foot of the steps.  In a moment of misguided self-defence, Joanna has changed her life forever.  Now, the decision she makes will dictate the direction which her life takes.  Call the police and report the incident or run home to Reuben and pretend it never happened.  Which decision will it be…?

The reader is given a fascinating ‘Sliding Doors-esque‘ look into what happens to gentle, indecisive Joanna as she changes her life forever.  The chapters are headed either ‘cover‘, where Joanna decides to run away from what she’s done and hide her crime from everyone, even her husband Reuben or ‘reveal‘, where Joanna dials 999 and has to live with the consequences of that decision.  I found it riveting reading, the differences created; the repercussions of her situation and how it affects absolutely everything (and I mean EVERYTHING) else in her life.  Throughout the reveal chapters, I could feel Joanna’s despair emanating from the pages in front of me.  During the cover chapters, I watched as the decision totally devastated a nice, normal middle-class woman bit by agonising bit.

I’m not sure I liked Joanna.  I wanted to, and I really felt for her but I don’t think we got anywhere near the ‘liking’ stage.  I found her a little too dreamy at times and wanted to give her a good shake so she’d wake up and actually face what was happening to her.  Joanna’s husband, Reuben is also quite a frustrating character.  He’s very closed off to everyone around him, apart from his wife who he adores in his own, special way.  I desperately wanted him to notice that Joanna was gradually falling apart during the cover but he was oblivious.  Despite not really liking either of the main characters I was, however, totally invested in their lives and where, whether it be cover or reveal, they were headed.

Beautifully written and heartbreaking in places; my congratulations to McAllister for the amount of intricate research she has put into this novel.  As a reader, it was incredibly obvious to me how much time and effort had gone in to making Joanna and Reuben come alive.

Would I recommend this book? I would.  I don’t think I’ve read a suspense novel quite like this before.  It takes a little while to get your head around the fact that you are, essentially, reading two different stories about the same characters but it’s well worth it.  In a perfect world, I would have liked a more surprising conclusion but that’s just me and my personal taste!  Nothing more.  A great read with a very interesting plot which pulls you in and keeps you hooked till the end.

I chose to read and review an eARC of Anything You Do Say.  The above review is my own unbiased opinion.  My thanks to the author and Jenny at Michael Joseph for asking me to join the blog tour.

Anything You Do Say by Gillian McAllister was published in the UK by Michael Joseph, Penguin Random House on 19th October 2017 and is available in eBook and audio formats (with the paperback to follow in January 2018) | amazon.co.uk | amazon.com | Waterstones | Goodreads |

Gillian McAllister has been writing for as long as she can remember. She graduated with an English degree and lives in Birmingham where she now works as a lawyer. Her debut novel Everything But The Truth was a Sunday Times top ten bestseller.

5 thoughts on “#BlogTour #BookReview: Anything You Do Say by Gillian McAllister (@GillianMAuthor) @MichaelJBooks”

A million worlds to read and only one chair.

Once Upon a Time Book Blog