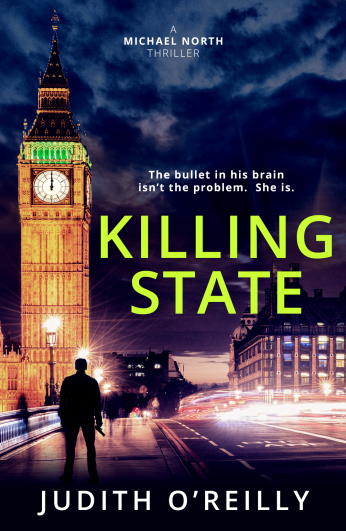 “The bullet in his brain isn’t the problem.

Michael North is a hero, with a bullet in the brain to prove it. A bullet which has rewired his neural pathways and heightened his sense of intuition. A bullet which is driving him mad.

Working for an extra-governmental agency called The Board, North knows one thing for sure. He is very good at killing very bad guys.

But what happens when a hero is ordered to kill a good woman rather than a bad man? Because it turns out that rising political star, Honor Jones, MP, can’t stop asking the right questions about the wrong people.

I am delighted to welcome you to my stop on the Killing State blog tour.  Killing State is author Judith O’Reilly’s first foray into the thriller genre having previously written two non-fiction books, Wife In The North and A Year of Doing Good.

Michael North is a war hero, a trained killer and a very intriguing character.  Despite not believing it possible during the opening chapters, I grew to be rather fond of him.  We first meet North as he is stalking his next target through a London park.  Honor Jones is the Tory MP for Mile End and has mere minutes to live.  But the tables are turned when Jones confronts her attacker, immediately questioning North about the whereabouts of her missing friend, Peggy.  North is thrown – he wasn’t comfortable with the kill in the first place – killing a man is easy, killing a woman is asking for something else altogether.  There’s something about Jones and her desperate need to find her friend, something about Jones’s traumatic upbringing which appeals to North’s better side, resulting in a decision that is likely to kill him in the long run.  That’s if the bullet in his brain doesn’t get him first!

Killing State is an action-packed, thrilling read.  I was intrigued by the prologue thinking it was going to be the same old, run-of-the-mill thriller where the dashing hired killer takes out (in a murderous way, of course!) the high flying female MP.  But it’s not.  The story took a twist I wasn’t expecting.  From then on I was transfixed with the relationship between North and Honor Jones.  She didn’t trust him, he didn’t know what to make of her and I loved that simmering chemistry between them!  By refusing to carry out an order from ‘The Board’, a secret government agency orchestrated by Lord Tarn, North signs his own death warrant as well as cementing Jones’s own demise.  The hunt is on.  Will North and Jones manage to find Peggy before The Board hunt them down and destroy them all?

The action in Killing State is full-on, it’s pretty darn intense and the levels of bloodshed are reasonably high (just the way I like my thrillers!).  This is a thoroughly enjoyable cat and mouse style thriller and at times I wasn’t sure which side was the cat and which side was the mouse!

O’Reilly’s cast of characters is something quite special.  Not only did I become quite fond of North, I also really warmed to the sassy, uber-intelligent, 14-year-old IT expert, Fangfang Yu.  As well as gutsy, hard as nails, Stella, and her flighty daughter, Jess.  They all add something noteworthy to this compelling multi-layered tale.

Would I recommend this book?  I would and I’m very much looking forward to reading the next book in the Michael North series.  If you’re a conspiracy fan then you will love Killing State.  Intricate, explosive and action-packed.  What more could a thriller fan want?

I chose to read and review an eARC of Killing State.  The above review is my own unbiased opinion.  My thanks to Anne Cater for asking me to feature on the blog tour and for providing me with a review copy.

Killing State by Judith O’Reilly ebook is published by Loughman Press on 6 November 2017. The paperback will be published on 15 March 2018 and will be available to buy from WH Smith Travel and Amazon.

Killing State by Judith O’Reilly was published in the UK by Loughman Press on 6th November 2017 and is available in eBook format | amazon.co.uk | amazon.com | Waterstones | Goodreads | 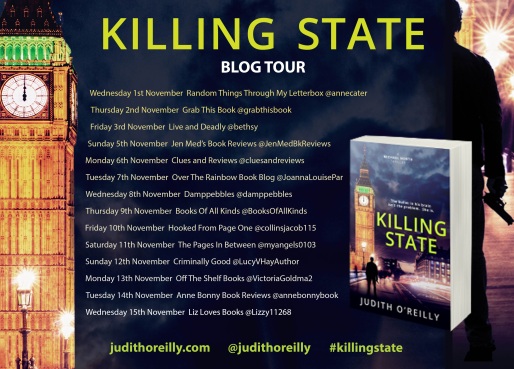 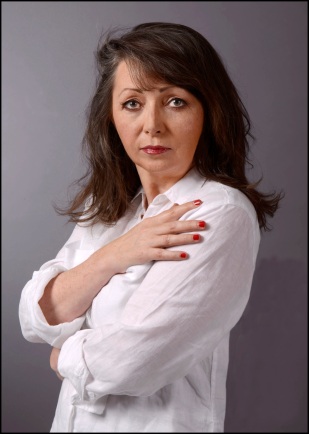 Judith O’Reilly’s claim to fame is that one of her books was a Radio 4 Book of the Week. As far as she’s concerned that’s as good as it gets.

Judith has written three books. Her latest book is called Killing State. It’s a commercial political thriller and her first novel – at least the first one she’s allowed to leave the house without her. She likes to describe it as a Lee Child meets Robert Harris, with a young and very British action hero and compelling and dynamic female characters. She may be the only person who ever thinks that. We’ll have to see.

Judith’s a former political producer with BBC 2’s Newsnight and ITN’s Channel 4 News, and a former education correspondent with The Sunday Times where she also covered politics, undercover reporting and general news. She still writes for The Sunday Times.

Her two non-fiction books were called Wife in the North and A Year of Doing Good (both published by Viking Penguin, in 2008 and 2013 respectively). Wife in the North reached number three in the UK bestsellers’ chart and was in the top ten for five weeks. It was also a top ten bestseller in Germany. It sold into ten countries, was serialised by The Sunday Times and the Daily Telegraph, was a BBC Radio 4 Book of the Week (has she mentioned that already?), and was based on Judith’s eponymous blog which was named as one of the top 100 blogs in the world by The Sunday Times. Judith’s blog is credited with kicking off the popularity of domestic blogging in the UK. For A Year of Doing Good, she did a good deed a day for a year. It did not make her a better person. She has taught memoir and blogging at Newcastle University and occasionally advises on strategic communications. Most of all though, she writes and drinks a lot of tea. Occasionally, she shakes things up and drinks coffee.