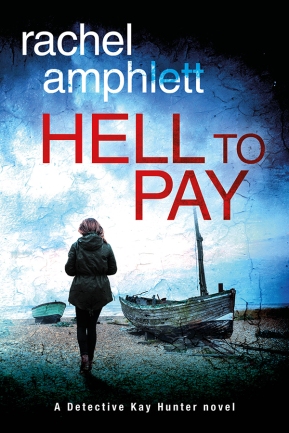 With her enemies unmasked and her career spiralling out of control, Kay’s determination to seek vengeance for the victims brings her dangerously close to those who want to silence her.

Undeterred, she uncovers the real reason behind a plot to destroy her career and sets in motion a terrifying chain of events.

Could Kay’s need for revenge be her undoing, or will she survive to see justice served?”

It is my great pleasure to welcome you today to my stop on the Hell To Pay blog tour.  Hell To Pay is the fourth book in the Detective Kay Hunter series written by talented author, Rachel Amphlett and it’s a cracking series for established as well as brand new fans of the crime genre.  I have had the joy of reading the first three books in the series (and in order, and that’s an achievement for me in itself!) so if you missed them the first time around, or would just like a refresher then please click the following titles to read my reviews; #1 Scared To Death, #2 Will To Live and #3 One To Watch.

Hell To Pay opens with Detective Hunter being called to a car accident in the dead of night.  What appears to be a fairly easy to explain incident turns a lot darker when the corpse of a young woman is found in the boot of the car.  The driver is unconscious and barely alive.  What Kay doesn’t realise is that she has moved one step closer to the man who has been making her life a misery for some time.  Regular readers of the series will be aware that Kay Hunter has been suffering from issues at home and work since the evidence in a major case she was involved with went missing.  Having been investigated by Professional Standards and miscarrying her daughter as a result, Kay is on a mission to discover who is out to destroy her.  What she discovers defies evil and could well be the death of her…

I love this series and always look forward to reading the next instalment.  I hope Amphlett continues to write about her beleaguered Detective Hunter for some time to come as they’re the sort of books a reader can lose themselves in for hours on end.  The shocking first chapter had me hooked and I was intrigued as to who the mysterious, murderous driver of the car was.  I then realised that the culprit was already in custody meaning a large percentage of the investigation was pretty much wrapped up, so I started to wonder where the author would take the rest of the story.  And that’s where things started to take a much slower pace for me.  I love this series and I will always recommend it to crime fans, but I was wanting something more to happen.  Which is probably one of the strangest things I have ever said as there is so much going on in Hell To Pay, all manner of evil and deviant deeds being carried out.  But weirdly, this time around, it just wasn’t enough to satisfy me as a reader.

The author has successfully managed to introduce her cast of characters to any new readers picking up Hell To Pay as their first Detective Hunter read.  I was thrilled to see the return of Adam, Kay’s rather gorgeous other-half, return to the pages but was disappointed when he headed north of the border for a conference, for the majority of the book.  Adam is such an essential part of Kay’s life and he keeps her grounded.  He was missed.

Would I recommend this book?  I would recommend this series 100%!  The book ends with an explosive and shocking cliffhanger, and I cannot wait to see how the situation plays out in book five.  It’s not my favourite in the series and this time around I didn’t enjoy it as much as I had hoped, but that’s just me.  There are MANY other readers out there who had a very different reading experience to mine.  Make sure you check out Ellen’s review over at Bibliophile Book Club, Meggy’s review over at Chocolate’n’Waffles blog and Amy’s review over at NovelGosssip.  That’s just a small selection of the love for this book, author and series.  I’m just an old grump!

I chose to read and review an eARC of Hell To Pay.  The above review is my own unbiased opinion.   My thanks to Emma and the author for asking me to be on the blog tour.

Hell To Pay by Rachel Amphlett was published in the UK Saxon Publishing on 16th November 2017 and is available in paperback and eBook formats (please note, some of the following links are affiliate links) | amazon.co.uk | amazon.com | Waterstones | Goodreads | Rachel Amphlett’s online eBook store |

Rachel Amphlett is the bestselling author of the Dan Taylor espionage novels and the new Detective Kay Hunter crime thriller series, as well as a number of standalone crime thrillers.

She is a member of International Thriller Writers and the Crime Writers Association, with the Italian foreign rights for her debut novel, White Gold, being sold to Fanucci Editore’s TIMECrime imprint in 2014.