“My name is Ruby. I live with Barbara and Mick. They’re not my real parents, but they tell me what to do, and what to say. I’m supposed to say that the bruises on my arms and the black eye came from falling down the stairs.

But there are things I won’t say. I won’t tell them I’m going to hunt for my real parents. I don’t say a word about Shadow, who sits on the stairs, or the Wasp Lady I saw on the way to bed.

I did tell Mick that I saw the woman in the buttercup dress, hanging upside down from her seat belt deep in the forest at the back of our house. I told him I saw death crawl out of her. He said he’d give me a medal for lying.

I wasn’t lying. I’m a hunter for lost souls and I’m going to be with my real family. And I’m not going to let Mick stop me.”

I am delighted to welcome you to the blog today as it’s my stop on The Doll Funeral blog tour.  The Doll Funeral is the second book written by Kate Hamer.  Her first, The Girl in the Red Coat, was shortlisted for the Costa First Novel Prize in 2015.  I had the pleasure of meeting Kate Hamer at the 2017 Wantage (Not Just!) Betjemen Literary Festival in October.  Hearing Hamer talk about her characters, her thought processes and how Ruby blossomed into life made me keen to read this beautifully haunting tale.

Ruby is different.  Ruby is able to see and communicate with the dead.  She has also had a harrowing upbringing.  A number of unsightly bruises and marks which need to be hidden away; she has time off school when the bruises get really bad but it’s OK, Barbara and Mick tell her what to say.  It’s never the truth.  The truth would cause too many questions, too many problems.  On her thirteenth birthday, Barbara and Mick share some news.  Ruby is adopted, she’s not their ‘real’ daughter.  The confirmation that she doesn’t belong fills Ruby with joy and she runs into the garden singing.  But this is just the beginning for Ruby.  She needs to find out where she belongs.  She must find her birth parents as she’s sure they want her back.

Ruby’s tale is a very emotional one.  So many issues that an adult would find it hard to cope with, dropped onto the shoulders of a thirteen-year-old child.  I personally struggled at times to see Ruby as a child in my mind’s eye.  Her wisdom, actions and attitude were more suited to a person in their late teens, a young adult, maybe? Perhaps Ruby is just one of those characters who are old before their time.

I thoroughly enjoyed the flashback sequences where we meet Ruby’s parents before her birth.  Seeing how her young mother, Anna, coped with the unplanned pregnancy.  The decisions that had to be made and the undoing of all of those decisions once the precious bundle of a newborn baby was placed in Anna’s arms.  Anna’s story broke my heart and I will remember it for some time to come.  Along with the names of Ruby’s adoptive parents, Mick and Barbara, but for completely different reasons.

The author has a knack of writing such beautifully descriptive and atmospheric prose that I was able to forgive some of the more far-fetched supernatural aspects of the story.  I want to put this out there so we’re all clear; I am a non-believer of ghosts and ghoulies.  Always have been and always will be unless someone can show me hard evidence of the spirit world existing.  I often struggle with a supernatural element in a book.  Sometimes it works for me, other times it doesn’t.

Would I recommend this book?  I would but it’s best to approach this novel thinking of it as a gothic ghost story (it crosses many genres but gothic ghost story prepares you for what lays ahead).  It’s enchanting, dark and multi-layered.  I would very much like to read Hamer’s debut now and compare the two works.

The above review is my own unbiased opinion.

The Doll Funeral by Kate Hamer was published in the UK by Faber & Faber on 4th January 2018 and is available in hardcover, paperback, eBook and audio formats (the following amazon links are affiliate links): | amazon.co.uk 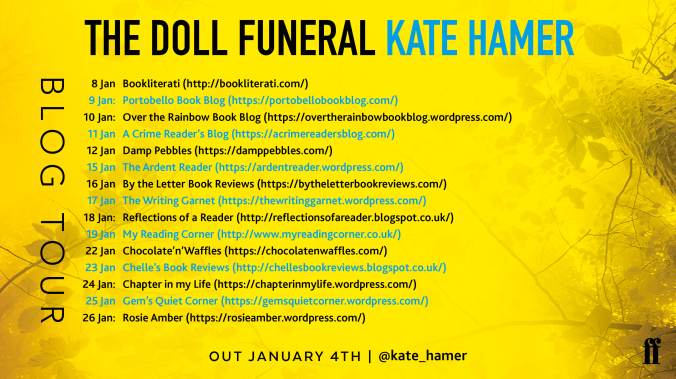 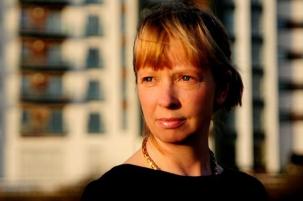 Kate Hamer grew up in the West Country and Wales. She studied art and worked for a number of years in television. In 2011 she won the Rhys Davies short-story prize and her short stories have appeared in various collections. Her debut novel The Girl in the Red Coat was published in 2015. It was shortlisted for the Costa First Novel Prize, the British Book Industry Awards Debut Fiction Book of the Year, the John Creasey (New Blood) Dagger, and the Wales Book of the Year. It was a Sunday Times bestseller and has been translated into sixteen different languages. Kate now lives with her husband in Cardiff.