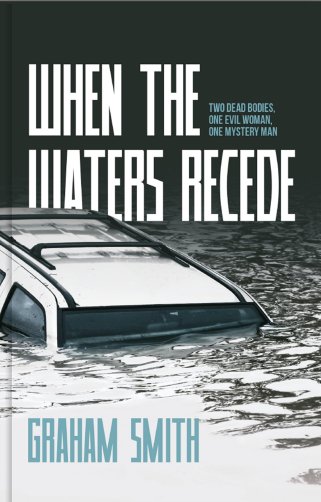 “When a car is pulled from raging floodwaters with a dead man in the front and the decapitated body of an evil woman in the boot, Cumbria’s Major Crimes Team are handed the investigation.

The woman is soon recognised, but the man cannot be identified and this leads the team and their former leader, Harry Evans, into areas none of them want to visit.

Before they know it, they’re dealing with protection scams and looking for answers to questions they didn’t know needed to be asked.”

It is my great pleasure to welcome you to the blog today and to my stop on the When the Waters Recede blog blitz.  When the Waters Recede is the latest release from Graham Smith featuring the Cumbria Major Crimes Team and their dogged ex-guv, DI Harry Evans.  Except he’s Mr Harry Evans now after being retired off some time ago and replaced with the unlikable, self-absorbed DI John Campbell.

This is the second full-length novel featuring Harry Evans which I have read, the first being I Know Your Secret.  And I’ve had the pleasure of reading two of The Major Crimes Team (MCT) novellas; Matching the Evidence and No Comment.  But I came to this series part way through so there are two further books which I haven’t read as yet, Lines of Inquiry (novella) and Snatched From Home (not to mention Smith’s EPIC Jake Boulder series published by Bloodhound Books).

Having read No Comment, the latest MCT novella a couple of months ago my appetite was well and truly whetted and I was looking forward to making a start on When the Waters Recede.  The book opens with a tragic accident due to the unseasonal rains and flooding.  A car is dramatically pulled from the flood water, the driver of the car unfortunately deceased.  DC Lauren Phillips is there to formalise proceedings but, when looking for clues as to the driver’s identity, she makes a horrifying discovery in the boot of the car.  A woman’s naked body minus a head.  Thankfully the victim’s head is stashed with the body which leads to a quick identification and turns out to be a notorious, hated local criminal.  What Lauren and the team don’t realise is that in searching for the identity of the driver and potential murderer, they will end up in the middle of an investigation they never foresaw.

There’s something about Smith’s characters which make the reader feel invested in them.  I, for one, am not particularly fond of DC Lauren Phillips (something I may have mentioned before) and she does play a significant part in this book.  But despite not necessarily liking her, I felt I had to find out what she was up to, what was going to happen to her and to the team.  My favourite characters have always been Harry Evans, DS Neil Chisolm and DC Amir Bhaki.  But without Phillips and DI Campbell, I just don’t think the team dynamics would work as well.

The plot is interesting and keeps you on your toes as it tends to flit from the initial investigation of a decapitated body to a bigger, unexpected case.  A case that leads to one of the team coming face to face with a remorseless killer!  Harry was as gruff as ever and I loved seeing how he was adjusting to life as a police consultant rather than ‘the Guv’ and leading the pack.  I have to say, and this is probably just me, that the reoccurring references to a middle-aged, balding man’s building libido was a little….well, off-putting really.  I can see how this was a major part of the story, why the author has made such a plot point of it but UGH.  Characters may have ‘needs’ but I’d rather that they keep them to themselves, lol!

Would I recommend this book?  I would.  It can be read as a standalone but the characters have so much history behind them that you may feel you’ve missed something if you don’t start at the beginning.  A great series and one I will return to again and again.  Personally, I cannot wait for the next book as I think Harry’s going to be in for a bit of a rough ride if the final chapter of When the Waters Recedes is anything to go by.

I chose to read and review an eARC of When the Waters Recede.  The above review is my own unbiased opinion.

When the Waters Recede by Graham Smith was published in the UK by Caffeine Nights on 31st May 2018 and is available in paperback and eBook formats (please note, the following links are affiliate links): | amazon.co.uk | amazon.com | Waterstones | Book Depository | Goodreads |

Giveaway:
To celebrate the release of When the Waters Recede, Graham Smith is offering one lucky reader the chance to win all six books in the Harry Evans series.

To enter, simply sign up for his newsletter via the link provided before the 5th of June 2018 and you’ll be entered into not just this competition, but all competitions that he runs. International entrants are welcome.
http://blogspot.us9.list-manage.com/subscribe?

Graham Smith is a time served joiner who has built bridges, houses, dug drains and slated roofs to make ends meet. Since Christmas 2000, he has been manager of a busy hotel and wedding venue near Gretna Green, Scotland.

Graham is the founder of Crime and Publishment, a weekend of crime-writing classes which includes the chance for attendees to pitch their novels to agents and publishers. Since the first weekend in 2013, eight attendees have gone on to sign publishing contracts.

Beneath A Thousand Skies

Books, General Nerdery... and more than one DnD encounter

We all have the best stories.