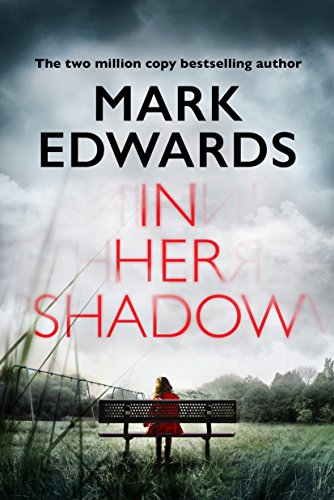 For four years Jessica has never doubted that her sister Isabel’s death was an accident. But when Jessica’s young daughter seems to know long-forgotten details about her aunt’s past, Jessica can’t shake the feeling that there’s a more sinister truth behind the tragedy.

As Jessica unearths disturbing revelations about her sister, and about the people she loved and trusted most, it becomes clear Isabel’s life was less than perfect and that Jessica’s might also be at risk.

Did someone murder Isabel? Are they now after Jessica and her family? The key seems to lie in the hands of a child. Can Isabel reveal the truth from beyond the grave, or is the answer closer to home?”

It is my great pleasure to welcome you to the blog today and to my stop on the In Her Shadow blog tour. In Her Shadow is the latest release from bestselling author, Mark Edwards, and is set to be published by Thomas & Mercer later this week on 4th October 2018.

When Mark Edwards publishes a book, I read it. It’s that simple really. He’s an author whose writing I am happy to return to again and again. To prove my point, here are my reviews of Mark’s previous books; Follow You Home, The Devil’s Work, The Lucky Ones and The Retreat. I’ve also read ‘The Magpies’ which started it all for me a few years back. All wonderful, immersive pieces of fiction and highly recommended.

Making a start on Mark Edwards’s latest book is a strangely nerve-wracking experience for me. I have loved everything I have read by this author so far. Will this be the first book to disappoint? Will I love it as much as the others? Well, the answer to those two questions is that it did NOT disappoint but I maybe didn’t love it as much as his previous releases. Let me explain. Once again, Edwards has penned a highly readable, family focussed psychological thriller. What he does best in my opinion. However, this book has an overarching paranormal element to it, and the inclusion of any kind of paranormal ‘activity’ in a novel tends to leave this reader feeling cold. But that’s me. Your feelings on the matter may be completely different to mine and that, I find, is one of the joys of reading, and books in general. Saying that, the paranormal elements to the story were extremely well done and at points I felt shivers run down my spine – particularly in the first half of the book. Little Olivia really did freak me out.

Edwards really knows how to write a fully formed, living, breathing character. I was drawn to Jessica and her deceased sister, Isabel. In fact, I would go as far as saying Isabel was my favourite character in the book. There are wonderful flashback sections throughout so what I’m saying isn’t completely crazy (read the blurb if you’re not sure what I’m talking about). I loved her feistiness, her boundless self-confidence and her ambition. Also her strong sense of right and wrong. Jessica very much pales in her sister’s shadow. Olivia was also a firm favourite, despite the fact she did send shivers down my spine at points. I couldn’t get over how authentic Edwards made her voice.

Would I recommend this book? I would but why recommend one when you can recommend them all! I felt there was a stronger lean towards the ‘women’s fiction’ genre in In Her Shadow which I have nothing against but it’s really NOT my thing. It’s also a little sexy which again, I could have done without. However, Mark Edwards is a supremely talented writer and if you haven’t read any of his books yet then we need to have serious words. A strong family driven thriller which I enjoyed. Recommended.

I chose to read and review an eARC of In Her Shadow. The above review is my own honest unbiased opinion.

In Her Shadow by Mark Edwards was published in the UK by Thomas & Mercer on 4th October 2018 and is available in paperback, eBook and audio formats (please note, some of the following links are affiliate links which means I receive a small percentage of the purchase price at no extra cost to you): | amazon.co.uk | amazon.com | Waterstones | BookDepository | Goodreads |

He also co-writes with Louise Voss. Their novels are: Killing Cupid (2011); Catch Your Death(2011); All Fall Down (2012); Forward Slash and a series featuring Detective Inspector Patrick Lennon, starting with From the Cradle (2014) and The Blissfully Dead (2015). Read more about Voss & Edwards.