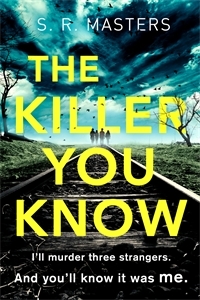 “I’ll murder three strangers. And you’ll know it was me. That way we’ll all be connected. Always.

When Will jokes about becoming a serial killer, his friends just laugh it off. But Adeline can’t help but feel there’s something more sinister lurking behind his words.

Fifteen years later, Adeline returns to Blythe for a reunion of the old gang – except Will doesn’t show up. Reminiscing about old times, they look up the details of his supposed murder spree. But the mood soon changes when they discover two recent deaths that match.

As the group attempt to track Will down, they realise that he is playing a sinister game that harks back to one they used to play as kids. Only this time there are lives at stake…“

I am absolutely delighted to be the fifth and final stop on the hunt for The Killer You Know this week.  If you’ve been following proceedings since Monday you will know that today is the day to make your deductions and choose your killer friend.  Make sure you tweet the name of your suspect and your reasons for choosing them using the hashtag #TheKillerYouKnow to be in with a chance of winning a copy of the book!

Four possible killers have been paraded before you and today I offer the fifth.  Before I introduce Will, here’s a recap of this week’s posts:

Personally, I haven’t the foggiest who the killer friend is which is why I’m leaving the sleuthing to you!

Let’s add our fifth and final friend to the mix and find out more about Will….

Sure, the last time the gang all saw Will he told them all he’d be a serial killer when he was older. But that was just classic Will. He was always saying funny stuff like that. Funny stuff that was often more just, well, creepy than funny—but always weird. But then Will comes from a funny family, one that’s seen its own share of tragedies down the years. So yeah, maybe he was misunderstood. And maybe always being seen as the weirdo actually made him that way? And perhaps his resentment about that is why he hasn’t shown up to the reunion. Why he’s vanished from social media entirely and left no trace of himself. And yet, why does it still feel like Will has come? Even though he’s not there bodily, why does it feel so much like… he’s watching them all.

Oooh, I actually like the sound of creepy Will.  Sounds like my kinda guy!  What do you think, is Will the killer?

Get tweeting folks.  Remember to include your suspect’s name, your reasons for choosing them and the hashtag #TheKillerYouKnow.  Good luck. (I’m still totally clueless, by the way…)

The Killer You Know by S.R. Masters was published in the UK by Sphere on 30th August 2018 and is available in eBook format | amazon.co.uk | amazon.com | Goodreads |

One thought on “The Killer You Know with S.R. Masters: Day Five (@SRMastersAuthor) @TheCrimeVault”