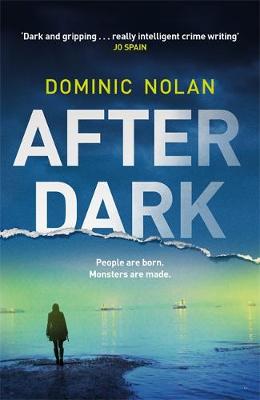 “PEOPLE ARE BORN. MONSTERS ARE MADE.

After a shocking discovery, the police must unravel a mystery that horrifies the nation.

A detective condemned as a criminal

Violently abducted while searching for a missing woman, D.S. Abigail Boone suffered retrograde amnesia – remembering nothing of her previous life. Defying the law to hunt those responsible, she now languishes behind bars.

A monster hiding in the shadows

In desperation, police turn to Boone – who fears a connection to the disappearance of a child three decades earlier…and a mysterious underworld figure whose name is spoken only in whispers. Freed from prison, what will Boone sacrifice – and who must she become – to uncover the terrifying truth?”

Hello and welcome to damppebbles. Today I am delighted to be sharing my review of After Dark, the second book in Dominic Nolan’s Abigail Boone series. Had life been ‘normal’ then today would have been May’s First Monday get-together in London, which Dom was due to appear at. But life is a little upside down at the moment so instead you’ll have to make do with my ramblings about Dom’s latest book instead (it’s brilliant!). I received a free copy of After Dark but that has in no way influenced my review.

Wow, this is some book! Gritty and unflinching, I was drawn into Boone’s world from the get-go. With a brilliantly brutal prologue, if, like me, you go into After Dark wondering what to expect from former-Detective Abigail Boone, then the scene is swiftly set. I was instantly hooked and I wanted to find out more. Now I should probably mention at this point that I haven’t read the first book in the series, Past Life but I really want to. I wanted to read it before a copy of After Dark landed in my mitts, as I had heard good things (really, really good things!) from fellow crime readers. After Dark can be read as a standalone but I think it would be beneficial to start at the beginning and follow Boone’s story from the beginning. Boone’s situation is laid clearly before the reader by the very talented Nolan but I felt as though I was missing out, like I’d arrived a little late to the party. Could just be my overexuberant sense of FOMO though!

Former Detective Abigail Boone is a masterpiece, a stand-out character among her crime-fighting peers. If you’re a regular reader of crime fiction then I can assure you that you’ve not met anyone like Boone before. Boone suffers from retrograde amnesia following an accident which could have killed her. The first chunk of her life not even a distant memory. Just a big fat blank. The accident, the consequences and everything Boone lost (and in some strange ways, gained) is touched upon in the novel. Turning her back on the Force, Boone opts to dish out her own brand of justice and it’s compelling reading. Gung-ho, violent, reckless and not for the faint hearted, Boone takes the reader on an intense and thrilling ride, and I loved it!

The story is split between the past (four or five years ago) and the present. It’s a beautifully detailed and intricate tale, but I found I had to concentrate a little more to keep tabs on where in time we were. The reason for that could be something to do with not reading Past Life first, meaning I wasn’t familiar enough with the characters and what had gone before (as previously mentioned – this will be rectified, I will be reading Past Life).

I haven’t even begun to tell you about the plot yet. There really is so much to say about this brilliant book but I’ll try and keep it brief. When a young girl is found wandering the back lanes  of Kent on her own, looking malnourished and abused, DI Barbara Bowen (who is glorious!) is called in. This is the main storyline which runs through the book. The abuse the girl has been subjected to is horrific, inhuman and the stuff the very worst nightmares are made of. The author doesn’t go into detail but the abuse is discussed among the characters, conclusions are drawn and the over-riding subject matter of the book is what happened to the poor girl and the search for the monster who destroyed her. Boone is ‘sprung’ from prison early (it’s all very legal and above board) by DI Bowen in an attempt to help catch the predator, evil incarnate.

Would I recommend this book? I would, yes. But I think it’s worth getting a copy of Past Life and starting there so you can appreciate every brilliant moment of After Dark to it’s fullest. I need more Boone in my life. Gritty, dark, intelligent crime fiction at it’s best. Something a bit different and I flipping loved it! Nolan is definitely an author to watch out for. I’m really, really excited to see what the future holds.

I chose to read and review an ARC of After Dark. The above review is my own unbiased opinion.

After Dark by Dominic Nolan was published in the UK by Headline Books on 5th March 2020 and is available in hardcover, audio and digital formats with the paperback to follow in July (please note, the following links are affiliate links which mean I receive a small percentage of the purchase price at no extra cost to you): | amazon.co.uk | Waterstones | Foyles | BookDepository | Goodreads |

Dominic Nolan is a British author, known for the Abigail Boone series of crime novels.