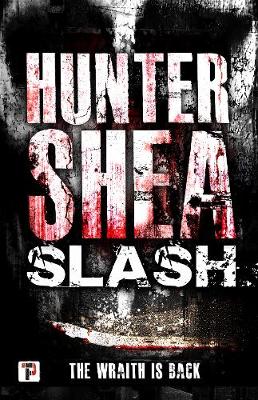 “Five years after Ashley King survived the infamous Resort Massacre, she’s found hanging in her basement by her fiancé, Todd Matthews. She left behind clues as to what really happened that night, clues that may reveal the identity of the killer the press has called The Wraith. With the help of his friends, Todd goes back to the crumbling Hayden Resort, a death-tinged ruin in the Catskills Mountains.

What they find is a haunted history that’s been lying in wait for a fresh set of victims.

The Wraith is back, and he’s nothing what they expected.”

Hello bookish friends and welcome to damppebbles. I am delighted to be sharing my review of Slash by Hunter Shea with you today. Slash was published by Flame Tree Press on 24th October 2019 and is available in hardcover, paperback and digital formats. I chose to read and review an eARC of Slash but that has in no way influenced my review.

Holy moly, this is a cracker of a book! If you’re a regular visitor to the blog then you may know that I love the horror genre as much as I love crime fiction! I’m particularly fond of the ’80s slasher movie’ novels and tend to turn to horror when my reading mojo ups and leaves. I asked for recommendations a few months back and the lovely Sharron at booksbehindthetitle suggested I gave Slash a go as she’d recently read it and thought it would appeal. She was 100% right. I devoured this book. Slash has everything I look for in a horror novel but with so much more dolloped on top (in a steaming, festering, bloody pile).

Ashley King was the sole survivor of the Hayden Resort Massacre five years ago. Yup, she’s a Final Girl. Todd Matthews, her fiancé, returns home one day to find her lifeless body hanging in the basement. Heartbroken and grieving for his lost love, he returns to the site of the massacre to find out what really happened that fateful night. A serial killer named ‘The Wraith’ has always been held responsible for the murders and Todd, and his totally unprepared band of friends, want answers. But what they find living in the ruins of the Resort is a whole lot more than they ever expected….

This is Shea’s homage to slasher movies and I really enjoyed the high-stakes terror and the unashamed gore fest of Slash. But all is not what it first appears. This is the second book I’ve read by Hunter Shea – the first being Creature which is also well worth a look – but I get the feeling that Shea (and this really is just a feeling having read only two of this author’s books – don’t hate me if I’m wrong) has a very distinct style, which Slash benefits from. The story really ramped up a number of notches and was given an almighty gut pulverising twist.

Would I recommend this book? I would, yes. This is a blood soaked, rip roaring ride of a book and I loved every minute of it. If you’re not a fan of gore in your novels then perhaps this isn’t for you. But if you’ve got the stomach, this is one that shouldn’t be missed. It ticked so many boxes for me and I’m adding Shea’s previous books to the TBR.

I chose to read and review an eARC of Slash. The above review is my own unbiased opinion.

Slash by Hunter Shea was published in the UK by Flame Tree Press on 24th October 2019 and is available in hardcover, paperback and digital formats (please note, the following links are affiliate links which mean I receive a small percentage of the purchase price at no extra cost to you): | amazon.co.uk | amazon.com | Waterstones | Book Depository | Goodreads |

Hunter Shea is the product of a misspent childhood watching scary movies, reading forbidden books and wishing Bigfoot would walk past his house. He doesn’t just write about the paranormal – he actively seeks out the things that scare the hell out of people and experiences them for himself. Hunter’s novels can even be found on display at the International Cryptozoology Museum. His video podcast, Monster Men, is one of the most watched horror podcasts in the world. He’s a bestselling author of over 13 (lucky number!) books, all of them written with the express desire to quicken heartbeats and make spines tingle. Living with his wonderful family and two cats, he’s happy to be close enough to New York City to gobble down Gray’s Papaya hotdogs when the craving hits.