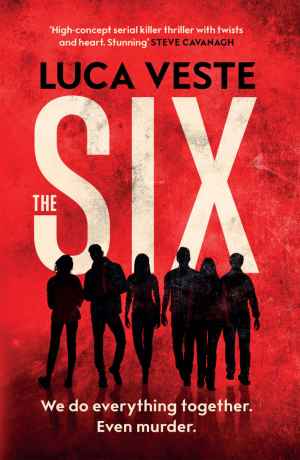 “Six friends have been trapped by one dark secret.

It was supposed to be our last weekend away as friends, before marriage and respectability beckoned. But what happened that Saturday changed everything.

In the middle of the night, someone died. The six of us promised each other we would not tell anyone about the body we buried. But now the pact has been broken. And the killing has started again …

Who knows what we did? And what price will they make us pay?”

Hello and welcome to damppebbles. Today I am delighted to be sharing my review of the rather marvellous The Six by Luca Veste with you. The Six was published by Simon and Schuster in digital and paperback formats on 1st January 2020. I received a free eARC of The Six but that has in no way influenced my review.

The Six sang to me! It called my name and screamed ‘MUST READ’ as soon as I laid eyes on it. What a perfect synopsis and what a glorious cover. Not to mention, of course, that every Luca Veste book I have read in the past has been an absolute winner. I thoroughly enjoyed this tense, unsettling read.

Six friends (three couples to be precise) in their 30s who feel the impending ties of age and responsibility pack up their tents and head to a 90s music festival to relive their youth for a weekend. Turning the clock back to the days when they had no cares, no real responsibility and life was one big endless party. They throw caution to the wind, indulge a little and let their hair down. But then something happens and someone is killed. They panic, everything about the situation makes them look really really bad, so they bury the body and swear to never tell anyone else or talk about it again. They convince themselves that they’ve done the right thing. That in the end, everything will work out for the best. That is, until another body is discovered and they realise someone outside the group knows their devastating secret…

This is a wonderful character-driven book and another cracker from Veste. The Six starts with quite a light-hearted tone, with lots of references to 90s culture which I absolutely lapped up. The group are all a little younger than me so I really related to their memories of the music and culture of the time. Then things take a deadly turn. From there, it’s downhill for the group and life will never be the same again. The reader is whisked from the shocking events of that fateful night to one year later, where things are very different. I was on the edge of my seat wanting to see how one daft decision would impact a group of characters, some I was starting to warm to. The secret they carry weighs heavy, relationships have broken down and guilt is gradually destroying their lives. But that’s all I’m going to say on that because this is a serial killer thriller and I feel that by saying much more, I’ll reveal something I shouldn’t and nobody wants that. 😉

Would I recommend this book? I would, yes. If you’re a fan of slow-burn psychological suspense novels with a cast of intriguing characters then you definitely need to pick The Six up. This book, for me, was all about the characters as I watched them slowly unravel as they realised what a terrifying predicament they had found themselves in. Very well written, clever plotting and tons of wonderful suspense. Recommended.

I chose to read and review an eARC of The Six. The above review is my own unbiased opinion.

The Six by Luca Veste was published in the UK by Simon and Schuster on 1st January 2020 and is available in paperback, audio and digital formats (please note, the following links are affiliate links which means I receive a small percentage of the purchase price at no extra cost to you): | amazon.co.uk | Waterstones | Foyles | Book Depository | Goodreads |

Luca Veste is a writer of Italian and Scouse heritage, married with two young daughters, and one of nine children. He is the author of the Murphy and Rossi novels and forthcoming standalone The Bone Keeper. His books have been translated and published in the USA, Germany, Czech Republic, and Poland.

Part psychological thriller, part police procedural, the Murphy and Rossi novels take place in the city of Liverpool. Taking in both sides of a contrasting city, they explore the changing landscape of Liverpool and “bad” things which can happen within it.

His first standalone novel – The Bone Keeper – was published in March 2018 and is a slight departure from the series. Part thriller, part horror, it has been described by as like ‘Silence of the Lambs meets Candyman’.

He was the editor of the Spinetingler Award nominated charity anthology ‘Off The Record’, and co-editor of ‘True Brit Grit’, also an anthology of short stories for charity.

He is a former civil servant, actor, singer and guitarist (although he still picks it up now and again). In his acting days, he appeared as a “background artist” – read: extra – on a number of Brookside and Hollyoaks episodes and also once spent three nights in a black leather mini-skirt and high-heels, in front of an ever-dwindling audience in a Liverpool theatre.

One thought on “#BookReview: The Six by Luca Veste @simonschusterUK #TheSix #damppebbles”