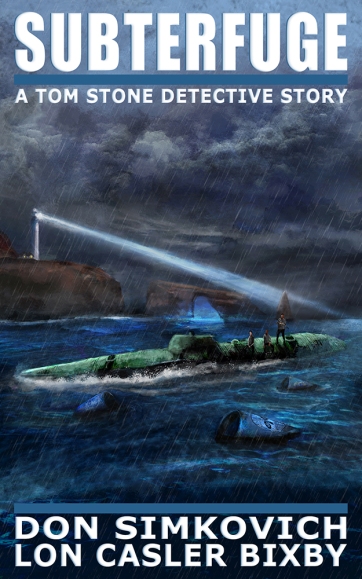 “A wounded man, fiberglass wreckage, and mysterious blue barrels wash up on a secluded beach north of Los Angeles in Malibu, California.

The Ojos Negros cartel forms an uneasy alliance with LA mob boss Frank DeVito. Using hidden sea caves as drop-off points, the new syndicate maneuvers to expand their brutal drug empire, and guns down anyone who stands in their way.

Stone and his team trail the lone survivor, Luis Delgado, who longs to return home to Mexico but is trapped in a deadly game of subterfuge. He vows revenge on the evil men who have destroyed his life and countless others with their greed.

The Detectives race to find Delgado and bring down the cartel, before another innocent victim is killed.

Uncover narco-subs plying the seas with page-turning action—and hold on for an explosive ending.”

Hello and welcome to damppebbles! Today I’ve handed the keys to the blog over to my guest reviewer, Ryan, who is going to share his thoughts on the fifth Tom Stone Detective Story – Subterfuge. Subterfuge was published on 6th November 2020 and is available in paperback and digital formats. Ryan chose to read and review a free digital copy of Subterfuge but that has in no way influenced his review.

Subterfuge is the first novel I have read by the team of Simkovich and Casler Bixby. It’s an intriguing story of smugglers, mafia style gangs and the police trying to stop them. When two cartels collide there is always friction and the creaky alliance made between the leader known as ‘Rabbit’ and De Vito’s gang stops this being the classic Cops vs Gangs, adding a third dimension for alliances and treachery.

One aspect of Subterfuge that shone through was the character of Luis Delgado. Delgado is the lone survivor from a failed drugs run. His life has been destroyed and he’s scared of going home in case the cartels find him. He becomes the unpredictable element in a story filled with drama. Casler Bixby and Simkovich have written a story that can be seen from 4 sides. The Cops (Stone and Sharpe) are a good pairing. Determined to get results even if it means using some friends in low places. De Vito’s cartel is a scary place to live – “serve well or die quickly” appears to be the unofficial motto. De Vito’s empire is growing with just one thorn in his side – the Ojo Negros Cartel. So when Rabbit from the Ojo Negros walks into De Vito’s stronghold and declares a partnership an uneasy truce starts to take place. The fourth and final view is from Delgado who finds himself in the middle of a situation he could never have imagined. A twisted character torn between revenge, staying alive and justice – which way will he turn?

Every time I opened this book I was desperate to see whether the characters would survive. Who would be gaining the upper hand and who would be taking a one way ticket on the next submarine smuggling drugs across the oceans. The authors do a wonderful job of making the readers feel empathy for some of the victims of the cartels. You want to protect them, you want them to win out, but you know they are up against all the odds and the chances of them being double crossed are high. The authors keep the action high throughout the book, luring the reader on for one more page in expert fashion.

Subterfuge is a recommended read for anyone looking for a thriller with plenty of action and strong characters. It will pull you in and keep you riveted until the final page. I’m sure there is more to come from the authors and I will be keeping my eyes peeled.

I chose to read and review a free copy of Subterfuge. The above review is my own unbiased opinion.

Subterfuge by Don Simkovich & Lon Casler Bixby was published in the UK by Carved in Stone Media on 6th November 2020 and is available in paperback and digital formats (please note, the following links are affiliate links which means I receive a small percentage of the purchase price at no extra cost to you): | amazon.co.uk | amazon.com | the damppebbles bookshop.org shop | Goodreads |

Don returned to his love for writing fiction after years of writing and narrating a radio spot series, marketing copy, and handling the pressures of a wild and crazy family life.

Frequent calls to the local Sheriff’s office, plus the intensity of handling teen alcoholism and teen pregnancy pressed stories from his mind like Earth’s weighty layers turn shale into harvestable fuel.

Well, you get the picture.

He lives at the base of the San Gabriel Mountains with his family, two dogs, and anyone else who happens to drop by and live for a spell. 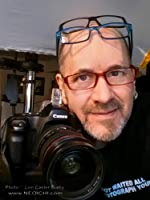 Lon is a published author in various genres: Fiction, Poetry, Humor, Photography, and Comic Books. He is also a professional award-winning photographer whose work has been featured in a wide variety of magazines, art & coffee table books, and has also been displayed in Art Galleries throughout the world.

Lon lives out of his photography studio in Burbank, California where he shares his living space with his wonderful, albeit spoiled, Silver Lab named Silver.