“Are you ready for the journey to the edge?

A deadly flu epidemic sweeps through Moscow, killing hundreds of thousands. Anya and her husband Sergey decide they have no choice but to flee to a lake in the far north of Russia.

Joining them on their journey are her son and father-in-law; Sergey’s ex-wife and son; and their garish neighbours. But then some friends of Sergey show up to complete Anya’s list of people she’d least like to be left with at the end of the civilised world.

As the wave of infection expands from the capital, their food and fuel start to run low. Menaced both by the harsh Russian winter and by the desperate people they encounter, they must put their hatreds behind them if they’re to have a chance of reaching safety…

Inspired by a real-life flu epidemic in Moscow, To the Lake was a number one bestseller in Russia, and has now appeared in a dozen languages and been adapted into a Netflix TV series.”

Hello and welcome to damppebbles. Today I am delighted to be joining the blog tour for To The Lake by Yana Vagner (translated from it’s original Russian by Maria Wiltshire). To the Lake was published in hardcover by Swift Press on 4th November 2021 and is also available in digital format. I chose to read and review a free ARC of To The Lake but that has in no way influenced my review. My grateful thanks to Rachel at Swift Press for sending me a proof copy.

A viral pandemic isn’t so much fiction these days as cold, hard fact. And as a result, my interest in books featuring a pandemic has somewhat waned recently. Until I saw To The Lake mentioned on social media. I am a huge fan of translated fiction but for some reason, I’m not reading as much as I used to. So this book, originally written in Russian, with it’s unforgiving, icy setting and end of the world feel, really appealed.

Anya and Sergey, along with Anya’s teenage son Mishka, live a quiet life in their nice, modern house on the outskirts of Moscow. Until the news breaks that a new virus is slowly shutting down the city. Before long, Moscow is closed. The virus is spreading and there’s no cure. Friends, family and neighbours are dying all around them so they decide, following a particularly nasty incident with a group of vigilantes and encouragement from Sergey’s father, to flee to a lake house miles away from civilisation and start a new life. Joining them are their neighbours, Sergey’s ex-wife and young son. But the road ahead is fraught with danger. Will they make it to the lake alive and well, or will the journey be the death of them…?

To The Lake is a very vivid, atmospheric read full of tension. I loved the Russian setting with it’s sub-zero temperatures, frozen landscape and ice crusted roads. The extreme weather added another threat to the travellers’ already dangerous journey and I really enjoyed how the descriptions of the landscape made me feel as though I was squashed into one of the cars alongside the characters, gazing out of the window at the passing scene, not knowing what was on the horizon.

The impending sense of doom throughout the novel is handled brilliantly. I was on the edge of my seat as the group heard the rumble of tyres approach in the distance. Would the new arrivals be friend or foe? Would they have succumbed to the virus and be unconcerned about infecting others? Was this the end for the group? I enjoyed the initial apprehension and build-up sometimes more than discovering who was actually approaching. Sometimes, and this is probably just me and my dark heart, I wanted a little more from the meetings. I felt the tension build, only to discover that the threat wasn’t really a threat at all. Or, in situations where there was a real weapon-wielding threat, the action was over very quickly and the group were moving on. I would have liked a little more.

Would I recommend this book? I would, yes. To The Lake is a well-written novel which transported me to the harsh frozen lands of Russia. The plot is all too plausible in this day and age but written years before the COVID pandemic hit, this bleak, character-driven race-to-survive novel will add an extra chill to those winter nights. I will admit that I found the book a touch hard going at times but perhaps that is due to it all being a little too close to home. Obviously, it is different. Very different. But still… All in all, a very interesting, frightening tale which I enjoyed. Recommended.

I chose to read and review a free ARC of To The Lake. The above review is my own unbiased opinion.

To The Lake by Yana Vagner (translated by Maria Wiltshire) was published in the UK by Swift Press on 4th November 2021 and is available in hardcover and digital formats (please note, the following links are affiliate links which means I receive a small percentage of the purchase price at no extra cost to you): | amazon.co.uk | Waterstones | Foyles | Book Depository | bookshop.org | Goodreads | damppebbles bookshop.org shop | 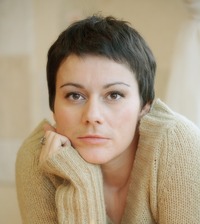 Yana Vagner was born in Moscow in 1973 into a bilingual family. Her Czech mother came to Moscow in the 60s to study Russian language and literature. Yana graduated from Russian State Humanitarian University with a major in management and has worked as an interpreter, an anchorperson on radio, and a logistics manager, which allowed her to travel to Africa, Europe and Latin America. Yana Vagner lives with her husband and two dogs in their country house on the outskirts of Moscow.