When climber Nick Grevers is brought down from the mountains after a terrible accident he has lost his looks, his hopes and his climbing companion. His account of what happened on the forbidden peak of the Maudit is garbled, almost hallucinogenic. Soon it becomes apparent more than his shattered body has returned: those that treat his disfigured face begin experiencing extraordinary and disturbing psychic events that suggest that Nick has unleashed some ancient and primal menace on his ill-fated expedition.

Nick’s partner Sam Avery has a terrible choice to make. He fell in love with Nick’s youth, vitality and beauty. Now these are gone and all that is left is a haunted mummy-worse, a glimpse beneath the bandages can literally send a person insane.

Sam must decide: either to flee to America, or to take Nick on a journey back to the mountains, the very source of the curse, the little Alpine Village of Grimnetz, its soul-possesed Birds of Death and it legends of human sacrifice and, ultimately, its haunted mountain, the Maudit.

Dutch writer Thomas Olde Heuvelt is a Hugo Award Winner and has been hailed as the future of speculative fiction in Europe. His work combines a unique blend of popular culture and fairy-tale myth that is utterly unique. Echo follows his sensational debut English language novel, HEX.”

Hello and welcome to damppebbles. Today I am delighted to share my review of Echo by Thomas Olde Heuvelt. Echo is published by Hodder & Stoughton today (that’s Thursday 3rd February 2022) and is available in hardcover, audio and digital formats. I chose to read and review a free eARC of Echo but that has in no way influenced my review.

One of the most memorable books I have ever read is HEX by Thomas Olde Heuvert. I remember the storyline and the characters so clearly, despite reading it six years ago, and I recommend it to everyone and anyone who is looking for a creepy, unsettling horror novel. So you can imagine my delight when I received an advanced copy of Echo, the latest book by Olde Heuvelt to be translated into English. So much so, my planned Christmas reading was pushed aside to make room for this superbly written chilling tale.

Nick Grevers, an experienced mountaineer, is lucky to be alive following an accident which saw the death of his climbing buddy, Augustin. Nick is in a bad way, wrapped in bandages, unable to communicate verbally and horribly disfigured. Nick’s boyfriend, Sam, is horrified by the news and despite his love for Nick, feels unsure about their future together. But when a terrorist attack is carried out on the hospital Nick is in, Sam realises that his life is with Nick. But Nick’s experience on the mountain went beyond the horror to his face, near death and losing his climbing partner…

I am a huge fan of books set in an inhospitable environment, particularly those set in a mountain range. I also love books where we humans have to fight for survival against nature and everything it throws at us. Which made Echo a perfect choice for me. Echo is a rich and vivid tale of love, loss and supernatural horror which I thoroughly enjoyed immersing myself in. Chilling, creepy and everything you want in a spooky read, this emotional tale drew this reader in from the incredibly eerie start to the devastating finale. Reading Echo truly was an experience and one I will remember for some time to come.

It took me a while to warm to Sam. His dialogue is written very much as he would speak –  ‘coulda’, ‘hadda’ – which took a little getting used to but before long, Sam’s dialogue felt very normal and very natural and I began to feel great affection for him. To the point where, by the end of the novel, I was sad to say goodbye. Nick intrigued me no end. I wanted to know what happened to him and Augustin on Maudit, and why. Nick’s take on things is provided via his manuscript which he sends to Sam whilst he’s away in the US. Throughout the novel sections of the manuscript are provided to the reader so the gaps can be filled. The truth is slowly, gradually revealed and it made for gripping reading. The love between Nick and Sam, despite the devastation caused by the accident, is what shone through the strongest for me. It almost broke me.

Would I recommend this book? I would, yes. Echo is a beautifully written, eerie tale of all-consuming love and heart wrenching loss. It is a slow burn of a novel which I savoured over the course of several sittings. It’s not a quick read but worth every single moment you spend within its pages. I loved the way the author builds up the suspense, increasing the tension as the story moves to its climax. Olde Heuvelt has once again crafted a novel that has wormed its way under my skin. One that will stay with me for some time to come. Recommended.

I chose to read and review a free eARC of Echo. The above review is my own unbiased opinion.

Echo by Thomas Olde Heuvelt (translated by Moshe Gilula) was published in the UK by Hodder & Stoughton on 3rd February 2022 and is available in hardcover, audio and digital formats (please note, the following links are affiliate links which means I receive a small percentage of the purchase price at no extra cost to you): | amazon.co.uk | Waterstones | Foyles | Book Depository | bookshop.org | Goodreads | damppebbles bookshop.org shop | 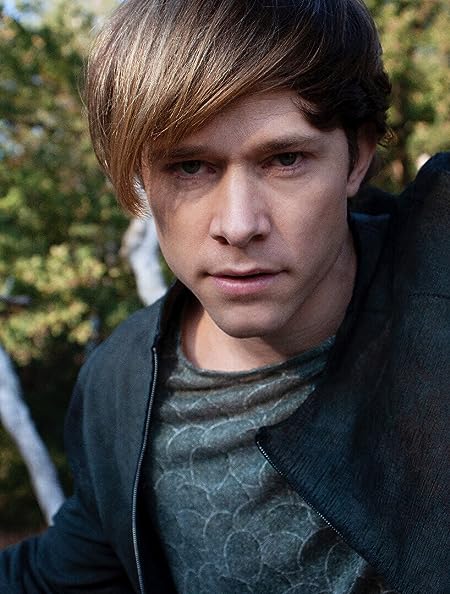 Dutch novelist Thomas Olde Heuvelt (1983) is the author of five novels and many short stories of the fantastic. His short fiction has appeared in English, Dutch and Chinese, among other languages. He won a 2015 Hugo Award for his novelette The Day the World Turned Upside Down. He has also been awarded the Harland Award for best Dutch fantasty on multiple occasions, and was nominated for the World Fantasy Award.

Olde Heuvelt wrote his debut novel at the age of sixteen. He studied English language and American literature in his hometown of Nijmegen and at the University of Ottawa in Canada. Since, he has become a bestselling author in The Netherlands and Belgium. He calls Roald Dahl and Stephen King the literary heroes of his childhood, creating a love for grim and dark fiction.

HEX is Olde Heuvelt’s world wide debut. Warner Bros is currently developing a TV series based on the book.