“In this explosive thriller of bad choices and dark crimes, Detective Levine knew his transfer was a punishment—but he had no idea just how bad it would get.

Cooper, Nebraska, is forgettable and forgotten, a town you’d only stumble into if you’d taken a seriously wrong turn. Like Detective Thomas Levine’s career has. But when a young woman is found lying in the snow, choked to death, her eyes gouged out, the disgraced detective is Cooper’s only hope for restoring peace and justice.

For Levine, still grieving and guilt-ridden over the death of his girlfriend, his so-called “transfer” from the big city to this grubby backwater has always felt like a punishment. And when his irascible new partner shoots their prime suspect using Levine’s gun, all hope of redemption is shattered. With the case in chaos, and both blackmail and a violent drug cartel to contend with, he finds himself in a world of trouble.

It gets worse. The real killer is still out there, and he’s got plans for Detective Levine. And Cooper may just be the perfect place to get away with murder.”

Hello and welcome to damppebbles. Today I am delighted to share my review of Welcome to Cooper by Tariq Ashkanani. Welcome to Cooper was published by Thomas & Mercer on 1st October 2021 and is available in paperback, audio and digital formats.

As soon as I laid eyes on this book I knew I had to read it. Small town American crime thrillers are 100% my thing and this one I was drawn to more than most! It was also recommended by BrendaP as part of my ’12 books in 12 months’ challenge (scroll down to see the other books on my list). I’ve had this book on my shelf since the end of last year and I’ve been champing at the bit to read it. So as soon as a break in my reading schedule arose it was a very easy, very clear choice for me.

Detective Thomas Levine has had to make a hasty retreat from his old posting in DC to the forgotten town of Cooper, Nebraska. His first case is a grisly one, a young woman strangled to death with her eyes gouged out and left to rot in the snow. Law enforcement in the town isn’t always by the book so it’s down to Levine to find the killer and put them away before another of his colleagues metes out their own special kind of justice to any suspicious locals. It’s a race against the clock before the killer strikes again. But Levine has his own issues to deal with as well. He’s still grieving the death of his girlfriend, he feels his relocation to Cooper is the worst kind of punishment and before long, his partner has double crossed him and holds Levine’s smoking gun in his hand. When one of the lead detectives is distracted, and no one else really cares, what’s to stop a deranged killer from striking again….?

Welcome to Cooper is an eminently readable, hugely compelling novel featuring a detective who is teetering on the edge. Surrounded by colleagues who don’t know right from wrong and hounded into carrying out less than legal endeavours, this fresh and original noir thriller ticked so many boxes for me. An unsettling somewhat bleak novel that was a dream to read. I tore through the pages at a rate of knots, eager to know how things would turn out for these deeply flawed characters. And because I was completely captivated by the story, I reached the shocking end of the book within 24 hours of starting. I could not put it down! And oh, that ending. An ending I certainly did not see coming and applaud whole heartedly. Wow!

Beautifully written, utterly absorbing and deftly plotted, this accomplished debut is a must read for crime fiction fans who like a darker edge to their reads. I thoroughly enjoyed the sub-plots which ran alongside the main murder mystery. Bad decision after bad decision led to a slippery slope from which there was no going back and it was tense and uncomfortable to watch things play out for Levine. Unflinching and dark, disturbing and desolate. Marvellous stuff!

Would I recommend this book? I would, yes. Welcome to Cooper took me on a dark and gritty ride to the heart of a small Nebraskan town and I loved it! What I enjoyed the most was the completely unexpected, almost earth shattering conclusion. I feel the author took a brave step and in my opinion, it fully paid off. Yes, he’s not the first to take this story down this avenue (and he won’t be the last) but the twist in Welcome to Cooper is done so well it will be impossible to forget. And I’ve read a lot of twists over the years! Great characters with few redeemable qualities, a setting which will easily send chills down your spine and plot to get really caught up in. Highly recommended.

Welcome to Cooper by Tariq Ashkanani was published in the UK by Thomas & Mercer on 1st October 2021 and is available in paperback, audio and digital formats (please note, the following links are affiliate links which means I receive a small percentage of the purchase price at no extra cost to you): | amazon.co.uk | Waterstones | Foyles | Book Depository | bookshop.org | Goodreads | damppebbles bookshop.org shop | 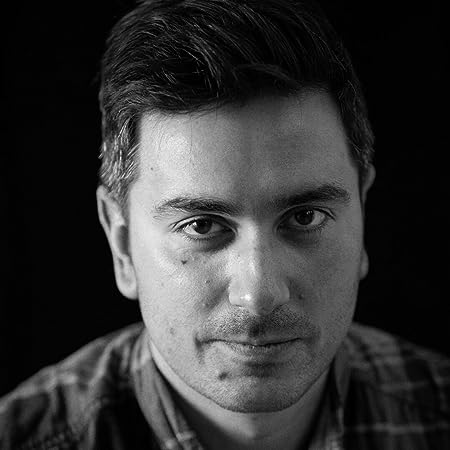 Tariq Ashkanani is a solicitor based in Edinburgh, where he also helps run Write Gear, a company that sells high-quality notebooks for writers, and co-hosts Write Gear’s podcast Page One. His follow-up thriller, Follow Me to the Edge, is out soon.

One thought on “#BookReview: Welcome to Cooper by Tariq Ashkanani @AmazonPub #WelcomeToCooper #damppebbles”