“Durton. Dirt town. Dirt and hurt – that’s what others would remember about our town . . .

When twelve-year-old Esther Bianchi disappears on her way home from school in the small town of Durton in rural Australia, the local community is thrown into a state of grief and suspicion.

As Detective Sergeant Sarah Michaels begins her investigation, she questions those who knew the girl, attempting to unpick the secrets which bind them together.

The girl’s mother, Constance, believes that her daughter going missing is the worst thing that can happen to her. But as the search for Esther develops, she learns that things can always get worse.

Ronnie is Esther’s best friend and is determined to bring her home. So when her classmate Lewis tells her that he saw Esther with a strange man at the creek the afternoon she went missing, Ronnie feels she is one step closer to finding her. But why is Lewis refusing to speak to the police?

And who else is keeping quiet about what happened to Esther?

Dirt Town by Hayley Scrivenor is an atmospheric crime novel set in rural Australia, for fans of Jane Harper’s The Dry and Chris Whitaker’s We Begin at the End.”

Hello and welcome to damppebbles. Today I am delighted to share my review of Dirt Town by Hayley Scrivenor. Dirt Town is published by Macmillan later this week (that’s Thursday 23rd June 2022) and will be available in hardcover, audio and digital formats with the paperback to follow. I chose to read and review a free eARC of Dirt Town but that has in no way influenced my review.

I am a HUGE fan of Australian crime fiction. I want to read it all, and there are lots of really exciting, interesting writers making their mark on the genre at the moment. So when I saw Scrivenor’s debut was being published, I jumped at the chance to read it. And oh my goodness, what a riveting, emotional ride it was. Definitely an author to watch!

Twelve-year-old Esther Bianchi and Ronnie Thompson are best friends. They live in Durton – or Dirt Town or Dirt and Hurt to the locals – which is a bit boring but OK. One day after school Esther goes missing. The whole town turns out to look for her but they’re all aware that their neighbour, their friend could have been the one to abduct the girl. Detective Sergeant Sarah Michaels is tasked with finding Esther but the investigation falters at every turn. Someone in Durton knows what’s happened to Esther. Someone in the small, close-knit community knows the truth…

Gorgeously dark, evocative and utterly compelling, I thoroughly enjoyed this superb slow burn mystery with its true to life characters, bleak setting and intriguing plot. I adored the voices the author gave the younger characters. They felt so true and real to me that my heart broke for these poor kids whose friend was missing. The emotion, the naivety was all conveyed so beautifully. The other character I adored was Detective Sergeant Sarah Michaels who is guilt-ridden following the end of her recent relationship. Her actions play on her mind constantly and I loved how that made the character more human. Sarah is very well-written and I do secretly hope that this is only the start for her and we get to see her feature in future books.

The plot is an intriguing slow burn of a read which I savoured every moment of. I didn’t feel the need to sprint my way through Dirt Town at all. I wanted to enjoy every word, every description of this dead end rural Australian town and savour the interactions between the characters as the mystery slowly but steadily unfurled. I wasn’t able to predict whodunit but it was a very satisfying, very surprising reveal.

Would I recommend this book? I would, yes. Dirt Town is a very atmospheric, incredibly readable tale which I enjoyed every dark and desolate moment of. The setting is exactly the kind of setting I want in my crime fiction novels – a small town on its last legs. I loved the vivid descriptions the author uses to set the scene, putting the reader right there in the middle of things. But the characters were EVERYTHING. Multi-layered, completely believable and totally unforgettable. It’s hard to believe Dirt Town is a debut and I’m excited to see what Scrivenor delivers next. Highly recommended.

I chose to read and review a free eARC of Dirt Town. The above review is my own unbiased opinion.

Dirt Town by Hayley Scrivenor was published in the UK by Macmillan on 23rd June 2022 and is available in hardcover, audio and digital formats (please note, the following links are affiliate links which means I receive a small percentage of the purchase price at no extra cost to you): | amazon.co.uk | Waterstones | Foyles | Book Depository | bookshop.org | Goodreads | damppebbles bookshop.org shop | 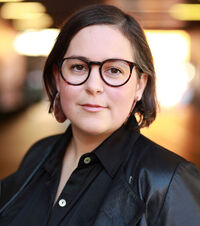 Hayley Scrivenor is a former Director of Wollongong Writers Festival. DIRT CREEK is her first novel (published as DIRT TOWN in Europe and Australia). An earlier version of the book was shortlisted for the Penguin Literary Prize and won The Kill Your Darlings Unpublished Manuscript Award. Originally from a small country town, Hayley now lives and writes on Dharawal country and has a PhD in creative writing from the University of Wollongong on the south coast of Australia.