“How do you find a killer who has destroyed all the evidence?

Detective Erika Foster is on a late-night walk near her new house in Blackheath when she stumbles upon the brutal murder of Vicky Clarke, a true-crime podcaster.

Erika is assigned to the case and discovers that Vicky had been working on a new podcast episode about a sexual predator who preys on young female students around South London, staking out his victims in their halls of residence before breaking in at the dead of night.

When Erika discovers that Vicky’s notes and sound recordings were stolen from her flat at the time of her murder, it leads her to believe that Vicky was close to unmasking the attacker, and she was killed to guarantee her silence.

The case takes on a disturbing twist when the body of a young Bulgarian student doctor is discovered in the same building, and this makes Erika question everything she thought she knew about Vicky. With very little evidence, the clock is ticking to find the killer before he strikes again.”

Hello and welcome to damppebbles. Today I am delighted to share my review of Fatal Witness by Robert Bryndza. Fatal Witness is the seventh book in the hugely popular Detective Erika Foster series and will be published in all formats by Raven Street Publishing later this week (that’s Thursday 7th July 2022). I chose to read and review a free ARC of Fatal Witness but that has in no way influenced my review. My grateful thanks to Robert for sending me a finished copy.

Erika Foster is back, baby! I have been a HUGE fan of Bryndza’s kick-ass detective since she first arrived on bookshelves back in 2016. In fact, The Girl in the Ice, book one in the series, was one of the first books I reviewed on damppebbles! So I feel Erika and I have some history. And since that first introduction, I have read and thoroughly enjoyed every single new title. So imagine my excitement when I heard the seventh book was set to be published 🤩. I could not WAIT to get my mitts on a copy of Fatal Witness!

DCI Erika Foster stumbles upon a grisly crime scene in her new neighbourhood, making her question her decision to move to Blackheath. The victim is true crime podcaster Vicky Clarke, whose body was discovered by her sister, Tess, only seconds before Erika’s arrival. Erika and her team are assigned the case, digging into Vicky’s life in an attempt to discover who wanted her dead. But the more they search, the more confusing the case becomes. There’s no motive, no evidence, and impossible as it seems, there are no records of what Vicky was working on. Could the murder be linked to one of her podcasts? Was Vicky getting close to revealing the identity of a serial sexual predator? And can Erika catch the killer before they strike again…?

The DCI Erika Foster series is by far one of my favourite police procedural series and I am so glad that the author has decided to write a seventh instalment. I’m keeping everything crossed that this is only the beginning and there are many more adventures to come for my favourite Slovakian DCI. I adore Erika. She’s a little bit of a b!tch (she’d be the first to admit that herself – in fact, I think she does in Fatal Witness!), she’s a little bit bossy, she’s a whole lot of kick-ass but oh my gosh, she gets the job done. To be reunited with her and the team felt like meeting up with old friends I haven’t seen in a while and I loved every single second. Erika is a strong, independent, determined woman but I felt the author added a level of vulnerability to her character in this book that we perhaps haven’t seen before. Still coming to terms with the events of the previous book, still grief stricken by the sudden and violent death of her husband before her transfer to London and having recently moved house, it’s clear to the reader that Erika Foster is a lonely woman. I really felt for her. That vulnerability made me like her even more (if that’s possible!). And fingers crossed, the future may be a smidge brighter. Possibly. Maybe. Who knows…?

The plot is compelling and draws the reader into the story from the prologue. There are, as I’ve come to expect from a Robert Bryndza novel, several fantastically placed and beautifully penned twists and turns along the way which keep the reader on their toes. I really enjoyed how flummoxed the team were at points in the story. With very few leads, a small number of possible culprits but no evidence to confirm their suspicions, they quickly run out of plausible, workable options. I was, of course, trying my darnedest to work out whodunit. (I’m a crime fiction fan, I’m sure we all do it!) However, as I approached the end of the book I could not for the life of me work out the who nor the why!

Would I recommend this book? I would, yes. If you’re a fan of well-written, cleverly plotted police procedurals then you need Fatal Witness, along with the first six books in the series, in your life. The entire series is an absolute ‘must read’ for crime fiction fans. All in all, a compelling, incredibly readable addition to a standout series which I hope continues for many more books to come. I’m still a little bit in love with Erika and I can’t see that changing any time soon. Great plot, fantastic characters, intensely atmospheric and impossible to put down. Highly recommended.

I chose to read and review a free ARC of Fatal Witness. The above review is my own unbiased opinion.

Fatal Witness by Robert Bryndza was published in the UK by Raven Street Publishing on 7th July 2022 and is available in hardcover, paperback, audio and digital formats (please note, the following links are affiliate links which means I receive a small percentage of the purchase price at no extra cost to you): | amazon.co.uk | Waterstones | Foyles | Book Depository | Goodreads | damppebbles bookshop.org shop | 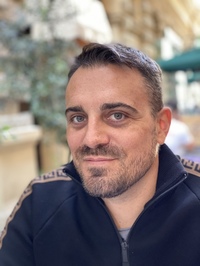 Robert Bryndza is an international bestselling author, best known for his page-turning crime and thriller novels, which have sold over five million copies.

His crime debut, The Girl in the Ice was released in February 2016, introducing Detective Chief Inspector Erika Foster. Within five months it sold one million copies, reaching number one in the Amazon UK, USA and Australian charts. To date, The Girl in the Ice has sold over 1.5 million copies in the English language and has been sold into translation in 29 countries. It was nominated for the Goodreads Choice Award for Mystery & Thriller (2016), the Grand prix des lectrices de Elle in France (2018), and it won two reader voted awards, The Thrillzone Awards best debut thriller in The Netherlands (2018) and The Dead Good Papercut Award for best page turner at the Harrogate Crime Festival (2016).

Robert has released a further five novels in the Erika Foster series, The Night Stalker, Dark Water, Last Breath, Cold Blood and Deadly Secrets, all of which have been global bestsellers, and in 2017 Last Breath was a Goodreads Choice Award nominee for Mystery and Thriller. Fatal Witness, the seventh Erika Foster novel, is now available to pre-order and will be published 7th July 2022.

Most recently, Robert created a new crime thriller series based around the central character Kate Marshall, a police officer turned private detective. The first book, Nine Elms, was an Amazon USA #1 bestseller and an Amazon UK top five bestseller, and the series has been sold into translation in 18 countries. The second book in the series is the global bestselling, Shadow Sands and the third book, Darkness Falls, has just been published.

Robert was born in Lowestoft, on the east coast of England. He studied at Aberystwyth University, and the Guildford School of Acting, and was an actor for several years, but didn’t find success until he took a play he’d written to the Edinburgh Festival. This led to the decision to change career and start writing. He self-published a bestselling series of romantic comedy novels, before switching to writing crime. Robert lives with his husband in Slovakia, and is lucky enough to write full-time.