In the early hours of Saturday 17 December 2011, Zoe Nolan, a nineteen-year-old Manchester University student, walked out of a party taking place in the shared accommodation where she had been living for three months.

She was never seen again.

Seven years after her disappearance, struggling writer Evelyn Mitchell finds herself drawn into the mystery. Through interviews with Zoe’s closest friends and family, she begins piecing together what really happened in 2011. But where some versions of events overlap, aligning perfectly with one another, others stand in stark contrast, giving rise to troubling inconsistencies.

Shaken by revelations of Zoe’s secret life, and stalked by a figure from the shadows, Evelyn turns to crime writer Joseph Knox to help make sense of a case where everyone has something to hide.

Zoe Nolan may be missing presumed dead, but her story is only just beginning”

Hello and welcome to damppebbles. Today I am delighted to share my review of True Crime Story by Joseph Knox. True Crime Story was published by Penguin on 17th March 2022 and is available in hardcover, paperback, audio and digital formats.

I have been wanting to read a book by Joseph Knox for a number of years now. I’ve heard only good things about his Aidan Waits novels, a gritty Manchester based thriller series which sounds just my cup of tea! But then True Crime Story hit the shelves and the book world (the book world I inhabit anyway!) went bonkers for it. So, to celebrate the opening of a brand-new shiny Waterstones near where I live, I decided to treat myself to a new book – I picked True Crime Story. Well, that was over a year ago now, but I finally managed to find a gap in my reading schedule to squeeze it in. And what a treat it was!

Zoe Nolan, new to Manchester University alongside her twin sister Kim, disappears one December evening in 2011 without a trace. Seven years later aspiring author Evelyn Mitchell decides to write a book about Zoe’s disappearance, turning to bestselling author Joseph Knox (yes, THAT Joseph Knox – the guy with his name on the cover!) for help and advice. Evelyn manages to interview most of Zoe’s friends and family, slowly piecing together the mystery surrounding Zoe’s disappearance. What she is told from those who knew Zoe best rings true. Their stories, their points of view are the same. But Evelyn can’t ignore the startling differences she also discovers. Will Evelyn, with the help of Joseph, be able to solve the mystery of Zoe’s disappearance before it’s too late…

In True Crime Story the author strives to give the reader the feeling that this is an actual true crime story. And he does. In spades. I finished reading this book several weeks ago and despite knowing this is 100% fiction, I still can’t shake the belief that it’s not in some way real. When I was a few chapters into the novel, I found myself googling Zoe Nolan, just in case someone by that name had ever gone missing. I’ve read other novels with a fictional true crime angle before but in my mind they’ve been just that, fictional. There was something about the way the author has written this story, perhaps immersing himself in the narrative in such a strong way, that totally worked for me. I know it’s not real but oh my gosh, it felt so true to life. The way the characters behave and act, their flaws and their idiosyncrasies, their relationships. I believed every single word.

The story is told using written and verbal transcripts collected by Evelyn Mitchell and sent to Joseph Knox for his thoughts, feelings and input. There are quite a few characters involved in the story – Zoe’s sister, her parents, her university friends, teaching staff and those investigating what happened in an official capacity. They all get to share their observations of Zoe (and each other!) in the lead up to the night of her disappearance. The book is presented in quite a different way that I can’t recall seeing before. There’s very little spoken dialogue as each character’s account is delivered to the reader as it was put to Evelyn. There’s no discussion, no sharing of ideas. She doesn’t ask questions or interrupt their memories. I know many readers don’t like a lot of dialogue between characters in their novels, that there can be a point where there’s too much and it detracts from the story, but I think I need that interaction. So much so that I did on occasion find myself drifting away from the story a little.

Would I recommend this book? I would, yes. If you enjoy well-written mysteries and you’re looking for something very different to the norm then True Crime Story is a must read. It’s a highly original, intelligent story delivered in such a way that it’s hard to forget. I would LOVE to listen to the audiobook version as I think that could be a slightly different experience, in a strange, inexplicable way. The author has done a masterful job in making his plot, his characters and the Manchester of the book totally believable, which I take my hat off to. I can only imagine the amount of work which went into plotting and planning Zoe’s story. What I do know for sure is that I am excited to read more by Knox and my copy of ‘Sirens’ will be moving to the top of the terrifying TBR as soon as possible. Recommended.

True Crime Story by Joseph Knox was published in the UK by Penguin Books on 17th March 2022 and is available in hardcover, paperback, audio and digital formats (please note, the following links are affiliate links which means I receive a small percentage of the purchase price at no extra cost to you): | amazon.co.uk | Waterstones | Foyles | Book Depository | bookshop.org | Goodreads | damppebbles bookshop.org shop | damppebbles amazon.co.uk shop | damppebbles amazon.com shop | 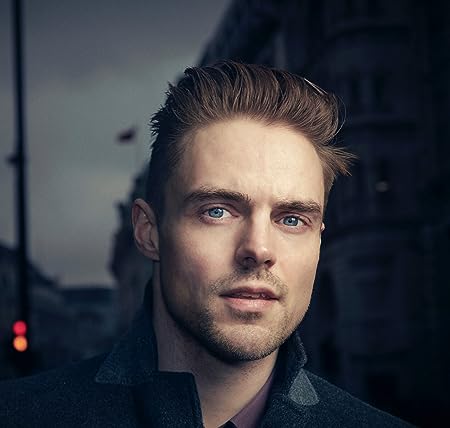 Joseph Knox was born and raised in and around Stoke-On-Trent and Manchester, where he worked in bars and bookshops before moving to London. He runs, writes and reads compulsively.

Sirens, his debut novel, was a Sunday Times bestseller, and his work has now been translated into 18 languages.

The Sleepwalker, his third novel, was released in July, 2019.