“Every year, on the same night, another girl disappears without a trace.

She left for work the morning of a terror attack in London, and no one’s seen her since. Was Olivia among the victims or did she meet a different fate?

Addie has a secret.

That same day, her dad came home covered in blood. Addie thought he’d been hurt in the attacks, but her sister Jessie found the missing woman’s purse in his room.

Jessie says she wants to help.

She takes a job as a nanny at Lex’s house, looking after his baby. But she’s not telling him the truth. And she’s getting a little too comfortable living Olivia’s life…”

Hello and welcome to damppebbles. Today I am delighted to share my review of The July Girls by Phoebe Locke. The July Girls was published by Wildfire Books on 25th June 2020 and is available in hardcover, paperback, audio and digital formats. I chose to read and review a free ARC of The July Girls but that has in no way influenced my review.

There was so much buzz around The July Girls when it was first published in hardcover back in 2019. I remember seeing a number of brilliant reviews from fellow bloggers, all encouraging me to read this book. So when I had a short break in my planned reading schedule I made a point of picking it up. And I’m so glad I did.

Ten-year-old Addie lives with her older sister, Jessie, and her dad in a rundown flat in Brixton. Life is tough. Their dad is never home and when he is, he’s usually in a foul mood. But Addie and Jessie have each other. The bond between the two sisters is strong, Addie worships her sibling. But Addie has a secret. On the same day terrorists detonated bombs across London their dad, Paul, came home covered in blood. She thought at first he’d been hurt in the attacks but other things don’t quite add up. Wracked with worry, she tells Jessie, and the girls search Paul’s room only to find a woman’s purse hidden away in a cubbyhole behind Paul’s bed. What happened to Olivia? Was she a victim of the 7/7 attacks? Or is she the latest victim of killer and serial abductor Magpie…?

The July Girls is a very readable, gritty tale of secrets and lies. I do enjoy the odd serial killer thriller but this is a completely different take on things, seen from a different angle and taken in a different direction which I enjoyed. Addie is a superb character who we meet for the first time days before her 10th birthday. Jessie promises an evening of pizza and ice cream which Addie is of course excited about, but then the 7/7 terrorist attacks hit London and everything changes. My heart broke for Addie as she wandered the streets of London alone, seeing the impact the bombs had on her community. During this time she’s unable to contact Jessie, she’s lost and alone, and her fear is palpable. These heart wrenching scenes really drew me into the story and connected me to the character. I so desperately wanted to help her, wrap her up in a hug and look after her.

I really enjoyed the way the author has written Addie’s character over the years, growing and changing as time marches on. Her behaviour, her emotions, her outlook and her dialogue all mature with her over a nine year period which I thought was very well done. What I loved most about this book though was that it wasn’t at all predictable. Everything about it felt spontaneous and surprising. The end reveal knocked me for six and I certainly did not see it coming!

Would I recommend this book? I would, yes. The July Girls is a gripping story full of menace and suspense which kept me reading all day long. I loved the originality of this novel, along with how unpredictable I found it. I thought the story was intricately plotted and beautifully considered. This is the first book by this author I have read but it certainly won’t be the last. I will definitely be making a point of purchasing the author’s debut thriller The Tall Man as I really connected with Locke’s writing style. All in all, an excellent thriller which I recommend.

I chose to read and review a free ARC of The July Girls. The above review is my own unbiased opinion.

The July Girls by Phoebe Locke was published in the UK by Wildfire Books on 25th June 2020 and is available in hardcover, paperback, audio and digital formats (please note, the following links are affiliate links which means I receive a small percentage of the purchase price at no extra cost to you): | amazon.co.uk | Waterstones | Foyles | Book Depository | bookshop.org | Goodreads | damppebbles bookshop.org shop | 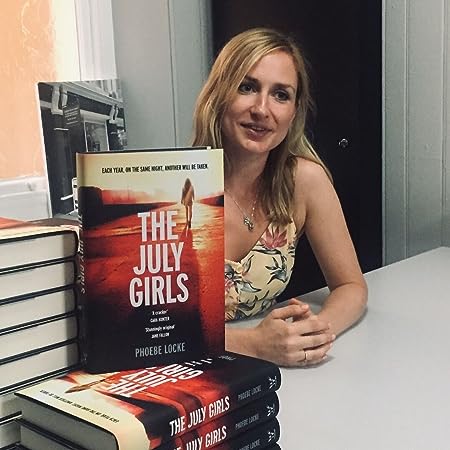 Phoebe Locke is a full-time writer, part-time doer of odd jobs. These jobs have included Christmas Elf, cocktail waitress, and childminder. Her first novel (written as Nicci Cloke), Someday Find Me, was published in 2012 and her second, Lay Me Down, in 2015. She has also written three novels for young adults: Follow Me Back (2016), Close Your Eyes (2017) and Toxic (2018).

She lives and writes in Cambridgeshire, and her debut psychological thriller is The Tall Man.