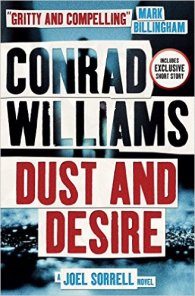 “AN EXTRAORDINARY KILLER HAS ARRIVED IN LONDON, HELL-BENT ON DESTRUCTION

Joel Sorrell, a bruised, bad-mouthed PI, is a sucker for missing person cases. And not just because he’s searching for his daughter, who vanished five years after his wife was murdered. Joel feels a kinship with the desperate and the damned. He feels, somehow, responsible. So when the mysterious Kara Geenan begs him to find her missing brother, Joel agrees. Then an attempt is made on his life, and Kara vanishes… A vicious serial killer is on the hunt, and as those close to Joel are sucked into his nightmare, he suspects that answers may lie in his own hellish past.”

I want to start this review by thanking my husband who (as part of my Christmas gift) gave me this book and introduced me to Joel Sorrell.  A million thank yous Ryan as I LOVED this novel.  You know me so well!

I was a little sceptical to begin with as I found out that Conrad Williams is known for his fantasy writing and the very last genre I will touch with a 10 foot barge pole is fantasy (sorry fantasy fans but that’s just the way it is).  However, Williams is a master of the written word so please accept my humble apologies for doubting you.

This is the first Joel Sorrell book of the series and wow, it’s started with a bang.  I believe this book was originally published with the title ‘Blonde on a Stick’.

Sorrell is a PI who trained as a police officer but decided he wasn’t cut out for the politics and red tape of the profession, deciding to go it alone like most other superheroes. Sorrell’s number one weapons are his wit and dark humour, which I found refreshing as it’s not often that you get the chance for a giggle while the bodies are being sliced up (having read that back it does sound a bit wrong, but you know what I mean….I hope!).

He answers a call for help from a woman trying to find her missing brother.  Nice and simple huh?  No, not really.  That’s when the bodies start piling up and the chase begins.

Gripping and full of action from the opening chapters to the end.  Life was pretty much put on hold whilst I read this book.  I couldn’t wait to find some quiet time and pick up from where I left off.

Very much looking forward to the next Joel Sorrell adventure.

2 thoughts on “Dust and Desire by Conrad Williams”