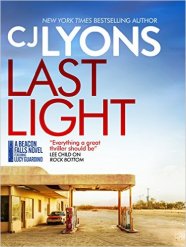 “1987: Lily Martin is horrifically murdered along with her young child in Texas.

Today: Life should be easy after leaving the FBI –  but not if you’re detective Lucy Guardino. Lucy has always seen herself as a normal mum who happened to have a job chasing the worst of the worst. But after a violent predator targets her family and she’s injured, Lucy sacrifices her career at the Bureau.

She joins the Beacon Group, a firm that specializes in cold cases. Lucy fears she’s traded the elite for shepherding a team of amateurs.

She is sent to rural Texas to investigate a case that’s already been closed with the killers behind bars for twenty-nine years.

But who really killed Lily Martin and her infant daughter? Why was an entire family targeted for annihilation? What price will Lucy pay when she fights to expose a truth people will kill to keep buried?”

What a fantastic concept and a great, great book.  This is book one in the Beacon Falls series but it brilliantly features one of CJ Lyons existing characters, Lucy Guardino.  Lucy was part of the FBI until her family were targeted and Lucy was badly injured.  So instead of (woe betide) retiring or killing her off, CJ Lyons has moved her away from the FBI to the slightly more relaxed Beacon Group investigating cold cases.

Lucy and her team are thrown in at the deep end on her first day in the office and asked to investigate the murder of a young family dating back to 1987.  Having never really travelled with the FBI she soon finds herself waving goodbye to her family and boarding a plane to Texas, with sulky colleague TK.  On arrival they meet David, the reason for their being in Texas and the son of one of the accused.  He believes whole heartedly that his father is guilty but his mother is dying and it’s her wish to have the case investigated one last time.

The murders were the biggest thing to happen to the small town so everyone who was alive then remembers what happened 29 years ago.  The Sheriffs Department and the deputies stand by their investigation – they sent two evil, murderous men to jail.  But that was then, this is now…could the two men accused of this terrible crime be innocent after all??

The characters make this book.  Lucy is fantastic but she’s a well established character so that came as no surprise.  TK got on my nerves to start with but I really warmed to her towards the end of the book.  She’s quite full of herself and arrogant but she’s an ex-Marine and I guess that’s how they are made.  Most of the other characters in the book really appealed to me (I won’t say which ones didn’t otherwise I could give the game away).

For a novel about solving a 29 year old cold case the plot was fast moving and engrossing.  I found this book hard to put down and heartily recommend it.  I better go and start downloading the first six books in the Lucy Guardino series!

Many thanks to Hayley at edpr, the team at Canelo and CJ Lyons for providing me with a copy of Last Light in exchange for an honest review.

Last Light by CJ Lyons was published in the UK by Canelo on 3rd May 2016 and is available in eBook format | amazon.co.uk | amazon.com