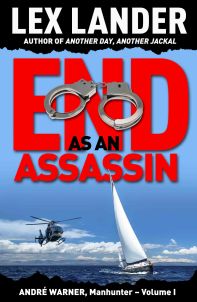 André Warner is a professional killer, ex-British Secret Service. Thirty-nine contracts have made him a wealthy man, and his fortieth is to be his last.

The hit goes smoothly enough, and the victim – a degenerate drug baron – is dispatched with minimal fuss and no traces left to incriminate Warner. He drives off into the sunrise to hang up his gun and retire to his home in Geneva.

Then into his life comes Gina, a hauntingly beautiful divorcee, fugitive from a bad marriage. The timing is perfect, coinciding as it does with Warner’s new beginning. They soon become lovers, and all seems set fair for a life together.

Their idyll is shattered when a former associate turns against Warner, and he faces exposure and arrest. Accompanied by Gina, he flees his Geneva home, only to run from the clutches of the Swiss police into the far deadlier embrace of a Marseilles crime syndicate whose boss has a score to settle on behalf of Warner’s last victim. Suddenly Gina is at risk through her association with him, and in trying to protect her he only makes matters worse.

His retirement plans in shreds, his life on the line, Warner is forced to stage a comeback. Only this time it’s not for money. It’s for blood, pure and simple.”

Today is my stop on the End As An Assassin blog tour and I am delighted to share a guest post by Lex Lander with you.  André Warner, the lead in End As An Assassin, is a dashing international gun for hire.  For those that don’t know, I love books with an international feel about them and with that love comes a love of language.  My pitiful attempts to learn German pale into insignificance when it comes to Lex’s experiences though.

Foreign languages and the origins of words have always held a fascination for me. Living in France for 12 years, until the age of 16, I grew up bi-lingual English-French.  I took a degree at Auckland (NZ) University, starting in French, Italian, Spanish, and German.  Learning 4 languages simultaneously became  too stressful, so I dropped Spanish (a mistake!) and German.  After transferring to Exeter University to complete my degree course, I confined it to French and Italian. Later, during a 4 year stint in France running my father’s property business, I re-learned Spanish ‘on the job’ and ended up fluent in that language, minus the degree.

My French is of course essential in Montreal, where most of the populace are Francophone first, although many have a good grasp of English. My 12 years living in France have proved in valuable in equipping me with the  bi-lingual skills that are so useful to me today.

This is a gripping thrill of a read with unexpected twists and shed loads of action.  If you like your thrillers with a James Bond-esque lead character then you will love End As An Assassin.  André Warner is smooth, debonair and deadly.  There were times I liked him and times I didn’t.  He’s a killer with a conscience and a code of practice.

I loved the international feel of this book.  The flitting from one country to another was fascinating and kept my interest.  There were times when I was sat on the edge of my seat, wondering how André was going to get out of a predicament in one living, walking, talking piece.

When we first meet Gina she is frosty, feisty and self assured and I preferred her this way, liking her less as she fell for André.  Their relationship was very full on and a little on the intense side for my liking but I can see exactly why the author wrote the couple that way.

A very enjoyable read for those that enjoy hard and fast thrillers.  Nice to have an anti-hero as the lead rather than a ‘For Queen and Country’ spy.  I look forward to the next book in the Manhunter series.

I received an ARC of this book in exchange for an honest review.

End As An Assassin by Lex Lander was published in the UK by Kaybec Publishing on 1st May 2016 and is available in eBook format | amazon.co.uk | amazon.com |

LEX LANDER is a British born writer of crime thrillers, living and working in Montreal. Despite heavy business commitments – he is a partner in a Property Realtor business – he is currently finding time to produce two novels per annum. Lander is also the author of political thriller ANOTHER DAY, ANOTHER JACKAL, published by Kaybec in 2013.