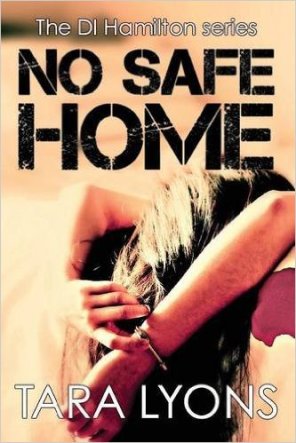 “Detective Inspector Denis Hamilton is haunted when the suspicious death of a teenage girl triggers suppressed memories. With a stalker targeting vulnerable women in Central London, and his team rapidly diminishing, Hamilton must conquer his emotions before another family is destroyed.

In a sleepy town in Hertfordshire, Katy has worked hard to rebuild her life after leaving behind everything she knew. But when her past catches up with her, and her young son’s life is threatened, Katy must admit her true identity if she has any hope of surviving.

A home should be a safe place, shouldn’t it?

But sometimes it is hard to know who you can trust…“

I am absolutely delighted to welcome you to my stop on the No Safe Home blog tour.  I have been waiting for the release of this book for some time now, ever since I read Tara Lyon’s brilliant debut solo novel In the Shadows last year.  In the Shadows was so good that it made it onto my top reads of 2016 list.  A brilliant, twisty story with one of the most appealing fictional detectives I have met in a long time.  And he’s back!  This is book two in the DI Denis Hamilton series and oh my gosh, it’s a corker!

DI Hamilton and his team become involved in two brutal cases.  The first, a young teenager who has apparently committed suicide in her bedroom.  Her parents don’t believe for one moment that it’s suicide – they know their daughter was murdered.  DI Hamilton’s reaction to the case is strange…unexpected and he hastily makes a retreat leaving the case in the capable yet nervy hands of DS Kerry Fraser.  The second case involves the murder of a woman and her young son, left to decompose for weeks before being discovered. Meanwhile, Katy Royal is hiding something.  She’s upped sticks and moved from the busy, bustling city to a leafy Hertfordshire town.  She’s incognito and plans to do absolutely everything she can to stay that way.  Even if it means her young son has to spend the majority of his time tucked away in their flat.  But someone is watching and wanting Katy all for himself, and they will stop at nothing to find her.  But is he the only one?  And, most importantly, is he the most dangerous?

I absolutely loved this book.  I couldn’t wait to be reacquainted with the grumpy yet lovable DI.  I felt whilst reading In the Shadows that DI Denis Hamilton was one of the main characters but he wasn’t THE main character.  I found the man intriguing and I wanted to know more.  And that is exactly what Tara Lyons has done, she’s given us a whole lot more Denis. No Safe Home provides us with DI Hamilton’s tragic backstory, we get to meet his long suffering wife and see snippets of their marriage and the after effects of their loss.  He’s a lot nicer than the majority of detectives I like to read about so maybe I’m mellowing with age!

The prologue is both shocking and terrifying.  After reading it, I put my Kindle down, got out of bed and went to check on my sleeping children.  It’s not often that a book has that kind of affect on me!  From that point on I was hooked.  Katy makes you instantly suspicious and you want to know exactly what she is running away from.  What has she left behind in London and why?  As the story progressed I began to feel a real warmth and lots of sympathy for Katy; after all, she’s just a young single mum trying to do what’s best for her son.

Whilst reading the closing chapters I suddenly realised that I was holding my breath!  The plot moves at a swift, exciting pace making the book hard to put down.  Although this is the second book in the series I think it could easily be read as standalone as there is little to no mention of the previous case undertaken by Denis and his team.  I can’t quite put my finger on it but something about this book, compared to Tara’s previous solo release, felt different.  The writing style felt more self assured, more knowledgeable…dare I say, more mature?

Would I recommend this book?  Most definitely.  It’s a thoroughly enjoyable read and I can’t wait for more DI Denis Hamilton.  I can’t remember the last time I felt so much fear whilst reading…I thought reading was supposed to be relaxing!  Gripping plot, great storytelling and relatable characters.

I chose to read and review an eARC of No Safe Home.  My thanks to Bloodhound Books for providing me with a copy and asking me to be a part of the blog tour.  The above review is my own unbiased opinion. 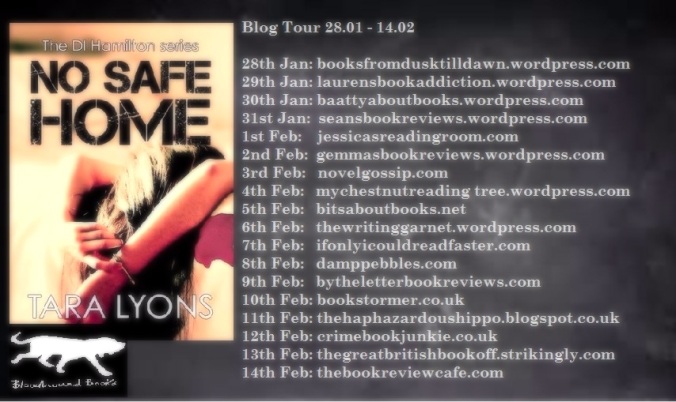 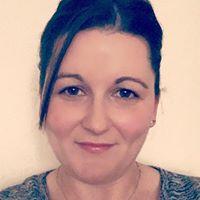 Tara is a crime/psychological thriller author from London, UK. Turning 30 in 2015 propelled her to fulfil her lifelong dream of becoming a writer. She studied English Literature at Brunel University and was Assistant Editor at an in-house magazine for 8 years,

In the Shadows is the author’s solo debut novel published in March 2016. She has also co-written with New York Times bestselling author, M.A Comley – The Caller and Web of Deceit.

When she’s not writing, Tara can be found at a local Wacky Warehouse stuck in the ball-pit with her young, energetic son.