Flipping heck, did anyone see where February went?  I know it’s a short month but that was taking the mickey a little!  Happy March everyone.  I’m already feeling the pressure with my monthly Case Closed posts. Started hyperventilating when I realised that I won’t have space in the damppebbles schedule until the 4th March (surely that’s too late for a summary post, isn’t it?).

I had hoped to find time to write this post yesterday and I was going to say how Spring is very obviously on it’s way here in the UK as the sun was shining and there was a feeling of change in the air.  But I ran out of time, so here I sit today staring out at the dull, grey cloud-filled sky waiting for the next downpour to hit and hoping it won’t be at school pickup time!  Oh, and I have the heating on again today as it’s freezing.  Good ol’ blighty, eh?

So what happened at damppebbles HQ in February?  Well, not a lot if I’m honest.  I read the grant total of SIX books (yes, you read that correctly…six books).  Now, I’m not a fast reader but even for me that’s appalling!  My reading mojo may be making a quick break for the door which is a bit of a shame seeing as I have a diary full of blog tours this month.

Of these five were reviews:
| A Deadly Thaw by Sarah Ward | No Safe Home by Tara Lyons | City of Good Death by Chris Lloyd | Blink by K.L. Slater | Cursed by Thomas Enger |

I also (amazingly, when you note how few books I read last month) managed to squeeze in a couple of non-blog tour reviews too!   Here they are:

| Her Every Fear by Peter Swanson | Kill The Next One by Federico Axat | The Murder Farm by Andrea Maria Schenkel | The Book of Mirrors by E.O. Chirovici |

There was one more book which I haven’t mentioned above as I didn’t feel I could review it positively and therefore didn’t want to include in on the blog (it’s also to blame for my not reading very much this month as it took me two weeks from start to finish!).  I have reviewed it on Goodreads though.

And of course, how could I forget the post that gave my husband a big head.  My the gift that keeps on giving post where you lovely lot said lovely things about my lovely husband and his cracking taste in books.  This is his choice for March: 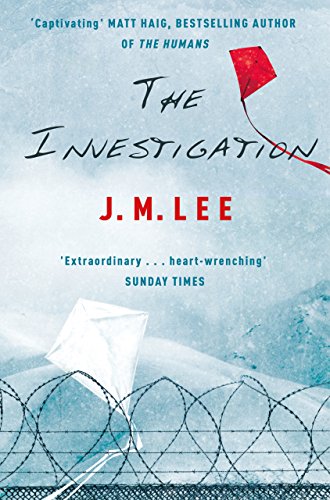 Fukuoka Prison, 1944. Beyond the prison walls the war rages; inside a man is found brutally murdered.

Yuichi Watanabe, a young guard with a passion for reading, is ordered to investigate. The victim, Sugiyama – also a guard – was feared and despised throughout the prison and inquiries have barely begun when a powerful inmate confesses. But Watanabe is unconvinced; and as he interrogates both the suspect and Yun Dong-ju, a talented Korean poet, he begins to realise that the fearsome guard was not all he appeared to be . . .

As Watanabe unravels Sugiyama’s final months, he begins to discover what is really going on inside this dark and violent institution, which few inmates survive: a man who will stop at nothing to dig his way to freedom; a governor whose greed knows no limits; a little girl whose kite finds her an unlikely friend. And Yun Dong-ju – the poet whose works hold such beauty they can break the hardest of hearts.

As the war moves towards its devastating close and bombs rain down upon the prison, Watanabe realises that he must find a way to protect Yun Dong-ju, no matter what it takes. This decision will lead the young guard back to the investigation – where he will discover a devastating truth . . .

At once a captivating mystery and an epic lament for lost freedom and humanity in the darkest of times, The Investigation – inspired by a true story – is a sweeping, gripping tale perfect for fans of The Shadow of the Wind.

Has anyone read it?  He’s running out of choice with regards to Japanese crime fiction (I’m sure there are thousands but they’ve not been translated!) so he’s moved onto Korean crime fiction.

Speaking of which (in a roundabout way), I’m currently looking for guest reviewers and bloggers to help reduce my #terrifyingTBR. If you or someone you know would be interested in reading one of my books and then writing a cracking review, then please be in touch (Facebook, Twitter or email).

To encourage me to read the books at the bottom of the #terrifyingTBR I’ve decided to set myself a number of monthly goals.  Goal no.1: The first one is to read at least nine books a month, otherwise all other goals fail before I’ve even started.  Goal no. 2: Each month I will read the one book which has been on my NetGalley shelf the longest (or the two books if I don’t have many blog tours (ha!)).  Goal no. 3: I will endeavour to read at least one of the books my husband has given me over the last year and a bit.  Goal no. 4: There was a goal no. 4 but I’ve deleted it and banished it from my mind (it was ‘no more books’, if you’re wondering!!).

So there we have it.  Goodbye February 2017, it was brief…and a bit cold.  Hello March, please be warmer and bring me lots of time to read (and some cracking books too…yah boo sucks to you, Goal no. 4!).