“Out-of-work actress Derry O’Donnell is young, talented, a teeny bit psychic … and broke. Spurred on by an ultimatum from her awesomely high-achieving mother, and with a little help from her theatrical friends, Derry embarks on a part-time career as Madam Tulip, fortune-teller to the rich and famous.But at her first fortune-telling gig – a celebrity charity weekend in a castle – a famous rap artist will die.

As Derry is drawn deeper into a seedy world of celebrities, supermodels and millionaires, she finds herself playing the most dangerous role of her acting life.Trapped in a maze of intrigue, money and drugs, Derry’s attempts at amateur detective could soon destroy her friends, her ex-lover, her father and herself.

Madame Tulip is the first in a series of Tulip adventures in which Derry O’Donnell, celebrity fortune-teller and reluctant detective, plays the most exciting and perilous roles of her acting life, drinks borage tea, and fails to understand her parents.”

Hello booky people and welcome to another of my rather wonderful guest review posts. Today I am thrilled to welcome the lovely Nicki to damppebbles.  Nicki blogs over at Nicki’s Book Blog.  She’s a pretty voracious reader so there’s always something new on her blog.  You can also catch her reviews on Goodreads. 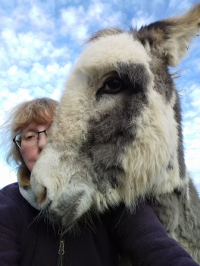 Hi, I read around 20+ books a month of mixed genres, my favourite being psychological thrillers. I have reviewed for just over 2 years and put all books on my blog- https://www.facebook.com/nickisbookblog/?ref=bookmarks.

My other hobbies include a range of animals and rescuing disabled hens (hence my Amazon and Goodreads name of Misfits farm), beekeeping, running, baking and riding. I love the outdoors but also love nothing more than to tuck up with a coffee and a good book.

And here are Nicki’s thoughts on Madam Tulip by David Ahern:

Derry O’Donnell is the daughter of the seventh son of a seventh son and therefore has “the gift”, at least that’s what her father tells her. She is skint, as is he and they need to make some money pronto. She is an aspiring actress and has read cards before. Madam Tulip becomes her “mystic” being and she accepts an engagement to a party to tell fortunes as part of the entertainment. Whilst there a famous singer is discovered dead. What transpires is Derry trying to accept what she has “seen” and that there could be another plot afoot. A lighthearted entertaining easy read. I love the characters especially Derry and the descriptions are excellent. You could picture this happening in a different era although it is set in modern times. A lovely comfortable read.

I voluntarily chose to read this ARC and all opinions in this review are my own and completely unbiased.

Thank you very much for reading and reviewing Madam Tulip for damppebbles, Nicki.

Madam Tulip by David Ahern was published in the UK by Malin Press on 3rd April 2016 and is available in paperback and eBook formats | amazon.co.uk | amazon.com | Waterstones | Goodreads | 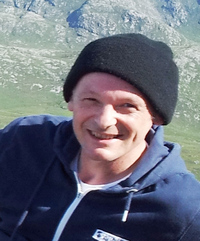 David Ahern grew up in a theatrical family in Ireland but ran away to Scotland to become a research psychologist and sensible person. He earned his doctorate and taught in major Universities but could never explain to his granny why he didn’t own a stethoscope.

Finding the challenge of pretending to know things exhausting, David Ahern shaved off his beard and absconded once more, this time to work in television. He became a writer, director and producer, creating international documentary series and winning numerous awards, none of which got him free into nightclubs.

For no particular reason, David Ahern took to writing fiction. Madame Tulip wasn’t his first novel, but writing it was the most fun he’d ever had with a computer. The second in the Madam Tulip mystery series, Madam Tulip and the Knave of Hearts, was published in autumn 2016. He is now writing the third Madam Tulip adventure and enjoys pretending this is actual work.

David Ahern lives in the beautiful West of Ireland with his wife, two cats and a vegetable garden of which he is inordinately proud.