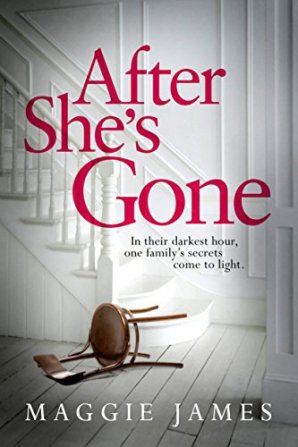 “Lori Golden’s family have had more than their fair share of troubles. But through it all, Lori and her sister, Jessie, have always supported each other. Then Jessie is killed. And Lori’s world turns upside down.

Devastated, Lori struggles to cope with her loss, and to learn to live in a world without her bright, bubbly sister by her side. Around her, her already fractured family start to fall apart. And, as Lori and her mother try to pick up the pieces of their shattered lives, secrets long thought buried are coming painfully to light.

Faced with the unthinkable, Lori is forced to ask herself how well she really knows those who are left behind…”

So I guess the most important question is, did I enjoy my first experience of a Maggie James novel?  I most certainly did.  I found Maggie’s writing style very easy to read which meant that I breezed through After She’s Gone in two short days (that’s quick for me).  I found her characters interesting, particularly Lori Golden who I instantly warmed to.  Saying that, at times I did find Lori a little too naive which was frustrating, but then I’m a die-hard crime fan and tend to read the very worst of people which makes me overly suspicious of everyone!  I went through different emotions when it came to Dana Golden, Lori’s mother.  At times I really liked her, felt for her with her ongoing treatment for kidney failure.  At other times I’m afraid I despised the woman.

I found the sections about becoming a living donor very interesting and found this particular sub-plot really held my attention.  So much so that I was able to have a conversation with a lady at my son’s preschool who is considering becoming a living donor for her sister.  The investigation into Jessie’s death was also very compelling reading, but I’m afraid I worked out who the killer was quite early on. This tends to happen to me sometimes but it rarely spoils the story.  It just proves what an ace detective I’m becoming after all this time (ha!).  It certainly didn’t spoil the story for me on this occasion.  The author does a stellar job of trying to wrong foot you and made me question my decision at several turns along the way.

Would I recommend this book?  I would.  I found After She’s Gone a compelling read and I wouldn’t hesitate to read another book by Maggie James.  In fact, I have added Blackwater Lake to my #terrifyingTBR and I’m looking forward to it.  Interesting plot, strong characters and tons of suspense.

Three and a half out of five stars.

I chose to read and review an eARC of After She’s Gone. The above review is my own unbiased opinion.

After She’s Gone by Maggie James was published in the UK by Lake Union Publishing on 16th March 2017 and is available in paperback, eBook and audio formats | amazon.co.uk | amazon.com | Waterstones | Goodreads |

Maggie James is a British author who lives in Bristol. She writes psychological suspense novels.

Before turning her hand to writing, Maggie worked mainly as an accountant, with a diversion into practising as a nutritional therapist. Diet and health remain high on her list of interests, along with travel. Accountancy does not, but then it never did. The urge to pack a bag and go off travelling is always lurking in the background! When not writing, going to the gym, practising yoga or travelling, Maggie can be found seeking new four-legged friends to pet; animals are a lifelong love! 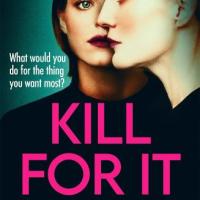