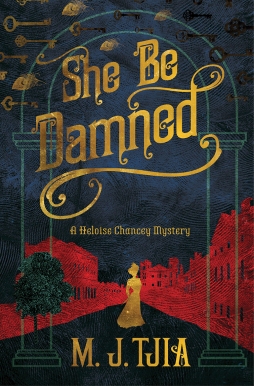 “London, 1863: prostitutes in the Waterloo area are turning up dead, their sexual organs mutilated and removed. When another girl goes missing, fears grow that the killer may have claimed their latest victim.

The police are at a loss and so it falls to courtesan and professional detective, Heloise Chancey, to investigate.

With the assistance of her trusty Chinese maid, Amah Li Leen, Heloise inches closer to the truth. But when Amah is implicated in the brutal plot, Heloise must reconsider who she can trust, before the killer strikes again.”

I am delighted to welcome you to my stop on the She Be Damned blog tour.  She Be Damned is the first of the Heloise Chancey Mysteries, is written by M.J. Tjia and was published by Legend Press on 1st August 2017.

To celebrate this new release I have an intriguing extract in the form of the first chapter to share with you today.  I hope you enjoy it as much as I did.

I hope that’s piqued your interest.  Mrs Heloise Chancey doesn’t sound like a lady to be messed with, does she?  And I absolutely love that cover.  This one will definitely be added to the TBR.

She Be Damned: A Heloise Chancey Mystery by M.J. Tjia was published in the UK by Legend Press on 1st August 2017 and is available in paperback and eBook formats | amazon.co.uk | amazon.com | Waterstones | Goodreads |