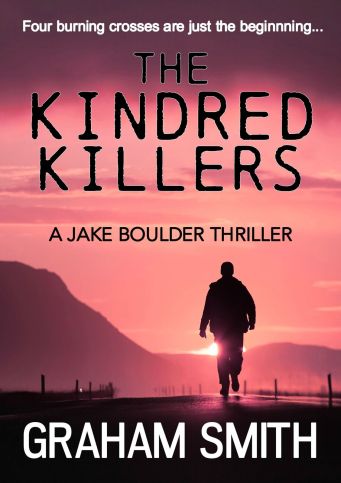 “Jake Boulder’s help is requested by his best friend, Alfonse, when his cousin is crucified and burned alive along with his wife and children.

As Boulder tries to track the heinous killer, a young woman is abducted. Soon her body is discovered and Boulder realises both murders have something unusual in common.

With virtually no leads for Boulder to follow, he strives to find a way to get a clue as to the killer’s identity. But is he hunting for one killer or more?

After a young couple are snatched in the middle of the night the case takes a brutal turn. When the FBI is invited to help with the case, Boulder finds himself warned off the investigation.

When gruesome, and incendiary, footage from a mobile phone is sent to all the major US News outlets and the pressure to find those responsible for the crimes mounts. But with the authorities against him can Boulder catch the killer before it’s too late?”

I am delighted to welcome you to my stop on The Kindred Killers blog tour which I share with my #blogbestie, the lovely Joanne at My Chestnut Reading Tree.  If you haven’t visited My Chestnut Reading Tree before, then do.  Joanne is such a lovely person and her blog is one of my very favourites, plus she LOVES books.  What more could you ask for?

The Kindred Killers is the second book in the explosive and thrilling Jake Boulder series and is written by author, Graham Smith.  I thoroughly enjoyed Watching the Bodies, the first book in this brilliant series so was looking forward to making a start on The Kindred Killers.  You can read my review of book one by clicking here.

There’s *something* about this series.  Something the author has managed to capture which keeps the reader coming back for more.  I, for one, love it and will always make a special effort to keep up with Boulder’s adventures.  For me, it may be that the books are so wonderfully American.  Regular visitors to the blog will know that I have a bit of a ‘thing’ for American crime.  Or, it may just be that they are cracking crime stories about a hard as nails part-time crime fighter in the shape of Utah doorman, Jake Boulder.

This time Jake’s best friend and occasional employer, Alfonse is in need of Boulder’s investigative skills.  Alfonse and Jake make a formidable team with Jake’s ability to sniff out a lead and Alfonse’s high-tech hacking talent.  Alfonse’s cousin, Darryl and his family have gone missing.  Boulder knows instantly that this was not a voluntary retreat as there are signs of a struggle.  The incompetent Lieutenant Farrage and his hapless bunch of detectives have dismissed the scene and intend to do as little as possible.  Thankfully, Boulder is on the case.  But when Chief Watson calls Boulder to Ashley National Forest, Boulder quickly becomes aware that time has run out for Darryl and his young family. Reeling from his recent run in with a twisted serial killer, it looks like Boulder will have to stare evil in the face once again.  Four burning crosses suspended from a tree, four smouldering corpses nailed to them…

I do like a little bit of blood and gore in my reads and Smith has excelled himself with a number of brutal murder scenes in this latest instalment.  Maybe that’s the reason I enjoy these books so much!  Smith is quite prepared to break down boundaries and kill off his victims with some stomach-churning methods.  Would other authors be prepared to be as graphic?  I’m not sure….and I flipping love it!  I don’t want to put any squeamish readers off though.  If you’ve ever watched GoT or Breaking Bad then I’m sure you’ve seen worse scenes played out on your television screen!

I was glad to see the incredibly irritating Lieutenant Farrage playing a very small role in proceedings; being replaced by the more competent, more likeable Chief Watson.  I would be very happy to see the end of Farrage for good and a lot more of Watson in future books.  The other character I would like to see a lot more of is Boulder’s mother. She added a wonderful dose of humour to the first book which I was hoping to see again, but she only made one or two very brief appearances – mostly nagging her son!

The conclusion of this book blew me away!  One of the smaller, yet fairly regular characters in the books plays a rather shocking role.  I had never really warmed to this character while reading the first book, or this second novel.  In fact, I thought them to be quite insubstantial.  There are, however, several paragraphs in the build up to the explosive finale which made me completely change my mind about them.  I went from thinking ‘pah’ to thinking ‘woah’ (that’s the word I actually wrote in my notes, WOAH!).

Would I recommend this book? Yes, without doubt.  It’s fast paced, thrilling and you can’t help but like Boulder.  So good, so unexpected, Smith knows how to keep his readers on the edge of their seats.  I thoroughly enjoyed The Kindred Killers and heartily recommend this book (this series, really!).  If you enjoy the odd serial killer thriller then you must, MUST make sure you get a copy.

I chose to read and review an eARC of The Kindred Killers.  The above review is my own unbiased opinion.  My thanks to Sarah Hardy and Graham Smith for asking me to feature on the blog tour.

The Kindred Killers by Graham Smith was published in the UK by Bloodhound Books on 12th September 2017 and is available in paperback and eBook formats | amazon.co.uk | amazon.com | Waterstones | Goodreads |

A time served joiner Graham has built bridges, houses, dug drains and slated roofs to make ends meet. Since Christmas 2000 he has been the manager of a busy hotel and wedding venue near Gretna Green, Scotland.

He is the author of four books featuring DI Harry Evans and the Cumbrian Major Crimes Team and now two books in the crime series featuring Utah doorman, Jake Boulder.