“Devoted father or merciless killer?
His secrets are buried with him.

Florence Lovelady’s career was made when she convicted coffin-maker Larry Glassbrook of a series of child murders 30 years ago. Like something from our worst nightmares the victims were buried…ALIVE.

Larry confessed to the crimes; it was an open and shut case. But now he’s dead, and events from the past start to repeat themselves.

Did she get it wrong all those years ago?
Or is there something much darker at play?”

It is my great pleasure to welcome you to the blog today and to my stop on The Craftsman blog tour.  Now some of you may be experiencing a spot of deja vu here but fret not, you’re not seeing double.  Yes, I have published my review for the EPIC The Craftsman before but that was to celebrate the release of the book in hardcover.  Now we’re back, still celebrating, but this time it’s for the paperback release.  New cover, same book, still an absolute MUST READ.

So without further ado, here (for the second time) is my review of one of my favourite reads of 2018 (it’s long, so make yourself comfy)…

Regular visitors to the blog will know that I have a bit of a ‘thing’ for crime/horror crossover novels, which this most definitely is.  Thanks to social media I saw this book sent to a few lucky early readers at the start of the year and I kid you not, it arrived in its own flipping grave!  How incredible is that?!  I knew there and then that I had to read The Craftsman.  I was pretty much prepared to do ANYTHING to get my hands on a copy (including waiting very calmly and patiently for it to be published!).  So when I was asked to feature on the blog tour, there was no way on this earth that I could say no.

Strangely, and I still can’t quite believe it myself, this is the first book I have read by Sharon Bolton.  I have a copy of Bolton’s Dead Woman Walking on my TBR which I really must get around to.  I loved The Craftsman.  I was immediately drawn into a story that I could not pull myself away from.  Our main character, WPC Florence Lovelady, had my full attention from start to finish and I’m left wanting more.  What an intriguing, fascinating story and one that will stay with me for some time to come.

The book opens with a funeral.  A funeral with a difference as the mourners aren’t there to mourn, they want to prove to themselves that it’s true; Larry Glassbrook is finally dead.  Florence Lovelady, who was heavily involved in the hunt for Glassbrook after he murdered three local teenagers by burying them alive and was key to discovering Glassbrook’s identity, has returned to Sabden in Lancashire to attend the funeral.  Lovelady has been in regular communication with the convicted killer since he was imprisoned.  Glassbrook’s final message, delivered via a short cryptic message, makes Florence wonder whether the arrest, the horrors she experienced all those years ago back in the late sixties, were the doing of Larry Glassbrook or someone much more sinister…

I enjoyed many of the characters in The Craftsman.  But for me, it was ALL about the tough, plucky WPC Florence Lovelady.  It’s the late 1960s and Florence is the first woman to work for the Sabden Police Force.  She’s ‘just a young girl’ in their eyes so is consigned to tea making and typing duties, but she outshines every single other character in the book!  Florence is smart, gutsy and tenacious and tends to run rings around her male colleagues, even when she’s trying not to!  While the men are busy being misogynists, Florence is suggesting filming a re-enactment of the latest victim’s last movements.  While the men are twiddling their thumbs, Florence is creating charts and looking for patterns, searching for the elusive clue to break the case.  Unfortunately, her intelligence, her keen eye and her repeated bouts of good luck put her somewhere she doesn’t want to be.  In the spotlight as one of the main suspects.

Now, this isn’t your everyday serial killer novel.  Nor is it your traditional police procedural.  It may not be everyone’s cup of tea because, at the heart of this story, there be witches.  Sabden, where the story is set, is at the foot of Pendle Hill which has a long history of witches and witch trials.  I thoroughly enjoyed the way the author has taken this long, dark history and used it to grow her character’s experience.  In essence, Florence becomes the focus of a cruel local witch hunt just because she’s more intelligent than her colleagues, more determined, more proactive,…and not a man.

There is so much more I want to tell you about this book.  I could go on for hours telling you about another favourite couple of characters; Daphne and Avril, and the wonderful sparkle they exude.  Oh, and I could tell you how much I enjoyed the main body of the story where the reader is transported to the late sixties (and how I couldn’t help but picture the odd scene from ‘Life on Mars’, the television programme).  This is where you get to meet some of the most misogynistic characters I have ever had the displeasure of encountering in a book.  I wanted to thump most of them.  Thank goodness times have changed!  But if I do continue telling you everything I loved then this will be the longest review I have ever written.  So instead, buy the book and find out the wonders of The Craftsman for yourself.

Would I recommend this book?  Most definitely.  It’s creepy, it’s tense and it’s full of witches!  Plus, I don’t know about you, but death by suffocation has always terrified me and I’m a terrible sufferer of claustrophobia.  Which made this book all the more frightening for me.  I loved it.  I love what the author has done with her story and her characters are an absolute delight.  Highly recommended.

I chose to read and review an eARC of The Craftsman.  The above review is my own unbiased opinion.

The Craftsman by Sharon Bolton was published in the UK by Trapeze Books on 18th October 2018 and is available in hardcover, paperback, eBook and audio formats (please note, the following links are affiliate links): | amazon.co.uk | amazon.com | Waterstones | Book Depository | Goodreads | 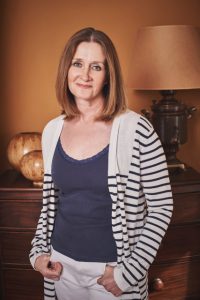 Sharon (formerly SJ) Bolton grew up in a cotton-mill town in Lancashire and had an eclectic early career which she is now rather embarrassed about. She gave it all up to become a mother and a writer.

Her first novel, Sacrifice, was voted Best New Read by Amazon.uk, whilst her second, Awakening, won the 2010 Mary Higgins Clark award. In 2014, Lost, (UK title, Like This, For Ever) was named RT Magazine’s Best Contemporary Thriller in the US, and in France, Now You See Me won the Plume de Bronze. That same year, Sharon was awarded the CWA Dagger in the Library, for her entire body of work.