Hello bookish friends and welcome to day forty-three of #R3COMM3ND3D2019. I am absolutely thrilled to welcome an incredibly popular author and the co-founder of Capital Crime, London’s premier crime writing festival, to share his three #R3COMM3ND3D2019 picks with us today – the brilliant Adam Hamdy. Adam is on the brink of publishing a fantastic new book which is the start of a new series featuring ex-MI6 officer, Scott Pearce. Black 13 will be published in ebook and hardback on 23rd January 2020 with the paperback to follow later in the year. I’ll tell you everything you need to know about Black 13 after we’ve discovered which three books Adam recommends.

So, what is #R3COMM3ND3D2019? It’s about sharing the book love. It’s a chance for authors and book bloggers to shout about three (yes, *only* three) books they love. They can be written by any author, in any genre and published in any way (traditionally, indie press or self-published). But there is a catch. All three books must have been published in 2019. To make things interesting I have added a couple of teeny, tiny rules this year which are; 1) the book must have first been published in 2019 and 2) special editions and reissues do not count. I like to keep you lovely people on your toes. 😉

My Sister, the Serial Killer by Oyinkan Braithwaite
This brilliantly addictive thriller was such a fresh and startling new voice, and deservedly the winner of Capital Crime’s Amazon Publishing Readers’ Award for best debut.

The Night Fire (Harry Bosch #22) by Michael Connelly
If, like me, you’re a fan of Harry Bosch, you won’t be disappointed in this latest outing for the veteran LA detective. Left a missing case file by his former mentor, Bosch is back on the hunt for justice in the city that never sleeps.

To The Lions by Holly Watt
An investigate journalist is tested to the limit on her latest shocking story, in this tense and gripping debut that gives an authentic insiders’ view of Fleet Street.

Wonderful recommendations, thank you Adam. I have My Sister, the Serial Killer on my terrifying TBR and I’ll be adding your other two recommendations as well.

If Adam has managed to tempt you, or if you would like to find out more about the books he recommends, please see the following links:

My Sister, the Serial Killer by Oyinkan Braithwaite
The Night Fire by Michael Connelly
To The Lions by Holly Watt 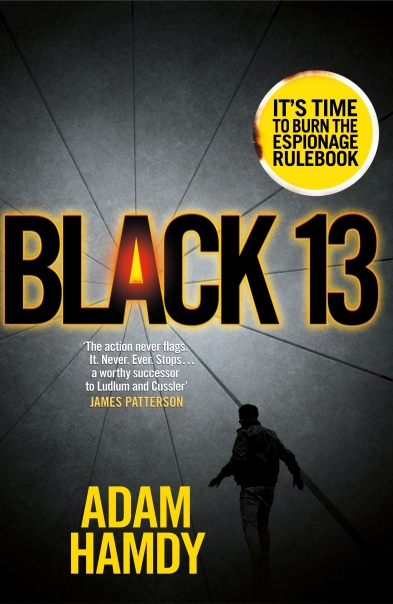 Black 13 is the brilliant first novel in the Scott Pearce series from Adam Hamdy. In this addictive and fast-paced thriller, ex-MI6 officer Pearce is about to show us that in a world where there is no loyalty to the nation state, it’s time to burn the espionage rule book.

An exiled agent. A growing threat. A clandestine war.

The world is changing beyond recognition.
Radical extremists are rising and seek to enforce their ideology globally.
Governments, the military and intelligence agencies are being outmanoeuvred at every step. Borders are breaking down. Those in power are puppets.
The old rules are obsolete. To fight this war a new doctrine is needed.
In a world where nothing is at it seems, where trust is gone, one man will make the difference.
Meet Ex-MI6 agent and man in exile, Scott Pearce.
It’s time to burn the espionage rule book.
Watch Pearce light the fire.

About Adam Hamdy:
British author and screenwriter Adam Hamdy works with studios and production companies on both sides of the Atlantic.

He is the author of the Pendulum trilogy, an epic series of conspiracy thriller novels. James Patterson described Pendulum as ‘one of the best thrillers of the year’, and the novel was nominated for the Glass Bell Award for contemporary fiction, and chosen as book of the month by Goldsboro Books. Pendulum was also selected for the BBC Radio 2 Book Club.

Prior to embarking on his writing career, Adam was a strategy consultant and advised global businesses in the medical systems, robotics, technology and financial services sectors, experience that has given him a useful insight into many industries.

Adam has a law degree from Oxford University and a philosophy degree from the University of London. He is a seasoned rock climber, skier and CPSA marksman.

Adam is a co-founder of Capital Crime. He is also the membership coordinator for the ITW Debut Authors Program.

If you’re a book blogger or an author and you have three books published this year which you want to shout about then please complete the following form (or click this link: https://forms.gle/PE483qCyrKEgV5Uq6)