“On an island off the windswept Irish coast, guests gather for the wedding of the year – the marriage of Jules Keegan and Will Slater.

The wedding cake has barely been cut when one of the guests is found dead. And as a storm unleashes its fury on the island, everyone is trapped.

All have a secret. All have a motive.
One guest won’t leave this wedding alive . . .”

Hello and welcome to damppebbles. I am delighted to be sharing my review of the astonishingly good The Guest List with you today. The Guest List was published in the UK by HarperCollins on 20th February 2020 and is available in hardcover, digital and audio formats with the paperback to follow in September. I received a free eARC of The Guest List but that has in no way influenced my review.

I was a huge fan of Foley’s The Hunting Party when it was released last year. So much so, it made it onto my top ten (ish) books of 2019! So I was really looking forward to getting stuck into this latest release. It did not disappoint one jot! I loved The Guest List. Before I started reading, I was struggling with my reading mojo. Its bags were packed and were sat by the front door. It was determined to leave. Then I picked up this book, absolutely fell in love with it and my reading mojo has been content ever since. The magical healing power of Lucy Foley’s words and characters!

I was a little surprised to find that The Guest List is in a very similar format to The Hunting Party. A group of people gather in a remote location. All of the characters have secrets of their own and a motive for committing a murder. You know someone is going to die — but you don’t know who the victim is until near the end of the book, nor whodunit! Honestly though, who cares?! If it ain’t broke, don’t fix it – I was always told.

Jules Keegan and Will Slater are getting married, and it’s going to be the showbiz wedding of the year. The venue is a crumbling Folly on a remote island off the Irish coast, but wedding planner, Aoife, has everything under control. This is her first big gig and she’s hoping the glitz and the glam of the occasion will bring in lots of future business. But despite the smiling faces on the outside, bitter rivalries and jealous feuds burn deep within the hearts of the guests. This will be the wedding of the year, but for all of the wrong reasons. Spirits are high, the alcohol flows and murderous revenge is planned…

This is a wonderfully entertaining book which I absolutely devoured. I loved it and it got a special mention on my top ten (ish) books of 2019 for being so utterly brilliant. I love a good mystery and this is a truly excellent one. The story is told from several points of view. Each chapter revealing a little more of why it’s narrator could indeed be a murderer. Once again, the identity of the victim is not revealed until the end of the book and it worked so well, keeping me on the edge of my seat! Between you and I, there were a number of dastardly characters I was hoping it would be!

Foley really uses her setting to optimum effect creating an eerie and atmospheric stage for her characters. The setting is as much a part of the story as the characters are, with the swirling winds, the desolate beaches, the raging storms and the cries of the cormorants circling overhead. It’s not hard to imagine the isolation and the solitude the characters on the island feel. Particularly when things start to go badly wrong.

Would I recommend this book? I would, yes. It’s wonderful and such an entertaining read. The ending is very satisfying (much like the entire book really) and if it hadn’t already featured on my top books of 2019 list then it would be a strong contender for this year’s selection (maybe it still will feature – it was published this year, after all!). Foley is a very talented writer, this is such a brilliant book and I highly recommend you check this one out.

I chose to read and review an eARC of The Guest List. The above review is my own unbiased opinion.

The Guest List by Lucy Foley was published in the UK by HarperCollins on 20th February 2020 and is available in hardcover, audio and digital formats (please note, the following links are affiliate links which mean I receive a small percentage of the purchase price at no extra cost to you): | amazon.co.uk | Waterstones | Foyles | Book Depository | Goodreads | 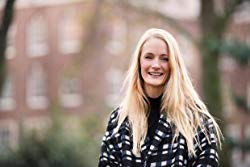 Lucy Foley studied English Literature at Durham and UCL universities and worked for several years as a fiction editor in the publishing industry, before leaving to write full-time. The Hunting Party is her debut crime novel, inspired by a particularly remote spot in Scotland that fired her imagination.

Lucy is also the author of three historical novels, which have been translated into sixteen languages. Her journalism has appeared in ES Magazine, Sunday Times Style, Grazia and more.