“Can you keep a secret? Your life depends on it…

When Bridget Reid wakes up in a locked room, terrifying memories come flooding back – of blood, pain, and desperate fear. Her captor knows things she’s never told anyone. How can she escape someone who knows all of her secrets?

As DS Imogen Grey and DS Adrian Miles search for Bridget, they uncover a horrifying web of abuse, betrayal and murder right under their noses in Exeter.

And as the past comes back to haunt her, Grey must confront her own demons. Because she knows that it can be those closest to us who hurt us the most…”

Hello and welcome to damppebbles. Today I am delighted to be sharing my fifth 20 Books of Summer review with you, which is for The Secret by Katerina Diamond. The Secret is the second book in Diamond’s DS Imogen Grey series and was published in all formats by Avon Books on 20th October 2016. I received a free eARC of The Secret but that has in no way influenced my review.

I confess, I’m a terrible book blogger. I read The Teacher (the first book in the DS Grey series) in 2017 and despite really enjoying it, I completely failed to review it. I read it shortly before my first massive reading slump (I can assure you, it was NOT the cause) and then never went back to write down my thoughts. I do regret that, as this series feels elevated from many of the run of the mill police procedurals out there. Diamond has no fear. She’s quite happy to shock and stun her audience with her graphic descriptions and the acts of violence her characters carry out. Which, of course, I absolutely love. I’m a reader who doesn’t shy away from a more brutal crime fiction novel. In fact, I wish more authors were as fearless as Diamond is, and were prepared to push the situations their characters find themselves in a little more.

Having recently returned to work, DS Imogen Grey and her partner, DS Adrian Miles, are tasked with finding a missing woman, Bridget Reid. Bridget was last seen by a hapless bystander half-conscious on the bank of a river after being pursued by two men. Both Grey and Miles know that they’re against the clock and they need to find Bridget soon, before the unthinkable happens. But their investigation grinds to a halt and they struggle to find a direction. As they dig deeper, more and more horrifying secrets are unearthed. Can they find Bridget alive, before it’s too late…?

This book is so much darker than the cover leads you to believe, and I kinda like that. With its grisly opening and it’s fast-paced story, led by a strong and gutsy female lead, it’s hard to not get sucked into this book from the get-go. Whether you’ll end up liking Detective Grey is another matter altogether but I think I’m certainly warming to her. One of the things I remember from reading the first book – The Teacher – was that I liked DS Adrian Miles more than Grey. But the more I get to know this character, the more I like what she’s about.

The story is multi-layered with lots going on to keep your interest. Everybody has a secret to some degree in this novel. There are chapters set in the present which follow the current investigation in Exeter with DS Grey and DS Miles. Then there are chapters set in the past – two years previous – which follow DS Grey and another officer, DS Sam Brown, on a different investigation in Plymouth. The reader discovers so much about Imogen and her past in this book, which I really enjoyed. Then there are some quite harrowing chapters from a young boy throughout the years who is unnamed but we get to follow him as his domineering and violent father carries out his despicable plans.

Would I recommend this book? Yes, I would but it’s not for the squeamish. There are some pretty grisly scenes in The Secret which I loved! The constant shift from the past to the present was a little disorientating at times, particularly if I had put the book down for a few hours before returning to it. But sitting here cogitating on the novel as a whole, I really enjoyed it and have since been able to piece the different aspects together. All in all, a very entertaining read and I really look forward to catching up with Grey and Miles again soon. Recommended.

I chose to read and review an eARC of The Secret. The above review is my own unbiased opinion.

The Secret by Katerina Diamond was published in the UK by Avon Books on 20th October 2016 and is available in paperback, audio and digital formats (please note, the following links are affiliate links which means I receive a small percentage of the purchase price at no extra cost to you): | amazon.co.uk | Waterstones | Foyles | Goodreads | Book Depository | 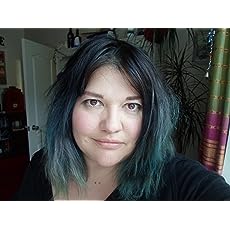 Katerina is the author of the Sunday Times Best Selling Exeter based crime thriller series – starting with ‘The Teacher’ and followed by The Secret, The Angel, The Promise and Truth or Die. Katerina is currently working on her seventh novel which is a standalone.

Katerina currently lives in East Kent. Katerina was born in Weston-super-Mare and has lived in various places since including Greece, Cyprus, Derby, East London and Exeter. Katerina watches way too much TV.