“How do you catch a killer who leaves no trace?

A victim killed with a single, precise stab to the heart appears at first glance to be a robbery gone wrong. A caring, upstanding social worker lost to a senseless act of violence. But for Detective Kim Stone, something doesn’t add up.

When a local drug addict is found murdered with an identical wound, Kim knows instinctively that she is dealing with the same killer. But with nothing to link the two victims except the cold, calculated nature of their death, this could be her most difficult case yet.

Desperate to catch the twisted individual, Kim’s focus on the case is threatened when she receives a chilling letter from Dr Alex Thorne, the sociopath who Kim put behind bars. And this time, Alex is determined to hit where it hurts most, bringing Kim face-to-face with the woman responsible for the death of Kim’s little brother – her own mother.

As the body count increases, Kim and her team unravel a web of dark secrets, bringing them closer to the killer. But one of their own could be in mortal danger. Only this time, Kim might not be strong enough to save them…

A totally gripping thriller that will have you hooked from the very first page to the final, dramatic twist.”

Hello and welcome to damppebbles. It’s good to see you! Today I am delighted to be sharing my fourth 20 Books of Summer review with you and it’s for Blood Lines by Angela Marsons. Blood Lines is the fifth book in the absolutely excellent Detective Kim Stone series, it was published by Bookouture on 4th November 2016 and is available in all formats. I chose to read and review a free eARC of Blood Lines but that has in no way influenced my review.

I’m ashamed to admit that the Detective Kim Stone series by the incredibly talented Angela Marsons is another crime fiction series I’ve fallen behind with. (I’ve also discovered, which has thrown a rather massive spanner in the works, that I’ve managed to miss a book out 😲. Not a problem, it can be rectified, but…doh! I have an awful lot of catching up to do anyway as currently, there are 12 books in the series!) It’s been a while since I last spent time with Kim and the team but reading Blood Lines was like catching up with old friends you haven’t seen for years. It felt as though no time had passed and I was straight back into the heart of the investigation with this small but elite team.

Kim and her team are called to investigate a brutal murder carried out by a cold-blooded, professional killer. The body of a highly considered social worker is found in her car with a single, precise stab wound to the chest. Why someone would kill Deanna Brightman is anyone’s guess. But then a second body is discovered and despite the same kill method, the victims are polar opposites. This time the victim is a young drug addict. What connects these two women? Kim and the team are baffled and desperately search for a sliver of a clue to help piece together who would commit such an atrocious crime on two such different individuals. But Kim is distracted. Having received a letter from her nemesis, the despicable Dr Alexandra Thorne, Kim’s attention isn’t 100% on the investigation. Will the team discover what connects the victims, before it’s too late…?

Holy moly, there’s a lot going on in this book! Not only does Detective Kim Stone have to deal with a tricky murder investigation, there’s the very dark and ominous threat of Kim’s arch-enemy, the absolutely brilliant and dastardly Alex Thorne, to contend with as well. Thorne is locked up tight in Drake Hall Prison but that doesn’t stop her evil, meddling ways – no siree! She’s such a brilliantly written character who not only gets under Kim’s skin, but the reader’s skin as well. I loved the chapters where Kim visits Thorne in prison. There’s so much power play and manipulation between the two women and I found myself getting totally lost in Marsons’ words and characters.

The investigation in Blood Lines is really interesting and I struggled, along with the team, to see what the connection between the victims was. I was, of course, playing amateur sleuth but I’m delighted to say I failed miserably and the big reveal was a complete surprise. I felt the reader discovered a lot more about Kim in this book, which I personally, really enjoyed. Reference has been made to her traumatic childhood in previous novels and her intense hatred of her mother, but the reader finds out so much more in Blood Lines than we’ve been party to in past novels. I’ve always been fond of Detective Kim Stone but I really respect and admire the character more having read this book.

Would I recommend this book? I would, yes. Even though I’ve only read up to book five (minus one in the middle somewhere….😬) I would heartily recommend this entire series. Marsons is an incredibly talented writer and this is such a clever and accomplished series. There’s always a twist in the tale, an extra surprise thrown in to take your breath away and I love that about Marsons’s books. Edgy, compelling reading which is 100% entertaining from start to finish. Highly recommended.

I chose to read and review an eARC of Blood Lines. The above review is my own unbiased opinion.

Blood Lines by Angela Marsons was published in the UK by Bookouture on 4th November 2016 and is available in paperback, audio and digital formats (please note, the following links are affiliate links which means I receive a small percentage of the purchase price at no extra cost to you): | amazon.co.uk | Waterstones | Foyles | Book Depository | Goodreads | 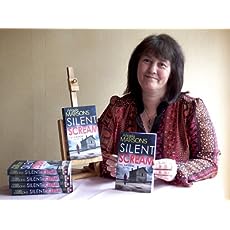 Angela Marsons is the Wall Street Journal and USA Today bestselling author of the DI Kim Stone series and her books have sold more than 4 million in 5 years.

She lives in Worcestershire with her partner and their 2 cheeky Golden Retrievers.